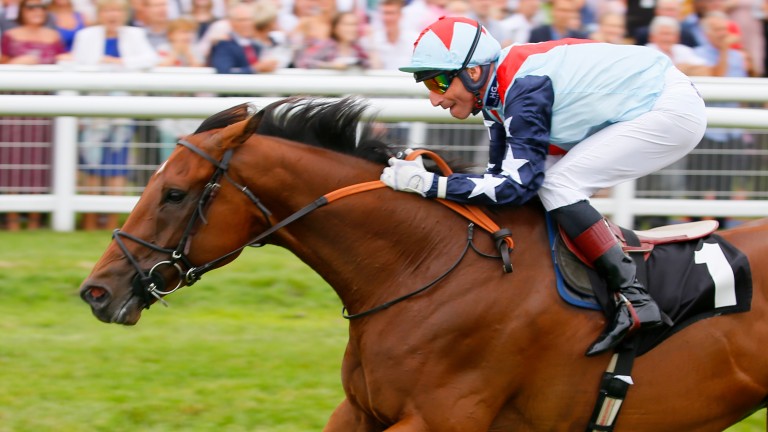 Some weekends call for the heavy artillery but this is one for the long-range snipers. Races like the Hungerford Stakes, Geoffrey Freer Stakes and the Great St Wilfrid will have been selected months ago, the date circled and preparations finely tuned.

They are specialist events – in the case of the Newbury races because of the rare number of races over seven furlongs and 1m5½f – while valuable sprint handicaps like the Ripon event always take some targeting.

It can be hard to make it work in different disciplines and last year's Hungerford winner Sir Dancealot is a case in point. The five-year-old is bidding to become the first horse since the 1960s to win back-to-back runnings and he has every chance over a trip at which he thrives. If six furlongs is too quick, and a mile plus is too far, then seven is just right.

Sir Dancealot is seven from 15 at today's trip – and two from 14 at all others. His main market rival Safe Voyage is similar, with eight wins from 15 starts at seven and one from five at all other trips.

There is not a Group 1 for three-year-olds and older in Britain, so the Hungerford, along with last month's Lennox – in which Sir Dancealot completed back-to-back victories – and next week's City of York Stakes are pinpointed a long way off and worked back from. A double-double would certainly be worth getting worked up about.

Stars of the future

In recent years the likes of Defoe and the talented but ill-fated Hamada have first shown they were ready for the step up to Group 1 level in the Geoffrey Freer Stakes, and while Andrew Balding's six-year-old Morando is a worthy favourite based on his Ormonde win this year – he is not the most likely future star.

Given Sir Michael Stoute's penchant for slowly bringing along his horses the Queen's highly progressive Sextant catches the eye as a likely sort. The five-strong field is completed by three-year-olds who could force their way into the picture for the season's final Classic, or perhaps even the Melbourne Cup.

Mount Athos and Red Cadeaux have used the Geoffrey Freer en route to Melbourne, as did Hamada last year, and the world's richest staying contest will surely become a tempting target for connections of the winner.

Today is a colourful day, in more ways than one. Unibet and Newbury deserve praise for joining forces to publicise the #GoRacingGreen campaign, while at Newmarket one of the highlights of the day of any racing photographer – or racing-mad children – takes place in the shape of the greys race.

The six-furlong sprint makes for an excellent spectacle, while the #GoRacingGreen day is designed so those who otherwise may not get to enjoy the show have a safe space to do so.

Racegoers are encouraged to wear something green to show their awareness and support for those with mental health concerns and safe and quiet spaces have been introduced at the track for the first time on a high-profile ITV Saturday meeting.

The ITV4 action kicks off with the race formerly known as the Washington Singer. The likes of Just The Judge, Belardo and Hungerford hope Hey Gaman have won this in the past and Kevin Ryan's Superlative Stakes runner-up Juan Elcano is a short price to join them.

A consolation race for the Great St Wilfrid, the fact it is 10-1 the field indicates just how wide open a contest it is. Mick Easterby won the race last year and his nephew Tim has a strong hand with four of the 20-strong field. His challenge is headlined by Hyperfocus and Flying Pursuit.

Newmarket hosts one of the season's great sights and biggest novelties as 16 greys go hammer and tongs over six furlongs. There has not been a winning favourite in the last ten years, but there has also been just one winner returned at an SP bigger than 11-1 so it pays to look towards the head of the market.

Ripp Orf could kick off a big 40 minutes for David Elsworth and Messrs Benham, Whitford, Quinn and Quinn as he looks to give the Sir Dancealot team a timely boost in the race before the Hungerford.

David O'Meara always targets the Great St Wilfrid, he has had three winners and a second since 2011. He saddles joint-favourite Summerghand and three others who are all shorter than 18-1.

The main race of the day, in which seven-furlong specialists Safe Voyage, Sir Dancealot and Hey Gaman will battle it out for Group 2 honours. Sir Dancealot is bidding to become the first dual winner of the race since the 1960s, a decade his trainer David Elsworth refers to as his twenties.

FIRST PUBLISHED 6:00PM, AUG 16 2019
The world's richest staying contest will surely become a tempting target for connections of the winner