'Special' colours back in the winner's enclosure as Line strikes 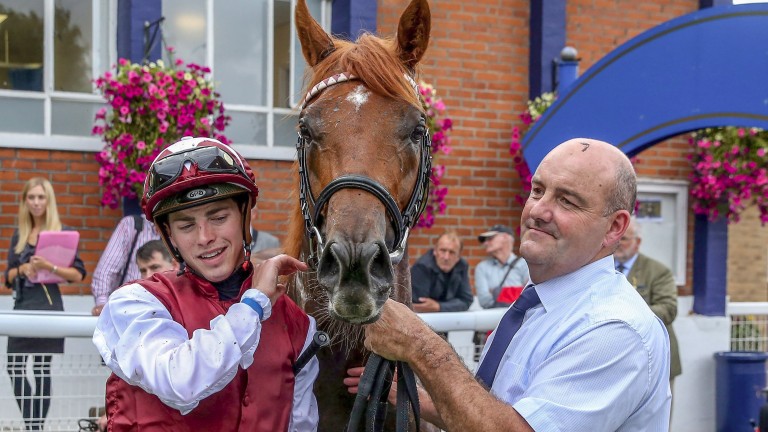 Royal Line and James Doyle in the winner's enclosure
GROSSICK RACING
1 of 1
By Maddy Playle UPDATED 10:05AM, SEP 6 2017

The famous maroon and white silks, carried by stars such as Oh So Sharp, Pebbles and Singspiel, were back in the winner's enclosure on Monday after Royal Line justified 4-6 favouritism to win at Windsor for Sheikh Mohammed's daughter Sheikha Al Jalila.

Royal Line was the second runner for the owner after Graffiti Master's fourth at Sandown on Friday, and ultimately ran out a very easy winner. The son of Dubawi was settled at the rear in the early stages by James Doyle but picked up strongly to win by two and three-quarter lengths.

Royal Line, whose dam Melikah is a half-sister to Galileo and Sea The Stars, was making his debut in the 1m3½f maiden for John Gosden, who also trains the remainder of Sheikha Al Jalila's string.

Doyle said: “It’s great for Sheikh Mohammed’s family to get involved and the first winner for Sheikha Al Jalila in these colours is fantastic – I'm sure she’ll be pretty pleased.

“I’ve grown up watching them and they’re pretty special colours. It’s nice to see them back in the winner’s enclosure."

The last year the colours were regularly seen in Britain was 2007, and it may not be long before we receive another blast of nostalgia, as the blue and white colours of Sheikh Mohammed's first winner Hatta will soon be seen on the track for his son, Sheikh Zayed.

Sheikh Mohammed instigates return of the maroon and white

FIRST PUBLISHED 4:28PM, SEP 4 2017
It’s great for Sheikh Mohammed’s family to get involved and the first winner for Sheikha Al Jalila in these colours is fantastic