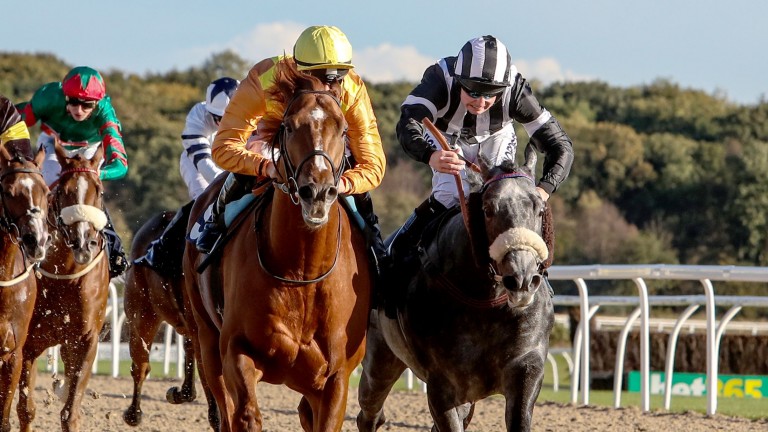 Last year's runner-up Spanish City has been the buzz horse around Newmarket this week and there is a lot optimism he can turn the tables on reopposing winner Burnt Sugar and Shady McCoy, who he dead-heated with in second that day.

Trainer Roger Varian nominated another crack at this cavalry charge after his chestnut finished an eyecatching third to stablemate Flavius Titus in a 6f handicap at this track in June.

Now a six-year-old, Spanish City has often run well in big handicaps like this in recent years without quite getting his head in front, and on many occasions when the ground had gone against him at the last minute.

Now with a clear run into the race and after a sparkling workout on the local watered gallop on Tuesday morning. Spanish City could be about to add to Varian's other big handicap successes this year which include the Victoria Cup and the Wokingham.

He said: "Spanish City is in good form and I think he'll run a big race. He was a bit unlucky in this last year and hopefully the showers stay away as he doesn't like loose ground. He ran a nice trial for this last time and has worked well since."

Burnt Sugar bids to become the first horse to win this in successive years since Mine in 2005-6 and is joined by stablemate Admirality in his repeat bid.

Trainer Roger Fell is a master with these types of handicappers and Burnt Sugar will find this much more his bag after mixing it with Safe Voyage in a Group 3 at Haydock last time.

Roger Fell: has a strong hand in the Bunbury Cup
Martin Lynch (racingpost.com/photos)

Also sporting the Middleham Park colours is Admirality, who ran his best race for connections in a race similar to this when second to Firmament at York last month.

Fell said: "This has been the long-term plan for Burnt Sugar ever since he won it last year, but I hope there's no jar in the ground as he needs to get his toe in. Admirality goes there in good shape and has a good draw at a track that can suit front-runners."

Ambassadorial out to trump his rivals

There are also positive vibes around HQ for the unexposed Ambassadorial, who began his new career with Jane Chapple-Hyam in the best possible circumstances when winning on the all-weather at Chelmsford.

Chapple-Hyam struck at this meeting a year ago when Naval Intelligence scored in her colours in the Listed Sir Henry Cecil Stakes and she could prosper further with this Godolphin cast-off, whom she bought for 20,000 guineas at the February sales.

Jockey John Egan said: "He's a horse on the up who's switching from the all-weather to the turf. He has a big chance on what we've seen at home."

David O'Meara, trainer of So Beloved, Three Saints Bay & Hajjam
So Beloved ran a good race in the Royal Hunt Cup and this seven furlongs will suit him better than a stiff mile. He'll run his race and should be there or thereabouts. Three Saints Bay has been a little bit disappointing on his last couple of runs and is on a bit of a recovery mission. Hajjam has won on quick ground but is probably better on an easier surface. We've put cheekpieces on to help his concentration.

Richard Spencer, trainer of Keyser Soze
He's in good form at home and should enjoy the fast pace they go in these races. I don't know about the draw [2], but we plan to drop in.

William Haggas, trainer of Solar Gold
She's an interesting filly who I think might run a good race. She was a bit unfortunate last time and I think the conditions and fast pace will suit her.

Bruce Raymond, racing manager to Sheikh Juma Dalmook Al Maktoum, owner of Crossing The Line
He's been running well without winning of late and I think he has chances of a place in a very competitive race.

Stuart Williams, trainer of Alemaratalyoum
He ran a nice race at Epsom last time and we're hopeful of a good run.

FIRST PUBLISHED 6:00PM, JUL 12 2019
Spanish City is in good form and I think he'll run a big race. He was a bit unlucky in this last year