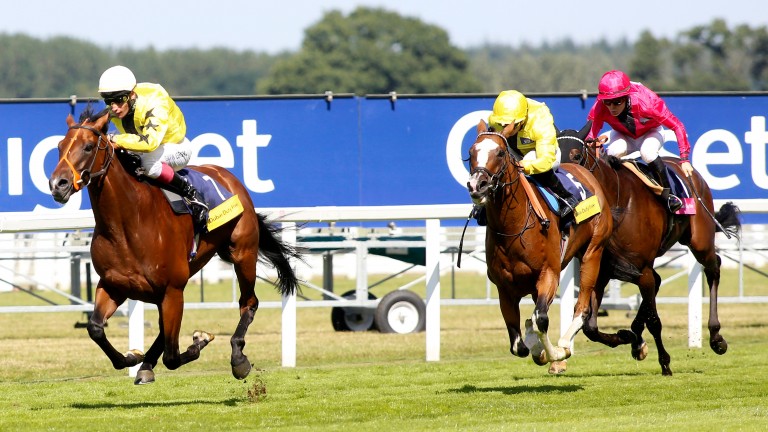 Gavin Lerena: steered Danehill Kodiac (left) to victory at the Shergar Cup last year, securing a double on the day
Julian Herbert
1 of 1
By Jack Haynes 4:58PM, MAY 16 2017

There is a distinct international flavour to the action at Bath on Wednesday evening with leading South African jockey Gavin Lerena riding for Charlie Hills, with whom he will be based for the summer.

Lerena’s only previous visit to Britain came last year when the three-time champion apprentice in South Africa notched a 285-1 double at the Shergar Cup at Ascot - an experience which left the rider wanting more.

Lerena is to be sponsored by Chelsea Thoroughbreds, with the owners set to give the rider opportunities on their 27 horses spread between nine trainers in Britain.

Lerena said: “Racing over here is just so historical and everyone is so passionate about it. The racing gains worldwide coverage, so hopefully I can find one or two nice horses for the big days.”

Lerena was a key member of the Rest of the World team that landed the Shergar Cup in August, with notable victories coming aboard the Amanda Perrett-trained 25-1 shot Arch Villain in the 2m handicap and Richard Hannon’s Danehill Kodiac in the 1m4f handicap.

Despite being pipped to the Alistair Haggis Silver Saddle Trophy by French rider Thierry Jarnet, Lerena describes the day as “one of the best of his career”.

He said: “Never mind riding a double, just to be at Ascot was truly amazing. The surface was beautiful and the track was testing. The winners just put the cherry on the top.”

Lerena, 31, will be hoping to enjoy a perfect start aboard the Hamdan Al Maktoum-owned Mudajaj in the 1m3½f maiden (5.55),  in which Trevor Whelan becomes the latest jump jockey to combine riding under two codes by partnering Neil Mulholland's Dance Rock.

If all goes to plan this campaign, Lerena may become a more familiar figure in Britain in the future.

He said: “If it all goes well I’d love to spend every summer in Britain. I don’t think I’d winter particularly well over here but summer racing is magnificent and something everyone wants to be a part of. It’s the place you want to be.”

FIRST PUBLISHED 4:50PM, MAY 16 2017
The summer racing is magnificent and something everyone wants to be a part of. It’s the place you want to be

'I think he's a huge price' - leading trainers on their Jersey contenders Connections look to Goodwood with Battaash after 'leg-weary' Royal Ascot fourth 'He's very much on the up' - progressive sprinters clash on the Knavesmire Royal Ascot fever is everywhere - even Joe Biden can't get enough of it Matt Chapman, after-timers and more: the ten most annoying things in racing Shadwell 'trimming' continues with more than 100 horses catalogued for July sale