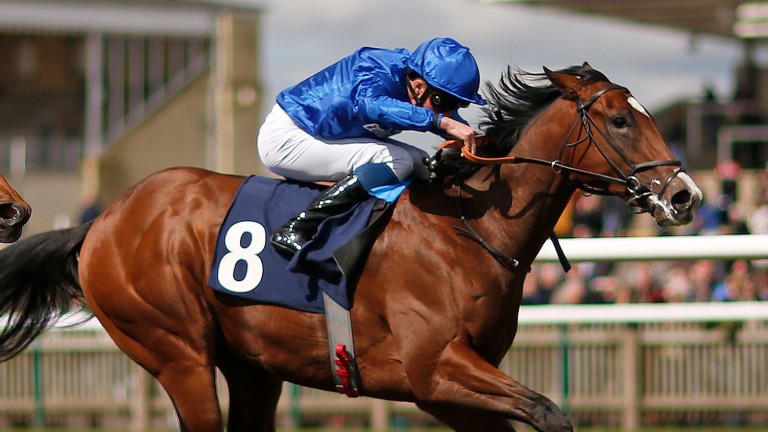 Sound And Silence bids to follow up his Newmarket win in the National Stakes
Alan Crowhurst
1 of 1
By Richard Birch 6:00PM, MAY 24 2017

Sound And Silence had one of his four Better Odds With Matchbook National Stakes rivals, Frozen Angel, trailing 12 lengths in his wake at Newmarket last month, but there is unlikely to be a great deal between the pair as they renew rivalry.

The Godolphin-owned Sound And Silence created a favourable impression when landing that maiden by half a length from Never Back Down, and he has pleased trainer Charlie Appleby since.

“I was delighted with his first start at Newmarket and that race has worked out well enough,” he said. “He has come forward for the run, a stiff five furlongs on good ground should suit, and he looks the one to beat.”

Frozen Angel, who finished last of nine at Newmarket, had clearly benefited enormously from that debut when taking an Ascot conditions event apart next time out.

After showing blazing speed in the early and middle stages, Tom Dascombe’s juvenile stayed on strongly to slam Corinthia Knight by three and a quarter lengths.

“He has got 12 lengths to find with Sound And Silence on that Newmarket run, but has obviously improved a lot since,” Dascombe said. “He's a nice individual and we’ll decide after Sandown whether to go for Norfolk or the Coventry at Royal Ascot.”

The Clive Cox-trained Chagatai and Karl Burke’s Havana Grey have won at Bath and Ayr, leaving Haddaf as the only maiden in the five-runner line-up.

“He has run very well in two starts without winning,” trainer James Tate said. “The draw could have been kinder.”

Tate is responsible for one of the more fancied performers in the Listed Matchbook Traders Conference Heron Stakes, namely Law And Order.

Although out of his depth behind the mighty Churchill in the 2,000 Guineas at Newmarket last month, the son of Lawman had previously finished a highly creditable third to Khalidi in the Listed Feilden Stakes.

“He was outclassed in the Guineas, but won a Listed race at Lingfield first time out this season and should have every chance at Sandown,” Tate said. “He's in very good form.”

Escobar, winner of two of his three starts as a juvenile in 2016, has taken time to come to hand this spring, but returns to action on the back of some encouraging home work.

The Famous Name colt was sent off a hot favourite for Newmarket’s Group 3 Tattersalls Stakes last September after recording two Newbury wins. He disappointed at headquarters, finishing only seventh of eight to Larchmont Lad, but clearly retains plenty of potential.

“Escobar didn’t come forward in time to make it to the Guineas,” trainer Hugo Palmer said. “In any case it would have been too quick for him at Newmarket and he didn’t like the Dip when beaten there last season. It will be nice to get his season off an running.”

The Sir Michael Stoute-trained Zainhom will have plenty of supporters after shaping nicely in third place behind subsequent 2,000 Guineas runner-up Barney Roy in the Group 3 Greenham Stakes over seven furlongs at Newbury.

This step back up to a mile could see the lightly raced son of Street Cry in an even more favourable light, and he holds an entry in the Group 1 St James’s Palace Stakes at Royal Ascot.

FIRST PUBLISHED 6:00PM, MAY 24 2017
He has come forward for the run, a stiff five furlongs on good ground should suit, and he looks the one to beat