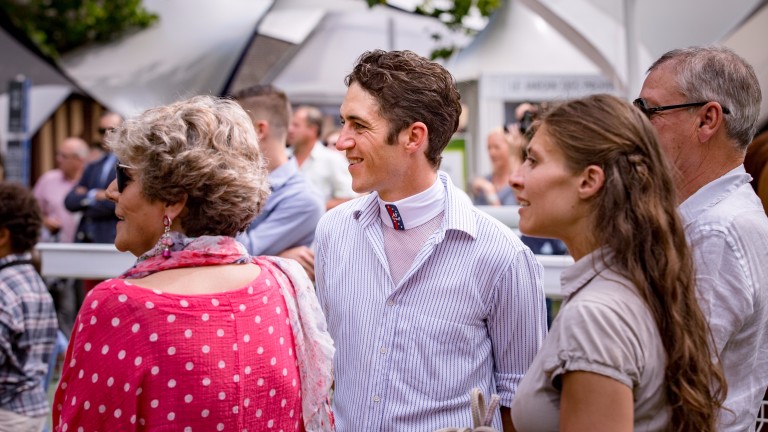 Chirstophe Soumillon (centre): has teamed up with Mike de Kock to win this race for the last five years
Zuzanna Lupa
1 of 1
By Jason Ford 5:06PM, JAN 26 2017

South African Mike de Kock has saddled a record eight winners of Thursday’s 1m1f Group 2 Al Rashidiya and is seeking a sixth consecutive victory, with horses partnered by Christophe Soumillon, in this year’s renewal with Light The Lights.

The five-year-old won the course and distance Singspiel Stakes on his local and stable debut on the first night of the Carnival three weeks ago, form that looks exceptionally strong after the horse he narrowly denied, Championship, ran out an easy winner of last week’s 7f Group 2 Al Fahidi Fort.

De Kock said: “We were delighted with him on the first night and he has definitely improved for the run. We thought it was a good effort at the time so to see Championship win last week enhanced that belief.

“He should at least go close.”

The Richard Fahey-trained Gabrial was well behind Light The Lights last time, while David Elsworth’s Master The World never really threatened on his local debut so a bigger danger may be provided by Mr Owen.

Trained in France by Francois Rohaut for Qatar Racing, Mr Owen arrives having won his most recent outing, the Listed Prix Lyphard on the Deauville all-weather at the end of November, and is partnered by retained rider Oisin Murphy.

Saeed bin Suroor saddles Promising Run, winner of the Group 2 Rockfel Stakes as a juvenile in 2015.

The Newmarket trainer said: “She did not like the dirt at Meydan last year and ran very well when third in the Musidora at York. She won a nice race in Turkey and seems in very good form.”

Stablemate Very Special will attempt to defend her crown in the Group 2 Cape Verdi, a mile feature restricted to fillies and mares.

After winning this last year, the daughter of Lope De Vega followed up in the 1m1f Group 2 Balanchine and was beaten just three lengths in the Group 1 Dubai Turf on World Cup night.

She only ran once in Europe last year, when second to Alice Springs in the Group 1 Falmouth Stakes.

Bin Suroor said: “She has been working nicely and, as she did last year, seems to have blossomed here in Dubai. We expect a very big run.”

Heading the opposition is the De Kock-trained Tahanee, a dual Group 3 winner in her native Argentina who looked very unlucky when seventh in a mile handicap on her local and stable debut two weeks ago.

“She was stopped at least twice in the straight,” said De Kock.

“She's a very nice filly but this is the strongest renewal of the Cape Verdi I have seen and arguably the hottest race of the Carnival thus far.”

Murphy rides Opal Tiara for Mick Channon, while Andrea Atzeni is aboard Roger Varian’s Realtra, but the strongest of the British challenge could come from Muffri’Ha.

Trained by William Haggas, she won her last three starts in England last year, including the Group 3 Darley Stakes at Newmarket.

Pat Cosgrave, aboard for all three of those victories, retains the partnership and said: “I have sat on her twice since she arrived and she seems in great form. She deserves her chance at this level.

“Very Special and Tahanee could be the main dangers in a race that looks to have a lot of strength in depth.”

The card also includes the 7f UAE 2000 Guineas Trial on dirt in which both Bin Suroor and fellow Godolphin trainer, Charlie Appleby, have two runners.

The Appleby duo, Van Der Decken and Fly At Dawn, clashed in a course and distance conditions race a month ago when the former came out on top, receiving weight from his stable companion, which is not the case on Thursday.

Bin Suroor saddles Top Score, a winner once in seven starts in Europe, and Best Solution, successful in the Group 3 Autumn Stakes at Newmarket in October.

FIRST PUBLISHED 6:00PM, JAN 25 2017
We thought it was a good effort at the time so to see Championship win last week enhanced that belief. He should at least go close