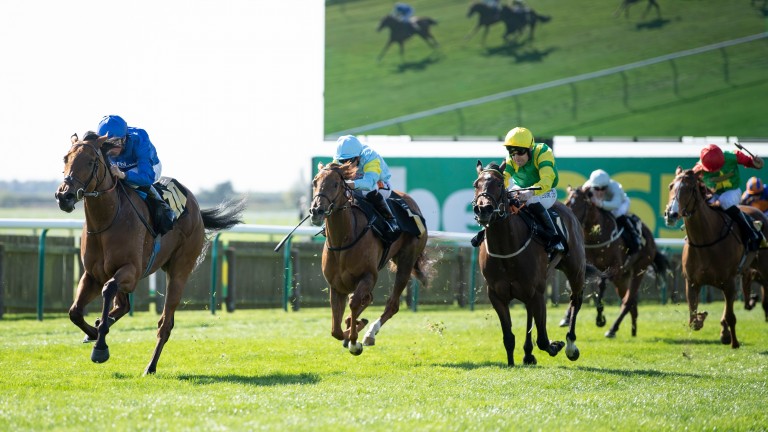 Soliloguy: clears away from Altyn Orda and Eirene in the Nell Gwyn
Edward Whitaker (racingpost.com/photos)
1 of 1
By Bruce Jackson UPDATED 7:16PM, APR 18 2018

Soliloquy raised more questions than she answered after the Godolphin-owned three-year-old produced a solo performance to win the Group 3 Lanwades Stud Nell Gwyn Stakes from the front.

That is because the Dubawi filly does not have a Qipco 1,000 Guineas ticket, although Paddy Power introduced her at 14-1 while others went 12-1 behind favourite Happily.

Soliloquy had not been learning her lines cosseted in Dubai over the winter. Instead, after the hardening from 'the beast from the east', she had blossomed on the Newmarket heath so much in recent days that trainer Charlie Appleby was expecting nothing less than what she delivered in striding clear of Altyn Orda and Eirene, who were left to scrap for second billing.

Appleby said: "We were confident coming into the race – her work recently has been nothing but impressive. The form of her Ascot race has worked out well and her form tied in with quite a few running against her today so we were confident of being bang there.

"We were always going to try to make it and keep it simple and she got a soft lead."

William Buick made the most of that and, after quickening out of the dip inside the final two furlongs, she was in splendid isolation in front – winning by a length and three-quarters come the line.

Asked about the 1,000 Guineas option, Appleby added: "She's not in either Guineas unlike Wild Illusion, who I was impressed with in her gallop before racing here.

"We'd want to keep them apart and, on her pedigree, Soliloquy would go on a quicker surface. With Wild Illusion winning her maiden on soft and then the Marcel Boussac, the ground will be an important factor and we'll sit down nearer the time to decide."

What is certain is that Godolphin are back in the thick of the Classic scene.

Dean Ivory, trainer of third-placed Eirene, also has such a dilemma between the cross-Channel choice.

"I think the French Guineas is where she should go – this is definitely not her ideal track as she stumbled two or three times and still came with her run.

"She's going to be a lot better for the run and is a lovely, honest and genuine filly."

FIRST PUBLISHED 3:53PM, APR 18 2018
We'd want to keep them apart and, on her pedigree, Soliloquy would go on a quicker surface

Can one-of-a-kind Jim Bolger pull off more Group 1 heroics with Poetic Flare? One trainer, one jockey, one horse and one race to note on Royal Ascot day one William Buick goes top in title race as he continues fine run of form 'It's been a great week' - Charlie Appleby's amazing run of success continues Shadwell 'trimming' continues with more than 100 horses catalogued for July sale 'Are we mad?' - connections go to record £38,000 to buy back seller winner