Soldier has leading chance with ground not an issue says Johnston 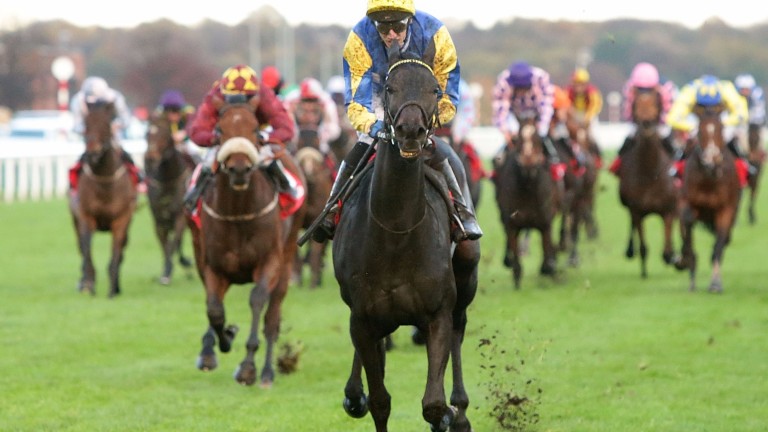 Rarely can so many people have been praying for a downpour before a Saturday feature, but it looks like all supplications have been in vain and there could be a few notable absentees from a race run on heavy ground a year ago.

Doncaster clerk of the course Roderick Duncan took the 'good in places' out of the ground description to leave good to firm on Friday despite 1.2mm of rain.

"The strong wind dried that up," explained Duncan, who added: "There's a serious chance of rain in the early hours of Saturday, 2-3mm possibly."

That may come too late for the fairytale that would be a repeat success for Litigant, who again has top weight of 9st 10lb, but is rated 4lb higher than a year ago when he revelled in the heavy conditions.

Trainer Joe Tuite, who has ended a season of two halves in good form having had just five winners in the first five months, is fearing the worst for his eight-year-old. He is again the mount of George Baker, who won his first Classic with St Leger glory on Harbour Law at the track two months ago.

Soldier In Action failed to make his reserve at the Horses in Training sale so races on for owner Alan Spence.

Big opportunity
In-demand apprentice George Wood, who has ridden 35 winners this year, including one from four rides on Town Moor, has been called up for the first time by Godolphin to partner Prize Money.

A family affair
John Gosden has maintained a strong family tradition started by his father Towser in this handicap, adding five successes of his own, including two in the last seven years.

Wrangler's winning team
Wrangler, who shaped well over course and distance last time, represents the William Haggas and Highclere team who successfully combined to win this with Conduct in 2013.

Joe Tuite, trainer of Litigant
He's in superb form and I'm desperate to run him as I think we go there with a realistic chance of winning again. We need the rain to arrive though and are praying for showers to hit the course. He'll travel up and I'll walk the track and take stock then. There's very little for him to run in.

Saeed Bin Suroor, trainer of Prize Money
He worked well on the Limekilns last week and I expect him to run a good race. The hood at home has helped him relax. He had a break after Goodwood as he'll be going to Dubai this winter. He's improving and will be better at four.

Michael Bell, trainer of Fabricate
This has been the plan since he won at Leicester and he has a good draw, but the ground being unseasonably quick isn't in his favour and a drop of rain would be very welcome.

Eve Johnson Houghton, trainer of What About Carlo
He hasn't got a great draw and we're hoping for a bit of rain. He's in great form and we've nothing to lose just as long as it's not too fast. He's always looked like staying this longer trip.

Hughie Morrison, trainer of Not So Sleepy
We've spent the year waiting for soft ground. We need some rain to ease the ground, otherwise he won't be running. I'll take him there and walk the course before deciding.

Andrew Balding, trainer of Montaly
Hopefully there'll be some rain, which would help. He's down in class and dropping in trip.

Charlie Johnston, assistant to Mark Johnston, trainer of Soldier In Action
He's won on soft at Doncaster but handles all ground alike, so that's not an issue – the big question is whether he can handle the 11lb rise to a mark of 105 for his Goodwood win last month, when he couldn't have been any more impressive. He has a leading chance.

Jim Goldie, trainer of Sir Chauvelin
He's fresh and well after his one poor run, when hurting a knee at York. He's had a good season and I think he'll like the ground.

John Gosden, trainer of Cape Cova
He won well the other day but on different ground and over a different trip. Going up 9lb for winning a neck was a severe bit of handicapping and to that extent it might have gone against him.

Declan Carroll, trainer of Buonarroti
He needs cut in the ground to be at his best, as he showed last year. It would be nice to go one better but the more rain the better for his chances.

Alan King, trainer of William Hunter
He didn't appear that comfortable on the ridges at Newmarket when disappointing last time and this flat course should suit him better. He’s had a long year, with January and March the only months he didn't run, but he seems in good form so we're rolling the dice one last time.

William Haggas, trainer of Wrangler
He needs rain so I'm very wary, but he's been waiting for the race. He got away with the ground last time but we'll reassess after the two-year-olds have run.

FIRST PUBLISHED 6:00PM, NOV 4 2016
I am desperate to run him as I think we go there with a realistic chance of winning again