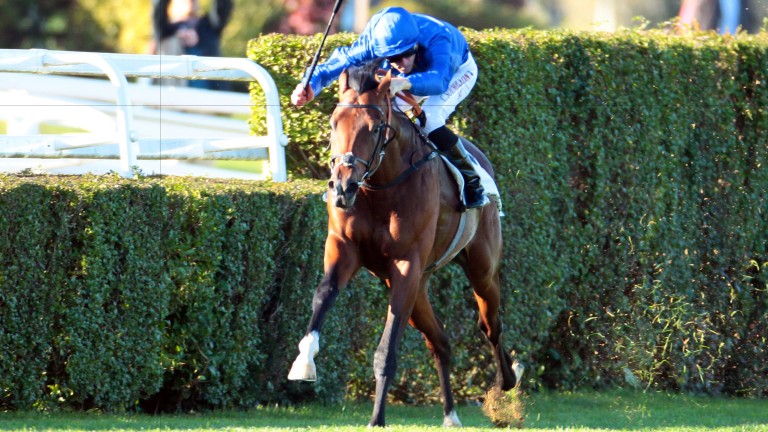 Snow Thunder and Christophe Soumillon are out on their own and heading for victory in the Criterium International
1 of 1
By Scott Burton 5:03PM, NOV 1 2016

Saeed Bin Suroor may have been more than 10,000 miles away in Melbourne overseeing his Cup contenders, but that will not have diminished either his or the Godolphin team's pleasure as Thunder Snow surged clear of his Criterium International rivals under Christophe Soumillon.

And those with ante-post vouchers for Churchill in the Qipco 2,000 Guineas will have been heartened by this Group 1 success, given Thunder Snow was fourth to him in the Dewhurst, while his nearest pursuer here, the Andrew Balding-trained South Seas, was back in sixth at Newmarket.

For Bin Suroor, the victory ensured 2016 would not be the first year in which he has not saddled a top-flight winner since starting training in 1995.

"I'm just so pleased for Saeed and the team," said Godolphin's managing director Hugh Anderson. "It's been difficult at one or two points in the season with the virus in the yard, and to come back like this will just raise everybody for the winter.

"Thunder Snow was fourth in the Dewhurst against some very good opposition and we always thought he was capable of a little bit better."

In a race in which the other Godolphin runner, the Charlie Appleby-trained Bay Of Poets, ensured a decent pace, Soumillon was able to sit a handy second, with Oisin Murphy never far away on South Seas in third.

While a couple of those left in the backwash suffered minor interference as Bay Of Poets dropped away, there was no fluke as Thunder Snow – a first Group 1 winner for his sire Helmet – powered to a five-length success.

"I know it's the middle of the night in Australia, but for Saeed this is a fantastic way for him to sign off the season," continued Anderson. 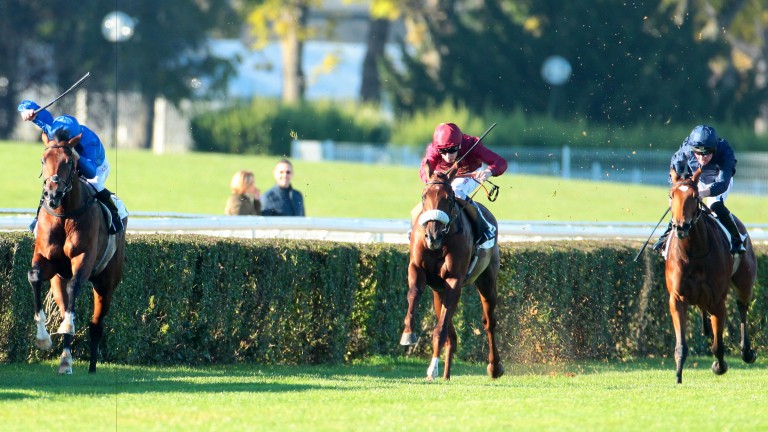 South Seas (centre) chases home Snow Thunder last season
"He's had quite a testing season and been put through everything that could be thrown at him, and for Thunder Snow to come through and win that authoritatively is absolutely fantastic."

Though finishing further behind the winner than at Newmarket, South Seas seemed more at home on this much flatter track.

"I think Newmarket was a very strong race, and the winner here was beaten there as well. We've got lots to look forward to."

Promise To Be True did not get the clearest of runs and it is hard to say whether she ran up to the level of her second behind Wuheida in the Prix Marcel Boussac over an extra furlong.

Trainer Aidan O'Brien said: "She ran very well. We took a bit of a risk dropping her back to seven and she looked at Chantilly like she wanted a mile.

"But we were just trying to divide up the fillies a little bit, so we sent some of them to America and let her take her chance here. She ran well and she'll be a lovely middle-distance filly next year."

FIRST PUBLISHED 5:54PM, OCT 30 2016
I know it's the middle of the night down in Australia but for Saeed, this is a fantastic way for him to sign off the season