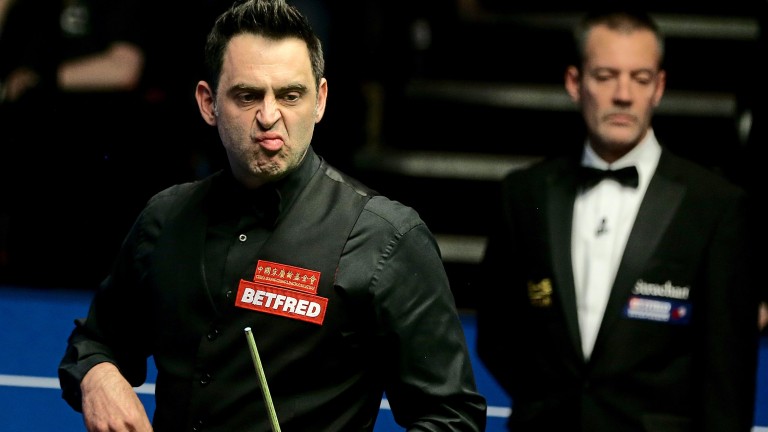 This is a difficult time of year for indoor types. The weather’s improving, the days are longer and people keep nagging you to go outside when you’d rather be at home watching the Betfred World Championship snooker.

The best-of-35-frames final sprawls over two days, culminating on bank holiday Monday, and the increased online coverage accompanying the BBC and Eurosport TV output sucks you into the snooker vortex.

The glory days of the 1980s still cast a long shadow over the world of snooker, particularly as so many legendary figures from that era have swapped the green baize for the BBC green room.

Yet the sport is perfectly suited to the digital age. While broadcasters on rolling-news channels are regularly drowned out by the noise of barrel-scraping, there’s no shortage of snooker content because the matches go on and on and on.

The record for the longest frame in professional snooker was broken in qualifying for this year’s World Championship as Fergal O’Brien edged out David Gilbert after two hours, three minutes and 41 seconds.

O’Brien’s victory must have been gripping viewing for fans of middle-aged men standing pensively next to snooker tables.

But it’s not all gruelling safety battles, lengthy debates with the match referee over some arcane piece of potting protocol, or mid-session toilet breaks.

The World Championship snooker also provides a rich harvest of bitesize highlights that are ideal fodder for Twitter and Facebook.

The BBC website’s snooker section captured my heart early in the tournament thanks to its headline: “Bottle makes Dott dangerous – Hawkins”.

Sadly, it turned out that Barry Hawkins was referring to Graeme Dott’s unflappable temperament rather than depicting his second-round opponent as a Begbie-style psychopath.

Video snippets are the bread and butter of the Beeb’s online snooker coverage. Their tempting array of archive footage and snappy updates from this year’s tournament must have condemned office workers to entire afternoons of procrastination during the past couple of weeks.

If you’re in a snooker frame of mind, it’s virtually impossible to resist clicking on a link to videos entitled “Liang’s great escape”, “What was Rory McLeod trying to do here?” or “O’Sullivan wins vital frame despite distraction”.

The phrase ‘trick shot’ is another vital weapon for any SEO-savvy snooker website. For sports fans, trick-shot videos are the equivalent of cat videos for whatever depraved online demographic is responsible for their disturbing popularity.

Search for ‘snooker trick shot Bristol’ to witness arguably the zenith of Western civilisation: an astonishingly intricate, MC Escher-inspired effort executed over a distance of 500ft in a west country sports bar earlier this year.

Inadvertent snooker brilliance also seems to be popular online. Over at Eurosport the sidebar of tournament highlights is full of extravagant flukes and mishit masterstrokes, as well as a video of a “sleeping fan” being ejected from an O’Sullivan match.

According to unconfirmed reports, the somnolent spectator only woke up to inquire: “Has Fergal O’Brien finished that bloody frame yet?”

Some old-timers may be suspicious of attempts to reduce a two-day, best-of-35-frames contest to a highlights package brief enough for Snapchat.

Fortunately, the live-scores tool on the World Snooker website allows traditionalists to follow the action at the glacial pace that God, or Ray Reardon, intended. It’s like the second coming of Ceefax – no frills, no frippery, just reams of data taking an irritatingly long time to load up.

The Crucible Theatre crowd plays an intriguing part in the drama (when they're not asleep, that is). By the quarter-final stage, the spectators resemble denizens of some windowless Las Vegas super-casino. They have no idea whether it is day or night outside – all they care about is how Kyren Wilson’s safety game is holding up against John Higgins.

But what happens at the Crucible once the snooker has finally finished?

Strangely, BBC presenter Hazel Irvine used exactly that phrase to sum up Neil Robertson's 13-11 defeat to Marco Fu in the second round.

The snooker professionals are a lively bunch on social media – just search for blokes with ‘147’ in their Twitter handle – and they don’t tend to shy away from confrontations with keyboard warriors.

Mark Allen (@pistol147) released a statement following his last-16 exit, suggesting that the critics questioning his commitment to the sport “need to get a life”. A career in the United Airlines public-relations department surely awaits.

A thick skin and a dark sense of humour are prerequisites for sportspeople in the social-media age. Last week, jockey Paddy Bradley received an abusive tweet about his ride on a beaten favourite at Ripon – despite the fact that poor Paddy was out of action at the time after breaking his wrist a couple of days earlier.

But every now and then the Twitter swamp is drained and some fragile yet lovely little creature crawls out of the slime, blinking in the unaccustomed sunlight.

So it was that this week, for the first (and hopefully last) time in my life, I found myself cooing aloud over a hashtag.

Pakistan’s cricketers are playing the West Indies in their final Test series before the retirements of captain Misbah-ul-Haq and veteran batsman Younis Khan.

With the perfect blend of punning and poignancy, the nation’s cricket fans – eager to pay their Twitter tributes to the mighty Misbah and Younis – have been signing off their tweets #MisYou.