Smyth: 'Stable Staff Awards win was a night I will never forget' 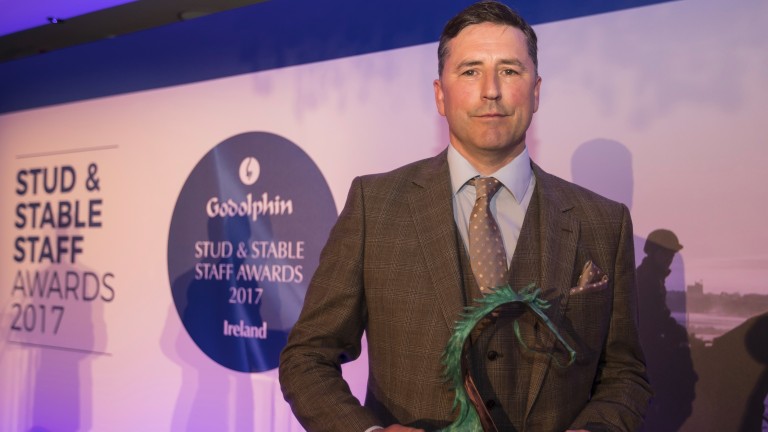 Smyth, who has been at Kildangan since 1988, also won the Leads by Example Award on the night.

In advance of the 2018 awards – nominations for which close on Monday, February 19 – he answered a number of questions about his role and what it meant to be honoured for his efforts in the industry.

What makes for good stable staff?
The one thing I’d say is you have to love it. You shouldn’t be in the job if it’s just a means to get money. To work with horses you need to enjoy what you’re doing. Every interview I ever went for, money was never a factor for me, it was always about me going for the job I wanted. It’s a fantastic sport with so many rewards, but it’s a demanding sport as well and you really need to love it.

How important are these awards?
They're hugely important. A jockey sits on a horse only on the day of a race and he enjoys the limelight if that horse wins a big race. But there are a huge number of people behind the scenes that have played their part in getting that one horse to the races and these awards help celebrate those people. That's what the Godolphin Stable Staff Awards are all about – they reward everybody in the industry, no matter how insignificant they may feel their part is, and they shine a light on the hard-working people in the sport.

What did it mean to win?
It was a night I will never forget. I know the amount of hard work that everybody puts in, not least my own colleagues, and the only thing that would top it would be to see them rewarded in the future as well. We all put in a hard shift and it’s a huge team effort.

What is the biggest challenge stable staff face?
The world has changed a lot since I started 35 years ago. People these days have car loans and mortgages, as well as families to support. You miss a lot when working in racing because you’re away so much. It’s a lifestyle that’s not for everybody, but you have to put your job first. For a lot of us it’s more of a vocation than a job and you must love what you do, otherwise it would be very hard. I think that’s why the Godolphin Awards are so special – they highlight all the sacrifices people make in racing.

If you could change one thing about your job, what would it be?
When I started, a stallion’s book used to be about 55 mares in a year, but now it’s about four times that. It puts a big demand on you when you’re looking after covering early in the morning and going back late at night. That can be tough, but there’s no real way around it. I don’t think I’d change anything and I'm happy with every decision I've made.

What is the best thing about your job?
I get to work with some of the best horses and people in the world and I have travelled to some fantastic places abroad with stallions and never once had to pay for a flight. If that’s not enough of a carrot to dangle in front of a young person who’s thinking about getting into the game, I don’t know what is. I always tell the younger people starting off to surround themselves with better horses as it will lead to better opportunities. One of the highlights of my time in racing was when I got to travel to Japan with Dancing Brave, who was covering mares out there, and I got to look after him. To be a part of that story was just a fantastic experience and I’ll never forget it. I've also worked closely with the likes of Cape Cross and, more recently, Teofilo. It’s pretty special when you go through catalogues and see the names of horses you once worked with. You're a part of history.

*Total cash prize fund is €84,000, with individual awards ranging from upwards of €500 for some of the runners-up, to €5,000 for various winners, while eight of the awards also include a cash prize to be shared between the respective winners' colleagues.

The winner of the Newcomer Award will also receive a five-day educational trip to Dubai with flights and accommodation included.