He's won an Oaks, now for the Derby!

While Wednesday's Nottinghamshire Oaks won by Wilamina might not feature on a list of Martyn Meade's career highlights, the trainer's Eminent is certainly on the list of punters shopping for alternatives to easy-to-back Investec Derby joint-favourites Cracksman and Cliffs Of Moher.

Permian – generally cut to 9-1 (from 10) – was also popular with punters on the eve of Derby declarations in what is an unusually wide-open year. A field of 18 could well be declared on Thursday morning.

Meade reports Eminent, like Cracksman a son of Frankel, in good shape for Saturday's £1.625 million Classic, saying of the 2,000 Guineas sixth: "He's bucking and kicking and squealing, and ready for action on Saturday. He's looking good and I'm very pleased with him.

"It looks sure to be a big field now, but so long as he doesn't meet traffic problems that shouldn't be a problem. I think he'll just be taking it easy coming down the hill, and I'm hoping it will be in the straight that he does most of his best work.

"We want him to be able to use his stride, so we just don't want them going too slow and for him to get boxed in. But that's racing and we can't do much about it."

Asked about the support for Eminent and Permian, Rupert Adams of Hills said: "They've been two of the best backed horses in the last seven to ten days and have helped balance our ante-post book.

"That now looks in better shape and has meant we've been able to knock out Cracksman who, while still a loser, is not as bad a result as he looked a few weeks ago."

"Permian has been the subject of very positive quotes from trainer Mark Johnston, which may have added to his popularity."

Betway spokesman Alan Alger said: "Support today for Frankel colt Eminent was more than steady, with trainer Martyn Meade gushing about how well the horse seemed to handle the track after his run-out at Breakfast With The Stars last week.

"Meade believes the mile trip was a bit too sharp for Eminent at Newmarket, and punters seemed to have latched on to his confidence about the horse’s ability to stay the extra half-mile."

Alger added: "Mark Johnston is also bullish about Permian, believing his colt will enjoy the step up in trip more than Cracksman after their duel on the same course in April." 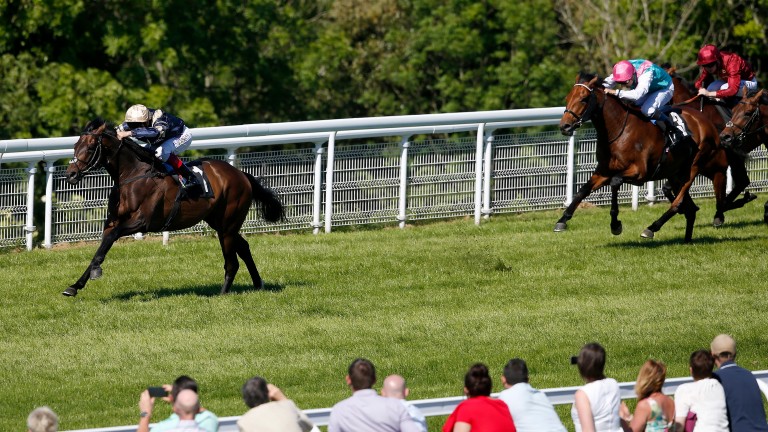 Khalidi, pictured winning Goodwood's Cocked Hat Stakes in style, will be partnered by Pat Smullen in the Derby as the rider bids to follow up last year's victory on Harzand
Alan Crowhurst

Pat Smullen comes in for the mount on Khalidi – like Permian, supplemented for £85,000 – while Silvestre de Sousa partners Pealer, Andrea Atzeni is on Crowned Eagle and James Doyle rides Glencadam Glory. Frankie Dettori is aboard Cracksman.

Smullen won last year's Derby on Harzand and, with Khalidi, has an extremely rare ride for Gosden, the rider remembering only a second on Furia Cruzada in the Duke of Cambridge Stakes at Royal Ascot in 2016 when asked if he had ridden for the trainer before.

Khalidi ran only last Friday, winning the Cocked Hat at Goodwood, and his big-race rider said: "Khalidi is obviously in very good form after winning easily and in track record time.

"It looks a very open race and he's a good ride to get. I'm looking forward to it."

The ground at Epsom on Thursday dried from good, good to soft in places to good, and selective watering of the back straight, bottom of the hill and first furlong of the five-furlong track took place. Rain remains possible on Friday night.

FIRST PUBLISHED 8:26AM, MAY 31 2017
It looks an open year and worth taking a shot. It’s about whatever steps up on the day