At The Races extends live deal with Breeders' Cup 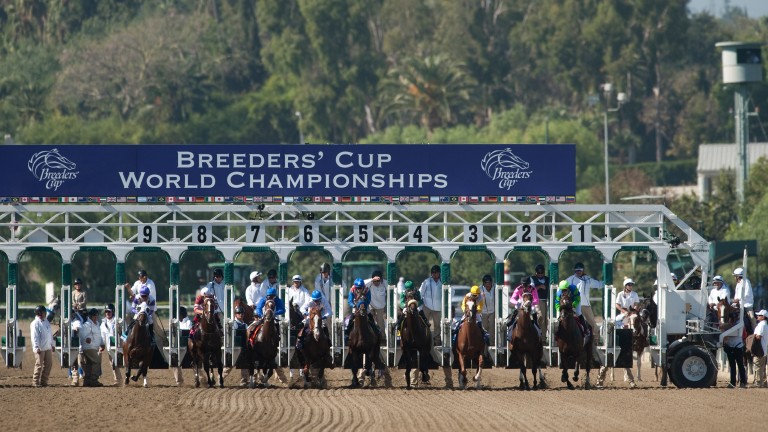 Breeders' Cup: will be shown exclusively live on ATR in Britain and Ireland
Edward Whitaker
1 of 1
UPDATED 10:33AM, MAY 10 2018

At The Races will broadcast the 2018 Breeders’ Cup exclusively live in the UK and Ireland.

In addition, Sky Sports Racing will broadcast the 2019 and 2020 events exclusively live following the launch of the new dedicated racing channel, as the successor to ATR, in January 2019.

The event will be staged this year at Churchill Downs on November 2 and 3.

ATR chief executive Matthew Imi said: “We’re delighted to have extended our long-term relationship with the Breeders’ Cup for another three years.

"The event speaks for itself in terms of its profile and position within racing on the global stage. We’re also excited about how we can help tell the story on Sky Sports Racing and leverage the considerable might of Sky Sports, Sky Sports News and Sky Sports’ digital platforms in terms of further support.”

Craig Fravel, president and chief executive of Breeders’ Cup Limited, added: “ATR has provided excellent coverage of the Breeders’ Cup for many years and we are very pleased to extend our partnership.

"The UK and Ireland are important markets for us, particularly with our recent addition of four Royal Ascot races to the 'win and you’re in' challenge series, so we are excited about the opportunities ahead with Sky Sports and Sky Sports Racing.”

Ripon is preparing to host its free Friday evening fixture for the third consecutive year, with the event to be sponsored by blacktype.bet.

Introduced in 2016 as part of an initiative to encourage first-time racegoers, Ripon is offering free entry into its Paddock and Course enclosures this Friday.

Managing director James Hutchinson said: “Feedback from visitors in the first two years of the initiative has proved highly positive, in particular from those experiencing racing for the first time and that encouraged us to bring back Free Friday for a third year.

“We are really pleased to be working with blacktype.bet as sponsors of the event and we are very much looking forward to delivering another fantastic fun evening of racing and music.”

Free entry to Paddock and Course Enclosures, or discounted entry to the Club Enclosure, can be reserved online by clicking here.

The 7bets4free.com Fixed Brush Hurdle Series kicks off at Worcester on Thursday.

The series, across Worcester and sister track Southwell, comprises 42 qualifying races and a £30,000 final at Worcester on October 24. All races will be run at Classes 4 and 5, except for the £30,000 final, which is a Class 2.

For 2018 prize-money for the final has been boosted by £5,000 and horses will need to finish in the first six in a qualifier to be eligible for the final, as opposed to the first eight, like in the inaugural year.

The series aims to provide new opportunities for as many horses as possible at the grassroots of the sport.

"Both racecourses offer important opportunities for horses at the grassroots of the sport and the series is a valuable element of this by allowing the opportunity to qualify for the £30,000 final in October.”

Trainer Ian Williams, who won the final last season, said: “We were delighted to take home the big prize last year with Psychedelic Rock and look forward to targeting it again. This is a great series for summer racing.”

The two races over seven furlongs due to be run at Salisbury's next fixture a week on Thursday have been cancelled. This is due to the seven-furlong start remaining unraceable.

Two replacement races at other distances will be programmed in their place, along with another race, making a seven-race card.

Details of the three races are available via www2.racingadmin.co.uk, with entries closing for the fixture at 12 noon this Friday.

Jeremy Martin, clerk of the course at Salisbury, said: "The ground in front of the seven-furlong start is recovering well with the two bare patches that had been waterlogged now improving and starting to grow over, however it will not be raceable for May 17.

"It is anticipated that the start will be used at the fixture on Tuesday, June 12, which is when the seven-furlong start is next scheduled to be in use."

Keelan Baker on road to recovery

Apprentice Keelan Baker, who injured his right leg in a fall at Wolverhampton in February, hopes he might be back in action by the end of the month.

Baker suffered injuries that might have been life threatening, or certainly life changing, when unseated from Let Me In turning out of the back straight.

All is well now though, following several operations and regular trips to Oaksey House, and the 18-year-old is back riding out for his boss Mick Appleby.

Baker said on Tuesday: "I'm doing fine now, and I've been riding out at Mick's now for three or four weeks. I hope to see about getting my licence back in the next week or two, in which case I could be riding again by the end of May or the beginning of June."

He added: "I'm feeling really good now – better than ever – but I had three lots of surgery within six days at the hospital in Wolverhampton for what they call compartment syndrome.

"My leg swelled up under pressure and it took three operations to get the pressure down, but it's looking much better now and I'm looking forward to getting back on the racecourse."

One of the UK’s leading gin brands has teamed up with Musselburgh in a three-year sponsorship deal.

The £100,000 Edinburgh Gin Scottish Sprint Cup will be the feature race at the track on Saturday, June 9.

The deal will see Edinburgh Gin poured in all racecourse bars, restaurants and pop-up bars, and the track will introduce the new premium gin, named Seaside Gin.

Musselburgh general manager Bill Farnsworth said: “Edinburgh Gin is a dynamic high-end brand and its sponsorship of our most dynamic raceday is a great fit for both parties. We are delighted to raise our glasses to this exciting three-year sponsorship deal with a premium gin brand.”

A memorial service for Classic-winning breeder Lennie Peacock will take place on Tuesday, May 15, beginning at 2.30pm at the Church of St Mary and St Alkelda, Middleham.

FIRST PUBLISHED 10:33AM, MAY 10 2018
ATR has provided excellent coverage of the Breeders’ Cup for many years and we are very pleased to extend our partnership