Slick and clever Thistlecrack can dispel any lingering doubts 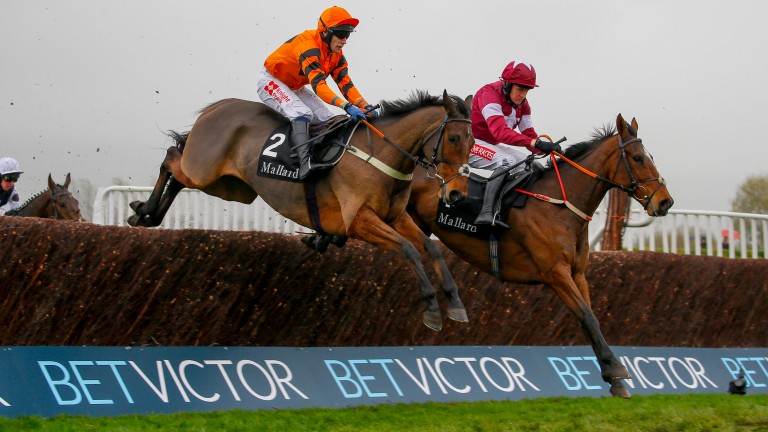 Thistlecrack and Tom Scudamore (nearside) in action over the Cheltenham fences
Mark Cranham
1 of 1
By Graham Dench 7:36PM, NOV 25 2016

Tom Scudamore believes that criticism of Gold Cup favourite Thistlecrack's technique at Cheltenham a fortnight ago was out of all proportion and he has no qualms about the eight-year-old's jumping as he lines up in Saturday's bet365-sponsored Grade 2 bidding for a third chase win from three starts.

Scudamore, who partnered Thistlecrack in a successful first schooling session on grass last Saturday, said: "I think people have gone overboard in criticising his jumping at Cheltenham. He made one mistake really. It was only his second run over fences, and he stood off the first ditch a bit far and landed on top. But then at the second ditch he stood off again, yet got as far out the other side. He made his mistake and learned from it, and certainly on the second circuit he was foot perfect.

"Other than the one mistake I think you would be hard pushed to crab him at Cheltenham. I think that it was just that he was so fluent at Chepstow, and with the reputation he has expectations of him are so high and everybody expects him to have wings straight away. But he's learning, and he's a fast learner. In 30-odd fences in public he's made one mistake, and I'd take that. I wasn't in any way worried or concerned."

Scudamore, who added that Thistlecrack was "slick and clever and ticked all of the boxes" when schooling upsides Hennessy Gold Cup favourite Native River over eight fences at trainer Colin Tizzard's last weekend, said Thistlecrack's position at the head of the Timico Cheltenham Gold Cup betting will not be on his mind in the slightest on Saturday.

"To me the fact he's Gold Cup favourite is an irrelevance," he said. "I'm taking it race by race and all I'm concentrating upon is winning this Grade 2 round Newbury. Journalists have articles to write, and bookmakers' PR men have their jobs to do too. That's the way of the world, but it's an irrelevance to me.

"I just want him to go out and build on those first two runs, and get more experience under his belt. Newbury is a great track, for novices and handicappers alike, and it's just another part of his education."

Ibis to need the run

Trainer Paul Nicholls is not expecting any fireworks from his Martin Pipe Hurdle winner and said: "Ibis Du Rheu always needs a run but he has to start somewhere. Thistlecrack will be hard to beat but this will improve him for targets down the line."

Bigbadjohn had only one opponent when winning at Newbury but is held in the highest regard by trainer Rebecca Curtis and jockey Jonathan Moore, who see him as a Hennessy type in 12 months' time.

FIRST PUBLISHED 6:00PM, NOV 25 2016
With the reputation he has expectations of him are so high that everybody expects him to have wings straight away, but he's learning, and he's a fast learner