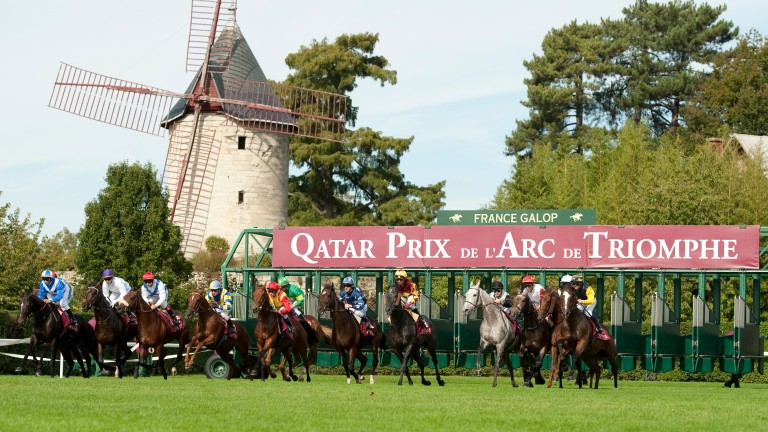 The action from Longchamp will be shown on Sky Sports Racing next year
Edward Whitaker (racingpost.com/photos)
1 of 1
By Scott Burton UPDATED 7:11PM, SEP 26 2018

Sky Sports Racing will be the exclusive pay TV broadcast home of French racing in Britain and Ireland for three years from January 1, At The Races and the PMU announced on Wednesday.

As part of the deal – revealed by Lee Mottershead in his Monday column in the Racing Post – ATR will be the PMU’s online video streaming provider in Britain and Ireland as the PMU launches a full daily service of more than 10,000 live French thoroughbred and trotting races to British and Irish online betting markets.

Lee Mottershead: a brief foray in the commentary box highlights the talent of the professionals

ATR chief executive Matthew Imi said: "This is a very exciting new partnership for us with France Galop, Le Trot and PMU and one that has immense potential.

"French racing is already well supported by owners and trainers in the UK and Ireland but we will showcase the strength and quality of French thoroughbred racing throughout the year in a way that has never been done before by UK racing media."

Confirmation of the exclusive deal with Sky Racing comes as the PMU also revealed details of its relatively new partnership with William Hill and Paddy Power Betfair, which began in February this year and which the French authorities hope will expand under the new rights arrangements.

The former monopoly operator has been supplying the two companies with enhanced data feeds in order to allow them to react to movements in the domestic pools as well as their own turnover on French racing.

"We provide the images and data adapted to the needs of the market, which enables our partners to make adjustments to their odds and to offer French racing daily to their betting shop and digital customers," said the PMU’s international director Aymeric Verlet.

The PMU describes results from the first six months of the partnerships with the two companies as being "at the high end of our expectations", and sees scope for further progress in the future once the Sky Racing deal takes effect, with the ambition to work with more British and Irish-based firms.

Verlet said: "Every year more than 200 racing and trotting meetings will be shown live, including all of the most prestigious races in their entirety.

"The technology highlights the different bets and odds offered by the local operators, interviews with racing professionals and with bookmakers at a time that will help punters to make their choice."