Three jockeys walk away after pile-up in last race 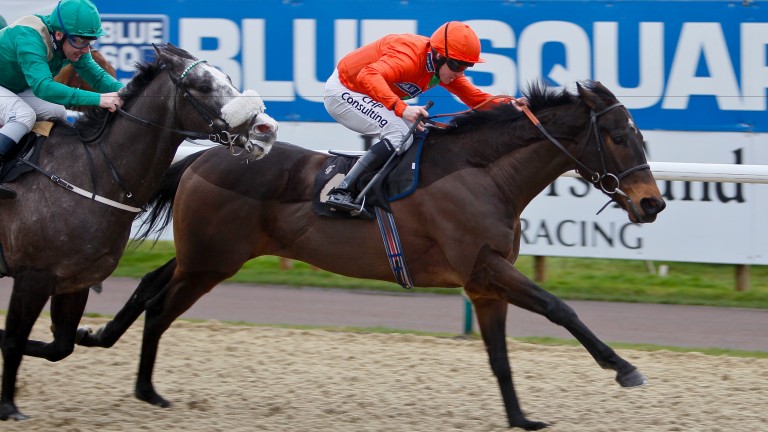 Haaf A Sixpence: in past winning form at Lingfield where he won again on Friday
Mark Cranham
1 of 1
By Bruce Jackson 5:14PM, NOV 12 2016

Three jockeys were involved in a pile-up in the final race at Lingfield on Friday but George Downing, Toby Eley and Ed Greatrex were able to walk away from the fall.

Coming just 12 days after the incident at Kempton which left Freddy Tylicki with a T7 paralysis and jockeys Jim Crowley and Ted Durcan with broken bones, the three riders were thrown to floor in the closing stages of the 1m4f apprentice handicap.

George Downing’s mount Bamako Du Chatelet appeared to clip heels with Trending, bringing him down with Toby Eley on Diletta Tommasa and Ed Greatrex on Salient colliding with the fallen horse.

All jockeys and horses were up soon after the incident, with the riders taken for inspection by the doctor. The owners of winner Courtsider donated their prize-money to the Injured Jockeys Fund.

Stipendiary steward Chris Rutter said: “We inquired into the falls and it appeared David Parkes on Trending had moved marginally left when George Downing was going for a gap and clipped his heels and his horse brought down Diletta Tommasa and Salient behind.

“Toby Eley, rider of Diletta Tommasa, was able to give evidence at the inquiry but both Downing and Greatrex were being examined by medical staff.”

The young and the old is often the storyline of the all-weather, with apprentices getting their chance to star and some old equine favourites heading out in the cold, and it was seven-year-old Haaf A Sixpence who was the star on a day when youth dominated the winner's enclosure.

The winner of the competitive Newbury Spring Cup three and a half years ago turned back the clock with the help of 3lb claimer Hector Crouch to defy top weight in a division of the mile handicap.

He could have been a prime example of this week's BHA move to allow horses to be entered for handicaps a pound or two above the rating ceiling as he is due to go up 1lb after a good second last week.

"There wasn't another race for him in a month so it wasn't a case of running him before his new rating," said winning trainer Ralph Beckett.

Owner breeders Melody Racing were out in force to greet their winner, who has won every year bar 2014 when he missed the majority of the season.

"He's a lovely old boy and is a great ride for apprentices," added Beckett. "Not many win eight races and he is tremendously versatile and sure to pay his way over the winter."

George Wood will be the envy of many of his weighing room colleagues as he is ready to swap freezing Britain for the idyllic setting of Santa Anita in sunny California next month after riding another double.

The first was for one of his biggest fans in Kindly's co-owner Zara Johnstone, who recalled: "He looked after a filly of ours at James Fanshawe's and rode her round Kempton one day sadly without success.

"He has come a long way and hopefully will ride more winners for us."

Wood showed his skills to complete his double on short-priced favourite Indulged in the 1m2f fillies handicap – staying cool after the game plan went out of the window after a slow start by the James Fanshawe-trained winner.

Former Fanshawe assistant Charlie Fellowes can reflect on another personal best in his third season since taking out a licence.

"I set a target of 20 winners after 14 last year and that is 25 now," said the Newmarket trainer after Carolinae got a dream run up the inside rail under Stevie Donohoe to win the other division of the mile handicap.

Fellowes is looking for a last hurrah with the filly in a Listed race in France before she goes to the mares sale next month.

Josephine Gordon moved one victory away from riding out her claim in teeing up a double, completed by newcomer Team Meeting in the 5f maiden, for Godolphin on Hersigh in the 7f nursery.

"I seem to be taking longer than I wanted as I had hoped to ride the last two winners to lose my claim by last week," said Gordon before dashing off to Wolverhampton with a trip to Barbados for a jockeys' challenge next week.

Godolphin may only be targeting all-weather championship finals day but have a few choice two-year-olds to give experience to this month before the winter break in Dubai.