Cheltenham reaction UNDER THE RADAR

Ones for the notebook: six festival eyecatchers who can make amends

Ballyandy clearly failed to meet expectations when finishing fourth in the Supreme Novices' Hurdle but there were mitigating circumstances for the below-par performance. Sam Twiston-Davies found himself short of room after jumping the second flight but things got even tighter on the turn away from the stands, when the rider was perched up Ballyandy's neck after he appeared to clip heels. Pulled to the outside, it is to Ballyandy's credit that he made headway into a challenging position on the approach to the third-last, despite suffering such a troubled passage.

He was unable to quicken when the sedate pace lifted on the run down the hill to the second-last, but kept on in pleasing style and will be seen to better effect given a stronger gallop and more luck in running.

It would be pushing it to say that Last Goodbye was an unlucky loser of the novice handicap chase as Tully East, Gold Present and Two Taffs pulled nicely clear of the field in the style of extremely well-handicapped horses. However, Last Goodbye would certainly have finished a good deal closer to the principals had he not been stopped in his tracks by the fall of Killiney Court at the second-last, just as the pace was starting to lift. Last Goodbye did well to avoid coming down in that incident, and then showed himself to be on a lenient mark by storming up the hill to grab a never-threatening fifth.

Still unexposed as a chaser, with just four starts over fences to his name, Last Goodbye retains the potential to do much better and is always likely to offer a spot of value given his highly capable but unfashionable connections.

Stop the Neptune on the run to the second-last and you'd be forgiven for thinking you had gone back ten years in time as a horse fitted with a sheepskin noseband and carrying the silks made famous by Harchibald came swinging on the bridle, seemingly with plenty to give. Unfortunately for owner Des Sharkey, Brelade's finishing effort was reminiscent of Harchibald's as his effort petered out up the hill and he could finish only sixth. The result does not do justice to the overall performance, however, and the powerful manner in which Brelade travelled suggests he could be a potent force this spring on good ground, particularly if Gordon Elliott chooses to exploit a potentially lenient handicap mark of 142. 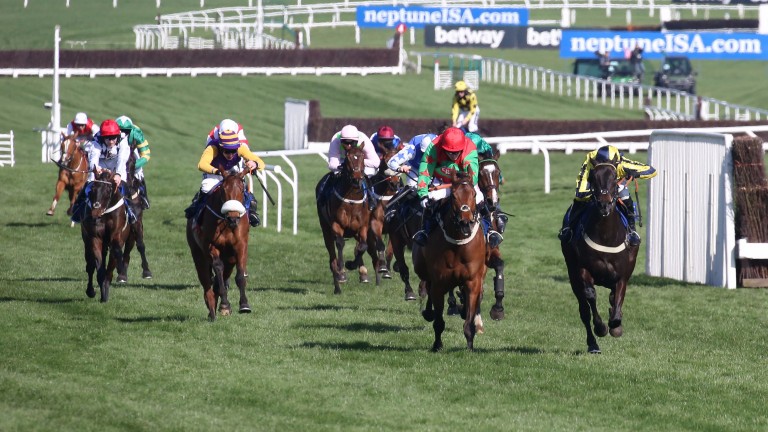 A trouble-free run should never be taken for granted in a 25-runner cavalry charge like the Coral Cup, but connections of both Scoir Mear and Mister Miyagi can still rue their luck about suffering such rough passages. Scoir Mear looked on a handy mark based on his rock-solid Irish form and his astonishing burst up the hill to grab fifth having repeatedly been denied a run identifies him as a horse capable of climbing further up the handicap ladder. It is a concern how weakly Mister Miyagi finished, but he travelled powerfully for much of the race and was looking a threat before being hampered on the run to the second-last, at which point his chance in effect ended. It is worth noting Mister Miyagi had finished marginally ahead of the winner Supasundae when they were sixth and seventh respectively in last year's red-hot renewal of the Supreme Novices' Hurdle, and he is a well-handicapped horse granted better luck. 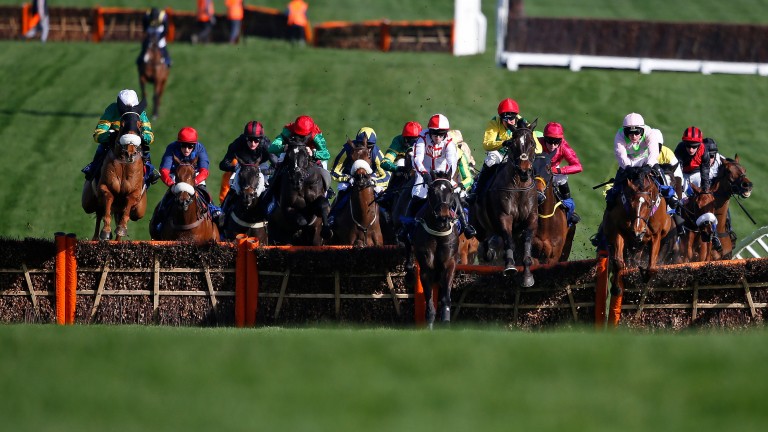 Verdana Blue's fourth behind Let's Dance was a career-best effort based on the bare form. But when you consider that Nicky Henderson's mare sat closer to the overly-stronger pace than the other principals –and pressed for home sooner – her effort can be upgraded further still. A winner of both previous completed starts over hurdles, Verdana Blue remains open to improvement and her versatility in terms of distance, allied with her novice status, gives connections plenty of options for the remainder of the season.

FIRST PUBLISHED 8:00AM, MAR 22 2017
A horse fitted with a sheepskin noseband and carrying the silks made famous by Harchibald came swinging on the bridle, seemingly with plenty to give

Next stop Coolmore as dual-purpose star Verdana Blue is retired