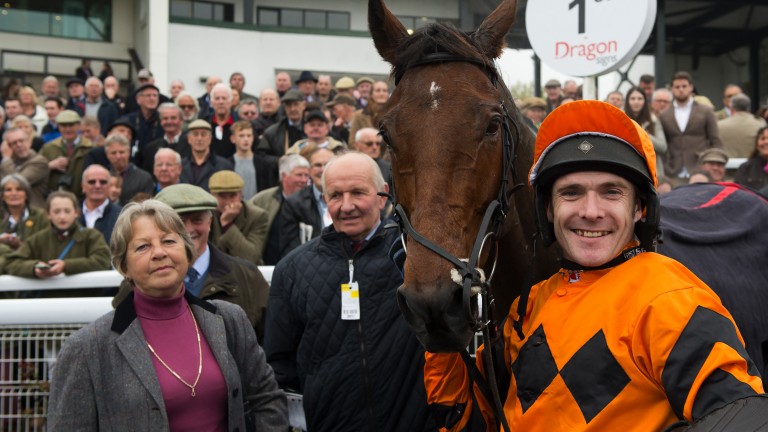 Thistlecrack: could thrill racegoers in the 3m novice chase on Saturday
Edward Whitaker
1 of 1
9:49PM, NOV 7 2016

The Flat season is well and truly finished and the Open meeting is just around the corner. We pick out six superstars that could be in action at Cheltenham this weekend as the jumps season starts in earnest.

Last season's Champion Bumper winner was last month nominated by Nigel Twiston-Davies as one of the two horses his trainer is most excited about this season and he looks likely to be in action over the weekend with two entries.

If he runs on the Friday, in a Grade 2 over 2m5f, he could face stablemate Wholestone, Nicky Henderson's Baden and Thistlecrack's half brother West Approach. If he waits for the 2m Grade 2 on the Sunday we could see a rematch with his Perth conqueror, and 2015 Champion Bumper winner, Moon Racer and Thomas Campbell, an impressive winner from subsequent Sandown scorer Khezerabad at last month's Showcase meeting.

Also a winner at last month's Showcase meeting was second-season chaser Fox Norton, who made ultra-light work of his handicap debut with an 11-length win off a mark of 146 for Neil Mulholland.

He has since been bought by Ann and Alan Potts and moved to Colin Tizzard, but Mulholland pinpointed the Grade 2 Shloer Chase as his next target and new connections are sticking to that plan.

With the likes of the returning Module, the fragile Simonsig and tearaway Special Tiara all among the entries it could prove a very early indicator of whether it was money well spent.

Unbeaten, check. Big-name trainer, check. World-famous owner, check. It's easy to see why JP McManus's Winter Escape is favourite for the Greatwood. Despite having raced just three times, twice when odds-on in fields of eight or smaller, he is already a Grade 2 winner thanks to his victory in the Dovecote and his trainer Alan King has a wonderful record with talented young hurdlers.

After that Dovecote success King described him as "potentially very, very exciting," and the form has worked out well, with runner-up Marracudja a winner of both his starts over fences this season (he has achieved an RPR of 150), while the third, Welsh Shadow, was second in the Welsh Champion Hurdle off a mark of 140.

The first incarnation of the BetVictor Gold Cup has the potential to be a cracker with exciting Grade 2-winning novice Frodon taking on proven performers such as Top Gamble, Ballynagour and Taquin Du Seuil, last year's one-two Annacotty and Buywise, and a whole host of talented individuals.

But no horse is as exciting, or possesses as much potential, as Jonjo O'Neill's More Of That. The 2014 World Hurdle winner remains the only horse to have beaten Champion Hurdler Annie Power when she's stood up and a light novice chasing campaign, in which two facile victories were followed by a third in the RSA Chase when bursting blood vessels in each nostril, means he could line up here off a mark of 154.

His trainer has already labelled him a "certainty" and he is a best-priced 33-1 for the Gold Cup. Frodon (66-1) and Vintage Vinnie (100-1) are the only others in this deemed worthy of pricing up for the festival's blue-ribboned event.

Cliffs Of Dover was another to win at the Showcase meeting, one of five wins in six starts since he started hurdling towards the end of August for champion trainer Paul Nicholls.

He has thrived on his racing, would have been thrown into the cauldron of the Greatwood if he wasn't too young and so instead targets the Grade 2 JCB Triumph Trial in which he faces a whole host of unexposed types from big yards. They could be anything, but they'll have to be very good to beat Cliffs Of Dover.

The Gold Cup favourite could make his second appearance over fences in the 3m novice chase on the Saturday. If he does it is unlikely many, if any, of the 16 other entries – including the likes of his World Hurdle victim Alpha Des Obeaux, Champers On Ice, Master Dee and O O Seven – will turn up.

That could be good news for the 2m4f novice chase on the Friday, which features all of those same horses as well as the likes of Rock The Kasbah, Aux Ptits Soins and Barters Hill, but it will be even better news for racing fans as it will afford them with another opportunity to see the all-conquering superstar in full flight.

11 of his 16 potential opponents finished first or second last time out, including Aqalim who chased him home on his chasing debut at Chepstow, so he could well face a slightly stiffer test on Saturday. But given he is more than half the price of the likes of Gold Cup winners Coneygree and Don Cossack for this season's renewal, there should be very little that can trouble him here.

FIRST PUBLISHED 5:47PM, NOV 7 2016
No horse is as exciting, or possesses as much potential, as Jonjo O'Neill's More Of That