Talk of the Tracks ASCOT

Sire shows he is not done with yet with vintage victory 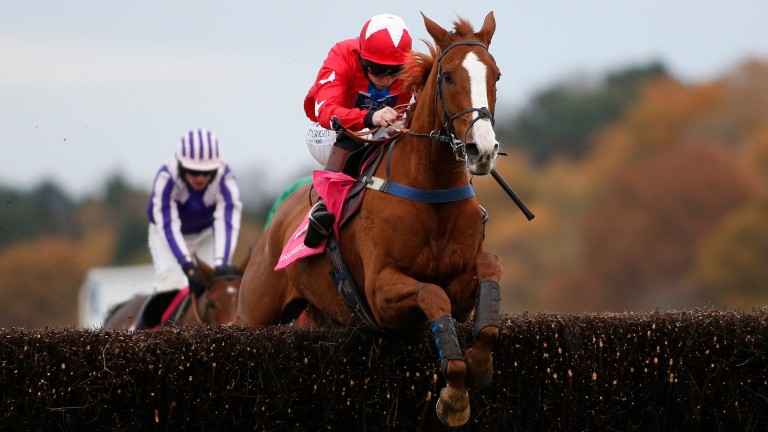 Gary Moore had to reach for a bucket of cold water to clean the bleeding off the hind leg of Sire De Grugy, but nothing could dowse the warmth that broke out across Ascot after a vintage return to form for the former Champion Chase winner.

Recent runs, including a defeat at Aintree 27 days earlier, had provoked the notion that the five-time Grade 1 winner was not the force of old, but on this evidence he remains one of the best in his sphere making light of 11st 12lb to take the £100,000 Shawbrook Handicap Chase.

Once he was sent on by Jamie Moore with three to jump the outcome was never in doubt, even though Quite By Chance had closed the advantage to a length and a half at the line.

"I was pleased with his first run at Liverpool," said Moore. "He ran bad first time out last year after having two racecourse gallops. He hasn't had any racecourse gallops this year and hardly schooled on grass because the ground was so firm so was going their half-cocked. He also didn't stay.

"His homework had been good and this was the obvious place to come. He could have gone for the Shloer, but he is a better horse here than he is at Cheltenham."

A return to the Tingle Creek Chase, which Sire De Grugy won a year ago and where he would meet stablemate Ar Mad, could be next on the agenda provided he recovers.

"He has a cut and he's not an easy horse to deal with," Moore added. "When he gets shod he has to be sedated. I hope that drop of cold water does him good.

"There was no point waiting for the Tingle Creek when there was proper prize-money on offer here. He will go to the Tingle Creek as long as he comes out of this okay, but it wouldn't be the end of the world if he came back here for the Clarence House."

The last time Royal Regatta tackled Graded company at Ascot he gave Silviniaco Conti a race up to the second-last and, without such an illustrious opponent to take on here, he found the Grade 2 Stella Artois 1965 Chase more plain-sailing.

In front from the outset he had been driven into a three-length lead after the last but his advantage was cut right back by the rallying Kylemore Lough, who was only a head behind the Philip Hobbs-trained winner at the finish.

Hobbs's wife Sarah said: "It was catch me if you can, Tom [O'Brien] said, and Tom is a Saturday rider at the moment. He much prefers going this way round. Everything was right for him today, the ground, and Tom was super on him. He really rode him with conviction which he needs because he is a little bit soft."

The winner got further than Dodging Bullets, whose connections were none the wiser about the 2015 Queen Mother Champion Chase winner's capabilities over this longer 2m5f trip as he was pulled up before the tenth fence.

Trainer Paul Nicholls's assistant Harry Derham said: "He got very worked up before the race. It was like Dodge as a four-year-old not an eight-year-old and Nick [Scholfield] said at no stage was he happy. We have checked his heart and he's fine."

Such is the strength of Nicky Henderson's team of novice chasers that he was already looking long term, and at the type of prize that continually eludes him, with Beware The Bear after he made a winning debut over fences under Jerry McGrath.

"Jerry said he is going to win the Welsh Grand National," said Henderson. "I said I don't like the race, but we have decided we are going to win it in three years time. He does go in the soft. One day we might win a Grand National of some description."

While stable stalwart Cue Card was winning the Betfair Chase again for Colin Tizzard, the stable also have an eye on their future stars of which Elegant Escape could be one after winning his second novice hurdle.

"We are going to be sensible with him," said Joe Tizzard. "There are no massive plans, but he is earning his right to go in the better races. We are very aware he is a big raw baby and we want him over fences in a couple of years time."

Even with two Grade 2 races on the card, the clear crowd-pleaser was the £100,000 2m1f handicap chase, the richest race of its kind in the jumps calendar.

FIRST PUBLISHED 5:59PM, NOV 19 2016
There was no point waiting for the Tingle Creek when there was proper prize-money on offer here. He will go to the Tingle Creek as long as he comes out of this okay but it wouldn't be the end of the world if he came back here for the Clarence House.