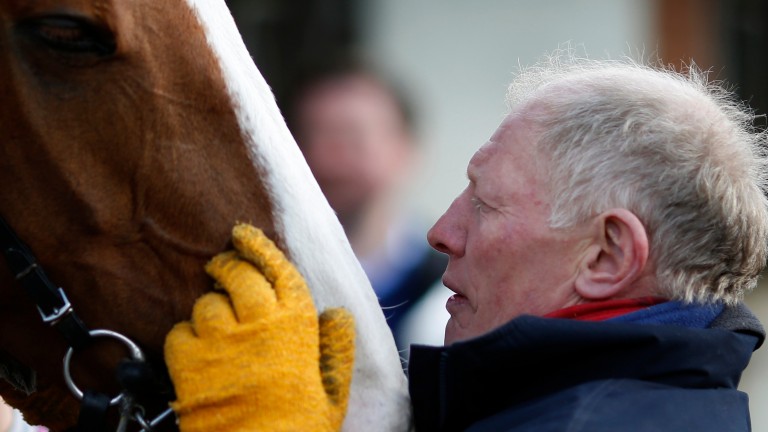 Gary Moore reports Sire De Grugy none the worse for his mishap in the Desert Orchid Chase at Kempton
Alan Crowhurst
1 of 1
By Jon Lees 3:33PM, DEC 28 2016

Sire De Grugy was yesterday none the worse for Tuesday's unexpected mishap in which he parted company with jockey Jamie Moore at the second fence of the Desert Orchid Chase at Kempton.

The former Champion Chase winner completed the race on his own as Special Tiara held off Sir Valentino to win the Grade 2 race for a second time.

Trainer Gary Moore said: "He's absolutely fine. He ate up all his food and trotted up sound this morning. It was one of those things. He got a bit low and went left at the same time and then they parted company. It was totally out of character.

"The way the race turned out I think he probably would have given them something to do, but his exit made life easier for them."

Moore said Sire De Grugy could now head to Ascot next month for the Clarence House Chase, a race he is also earmarking for Ar Mad.

'He couldn't be saved'

Philip Hobbs could give leading JCB Triumph Hurdle hope Defi Du Seuil one more start before the Cheltenham Festival after he recorded a fourth win at Chepstow on a mixed day for the the stable.

Later on the card the stable lost Onenightinvienna after he was pulled up in the Welsh National. The seven-year-old, who raced in the West Tip colours of the Luff family, contested the Grand National last season as a novice and was one of the leading hopes for the Chepstow but was dismounted after six fences.

Hobbs said: "It's very sad. Onenightinviewnna struck into his tendon badly on his off fore and he couldn't be saved. He was a young horse as well."

Of Finale Hurdle winner Defi Du Seuil, he said: "He could have jumped better up the straight. His jumping is normally good but it was the first time he had been in front like that so we are putting it down to being in front too long. He is fine this morning. 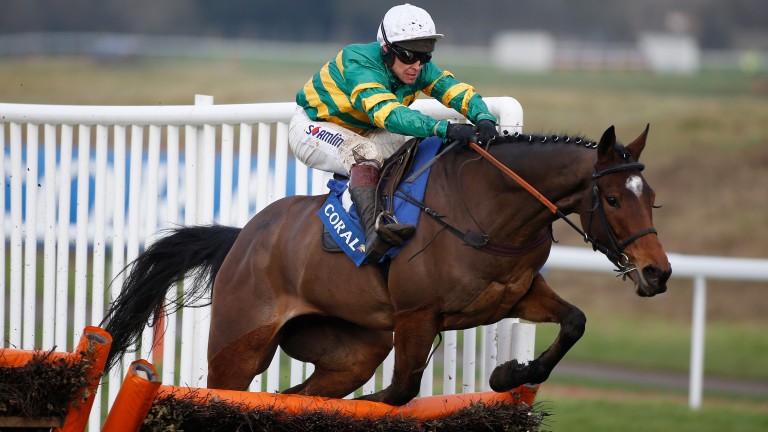 Defi Du Seuil, pictured on the way to victory in the Finale Juvenile Hurdle at Chepstow, could have one more outing before the Triumph Hurdle
Alan Crowhurst
"The Triumph Hurdle is the main aim and we will work back from that. The obvious race to go for if he was to run again is the Triumph Hurdle Trial at Cheltenham on January 28 where he gets a 7lb penalty."

Two-time Welsh National winner Mountainous was also pulled up, unable to get competitive on ground that wasn't testing enough for him.

Trainer Kerry Lee, who also saddled Bishops Road to finish tenth under 11st 11lb, said: "It was horrible ground. For Native River to carry top weight in that ground was an absolutely magnificent performance. I think he is now my favourite for the Gold Cup. I think he'll win it on that evidence.

"I'm never running Mountainous on anything other than heavy ground again. He just couldn't go fast enough on that ground. I'm not sorry we tried, though, and we all had a great day out.

"Bishops Road will go for either the Irish Gold Cup, the Denman Chase or possibly the Grand National Trial, which he won last year. I was very happy with the way Bishops Road ran. He was carrying an awful lot of weight."

Meanwhile, Josies Orders, winner of the Cross-Country Chase at the Cheltenham Festival last season and favourite for the race next year, has been ruled out for the rest of the campaign.

Frank Berry, racing manager to the eight-year-old’s owner JP McManus, revealed: “Unfortunately Josies Orders has met with a setback and won’t be running again this season.”

FIRST PUBLISHED 3:20PM, DEC 28 2016
The way the race turned out I think he probably would have given them something to do, but his exit made life easier for them