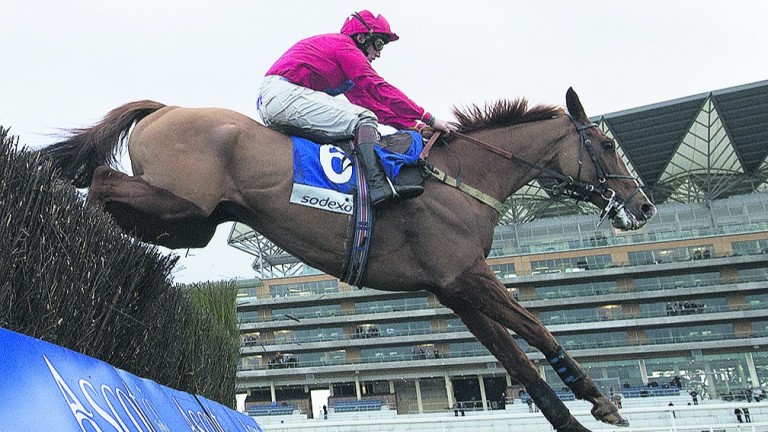 Sire De Grugy has enjoyed days out at Ascot in the past and returns today
Edward Whitaker
1 of 1
By Mark Scully 6:00PM, NOV 18 2016

Dresden put up a fine performance to win this valuable contest 12 months ago but he will have to perform to a significantly higher level if he is to repeat the trick this time.

While not a weak race last year, it is hard to argue there was anything of the class of Vaniteux in opposition and certainly not of the calibre of Sire De Grugy.

Gary Moore's 2014 Champion Chase winner heads to Ascot in a bid to put a flat reappearance at Aintree behind him on ground that should better suit as he bids to build towards a shot at another Tingle Creek next month.

Solar Impulse, like Sire De Grugy, chased home Sprinter Sacre in the Grade 1 Celebration Chase at Sandown on his final start of last season and while Sean Bowen retains the ride, he runs today trained for the first time by Christopher Kellett.

Daryl Jacob has been a friend of punters in recent weeks and was showing a level stakes profit of £71.70 prior to yesterday's racing. That figure would be boosted again if he can guide Croco Bay to victory today.

What they say
Gary Moore, trainer of Sire De Grugy
He's in good heart but obviously has to give a fair bit of weight away. It's the first time he's had his ground for a while – if it is genuinely soft on the chase course – and it's a track he has a good record at, so we're hopeful of a big run.

Nicky Henderson, trainer of Vaniteux
He's in good form and we had hoped to run at Haydock [yesterday] in the graduation chase but that would have been too soft. We're hoping Ascot won't be quite as bad for what is a very nice prize.

Christopher Kellett, trainer of Solar Impulse
He's a lovely horse to have, we bought him from the Doncaster Sales in May. We've got him in good form, I think he's really fit but my only doubt would be the ground if it comes up too soft for him.

Colin Tizzard, trainer of Quite By Chance
He surprised us last time, winning by six lengths in a course record. He was a different horse to what he had shown before. It was a big step up on what he had achieved but the 8lb rise is pretty reasonable for what he did and he would have a chance.

Pauline Robson, trainer of Upsilon Bleu
When you have a horse rated higher than 140 in the north, you just have to jump in the wagon and travel. There are a lot of good horses in the race but we just have to take our chance and run. He's a lovely horse and always gives his best. This is a stepping stone back to the Castleford at Wetherby, which he's won before.

Tom George, trainer of Some Buckle
He was probably going just a bit too well last time and finding it a bit too easy when he freewheeled into the cross fence and made a nasty mistake. He has done plenty of schooling since and jumped well. We are dropping it back in trip and if they go a stride quicker that just might help him.