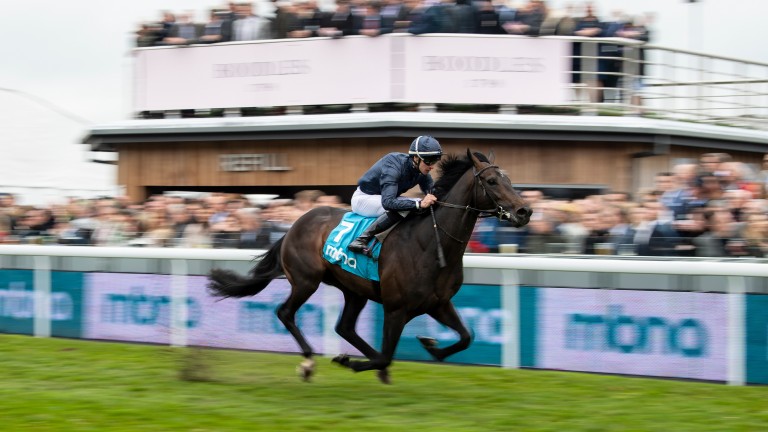 Sir Dragonet: an impressive winner of the Chester Vase
Edward Whitaker
1 of 1
By Andrew Dietz UPDATED 7:29AM, MAY 10 2019

The secret is out. Sir Dragonet was not seen in public until last month but after demolishing his rivals in a key Classic trial just 13 days on from his successful debut, the son of Camelot was propelled to 5-1 second favourite for next month's Investec Derby.

It is rare for a colt unraced at two to arrive on the Epsom scene in such breathtaking style and as the magnitude of the eight-length success began to sink in, it became clear even those closest to Aidan O'Brien's apparent stable second-string were caught on the hop.

"We thought he was a big baby at home which is why he's not entered in the Derby," said Coolmore representative Paul Smith. "The lads will look at it and make a decision a week or two before Epsom.

"He'd just had the one run. We needed to educate him and this was a good place to come. He's got a beautiful Galileo pedigree by Camelot so it's all there and he obviously comes alive at the track."

Sir Dragonet, who returned at 14-1 when winning his maiden at Tipperary, will need to be supplemented for the Derby at a cost of £85,000 but now rates as Ballydoyle's chief hope in the market behind champion two-year-old Too Darn Hot.

Without an entry for Epsom, he had not even been quoted in the Derby betting by some firms beforehand, but Betfair introduced him at 10-1 after the race before his odds tumbled.

With Qipco 2,000 Guineas winner Magna Grecia likely to stick to a mile, the trials are set to dictate the make-up of the O'Brien team.

"We've got here, Lingfield and the Derrinstown at Leopardstown to work out the pecking order and the boys can see where they want to go with him," said Smith. "It gives Aidan a fantastic yardstick doesn't it? It's good to get a sleeper too – a horse no-one knows about. With the big horses, you get nervous but with these it's a fact-finding mission and hopefully we've stumbled on one."

Taken off his feet in the early stages, Sir Dragonet got into a good rhythm before taking off in the home straight to provide the trainer with a ninth victory in the race.

Stablemate Norway, the mount of Ryan Moore, stayed on in vain pursuit for second but as with the 2,000 Guineas on Saturday, it was O'Brien's son Donnacha on the right horse.

"They went a good pace up front and I could tell three or four furlongs out I was going to win," said the winning jockey. "He was green more than anything [in the early stages] but there's a big engine in there once you ask him.

"He's never shown a lot at home but some of these well-bred horses learn to fall asleep and save it for the track. He bends his knee a little bit so a bit of juice was never going to be any harm to him and I'm sure he'll be fine on better ground as well."

Read exclusive previews of Chester's May meeting from 6pm daily this week on racingpost.com and the Racing Post mobile app

FIRST PUBLISHED 3:49PM, MAY 8 2019
He's got a beautiful Galileo pedigree by Camelot so it's all there and he obviously comes alive at the track

Ballydoyle battalions primed to give Aidan O'Brien a ninth Queen's Vase win Follow the market and you won't go far wrong with Ward's Royal Ascot juveniles Can Love buck the trends for a winning return? Graeme Rodway says it's a big ask The power of Love is set to be tested as Frankie's Lord seeks Royal Ascot repeat Juan Elcano pounces late to secure Wolferton win for Atzeni and Ryan 'Exactly what I was expecting' - Bolger delight as Poetic Flare runs riot