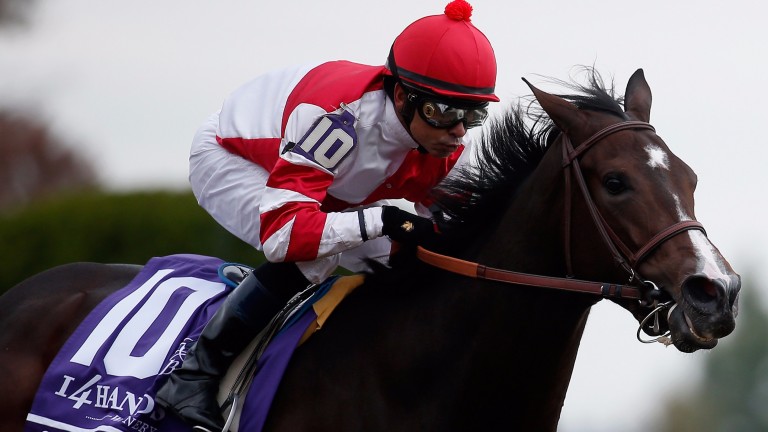 California Chrome, Tepin and the rest may be playing catch-up when they appear on Saturday as some believe the real star of this year's Breeders' Cup is in action on Friday.

Songbird has attracted a huge following in winning each of her 11 races and has claims to be regarded as the best three-year-old of either sex in the US.

Her unbeaten record is not a carefully-nursed one, the result of picking and choosing opponents and ducking challenges. Rather she has taken on all-comers and beaten them - hollow.

Seven of Songbird's 11 appearances have been in Grade 1 company and her five-and-three-quarter-length win in the Cotillion Stakes at Parx Racing in Philadelphia last time took her cumulative margin of victory to beyond 60 lengths.

She will be one of the hottest favourites of the meeting when she bids to make it 12 from 12 in the Longines Breeders' Cup Distaff, and Jerry Hollendorfer is relishing the experience of training her.

"As a trainer, you get lucky to have a filly like this," he said. "So you've just got to take it in stride and enjoy while you can.

"When we received her, she was thought to be special and I think she's proven that with her consistency. This is a bigger challenge but we feel like she's up to it."

Mike Smith has won more Breeders’ Cup races than any other jockey and is in a good position to judge Songbird as he also rode top mares Azeri and Zenyatta.

"No question, Songbird is such a special filly," he said. "So was Zenyatta. It's always difficult - and sometimes unfair - to make comparisons between them. But, I can say that for a horse at her age, Songbird has the fastest cruising speed of any of them."

Owner Rick Porter added: "If you can’t get excited about having a horse like Songbird, you need to get out of the sport."

Songbird won last year's Breeders' Cup Juvenile Fillies' at Keeneland, where Stellar Wind finished a close second in this event - and might have been awarded the race after being hampered by the winner Stopchargingmaria.

"There was a long inquiry and we thought we were going to get put up to win," trainer John Sadler recalled. "She got floated out and bumped twice in the stretch.

"I think it helped her win the Eclipse Award because all the writers were there and could see she was the best horse in the race."

Stellar Wind, who warmed up for her bid to go one place better by landing last month's Zenyatta Stakes, is drawn outside Songbird in stall five and Sadler said: "I think it's fair to say we got a good draw. Whether it’s the best I don't know."

Beholder, whose tally of 17 victories includes this race in 2013, was just a neck behind Stellar Wind in the Zenyatta and is drawn eight of eight here.

"It'll be nice to get her off the rail," said trainer Richard Mandella "But no matter what post you have, you have to have good luck. I'm a bigger believer in good luck than good posts. But I'm happy to be out there."

FIRST PUBLISHED 6:05PM, NOV 3 2016
If you cannot get excited about having a horse like Songbird, you need to get out of the sport