RP Classics A DAY IN THE LIFE

Simon Holt: 'You're trying to find the right words at the right time'

Steve Dennis spends a day with the top commentator 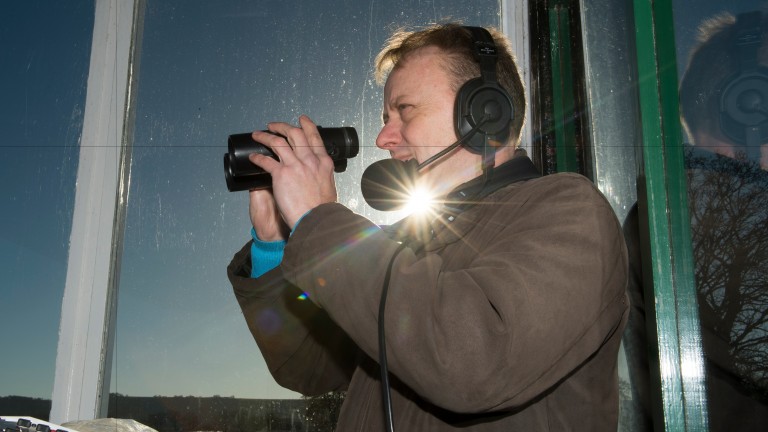 And . . . they're off. Simon Holt intones the time-honoured words, shifts his microphone a fraction to the left, all the better to hear him with, settles comfortably into the first race at Plumpton and settles the listener down too.

It's how a million stories start, a million tales of the unexpected and of the perfectly straightforward, the commentator's voice the backdrop to triumph and disaster and treating them both the same. Disaster comes early – Black Caesar goes at the first flight – and triumph comes just under two miles later, Holt's steadily rising voice as natural an accompaniment to the action as the sound of hooves.

"River Frost and Barry Geraghty kicking away, getting the better of Burrows Park, a length clear, Burrows Park sticking to the task but River Frost has plenty in hand . . . "

Holt watches them pass the post, lifts off his headphones, puts down the trusty Zeiss 10x40 binoculars through which he sees the racing world, then says what he sees. One race down, five to go, another two and a half hours in the chilly crow's nest at Plumpton; Holt the professional never lets his teeth chatter.

"It's one of my local tracks, it's a nice track, a fair track, it's a relatively easy place to commentate from. There are no traps; I enjoy coming here," says Holt, who has called them home at every meeting here this season, immersing himself in the shallow pool of horses who can be reckoned Plumpton regulars. That's a help, as are the smallish fields, although small is not always beautiful for the commentator. 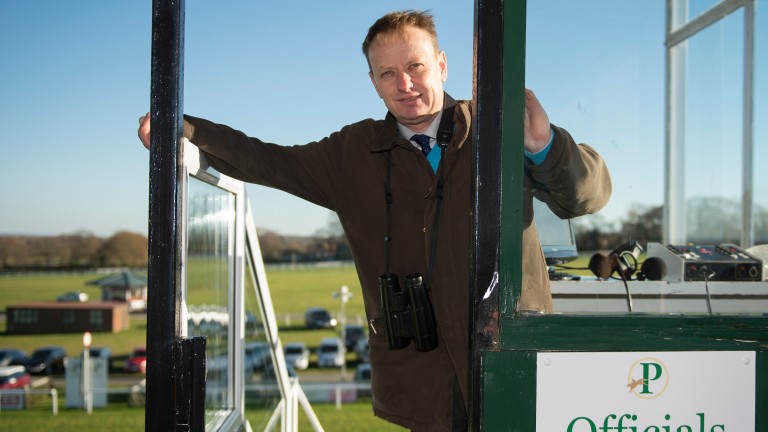 'It's one of my local tracks, it's a nice track, a fair track, it's a relatively easy place to commentate from. There are no traps; I enjoy coming here'
Edward Whitaker
"A four-runner novice chase wouldn't necessarily be the most straightforward," he adds, before coping ably with the four-runner novice chase, filling in the short longueurs between fences as the running order barely alters, noodling usefully away like a practised session guitarist, keeping the crowd up to date even when there's nothing much happening. Such effortlessness is honed by careful preparation.

"I browse through the colours the night before, make sure I'm aware of who'll make the running, add in a few details that I might need along the way," he says, showing the inked-in annotations to his racecard.

"It's better not to prepare any set phrases, it can sound contrived, you're better off trying to find the right words at the right time to reflect the occasion – conveying the drama rather than adding to it yourself.

"The hardest races are the ones where you don't know the horses. The Windsor Castle Stakes at Royal Ascot, 20-odd two-year-olds some of whom you've never even heard of before – that's much more challenging even than the high pressure of the Champion Hurdle and the Gold Cup, simply because you're familiar with every runner in those races."

Holt, 52, moved into commentating after working on The Sporting Life, brought to the role what he'd absorbed from listening to Sir Peter O'Sullevan and a couple of crack Australian callers in John Tapp and Ian Craig, stealing from every source like any good craftsman and adding his own rhythms to the mix.

He mutters about a quiet day at Plumpton perhaps lacking the frenetic edge of Cheltenham or Aintree, warns about the increased potential for complacency to herald the arrival of Captain Cock-Up, keeps his eye on the ball and on Noel Fehily when Very Extravagant falls in the third race, switches the attention between the screen on his console and his Zeiss to tell the crowd that the horse is up, and the jockey isn't.

"Accuracy is the watchword," he says. "There's a crowd here and people watching on television, and they want to know where their horse is and what's happening in the race.

'Important to be informative'

"After that it's important to be informative, to tell the story of the race, and only after that to bring entertainment into play. Diction, too, is vital – if you don't speak clearly it defeats the whole purpose of the job."

He adds the rider that a pleasant speaking voice is an advantage, Holt's honeyed tones perhaps lacking the mellifluous gravitas of raceday announcer Milton Johns but nevertheless uninflected, unaccented, unobtrusive.

He gives them a rest between races, wanders here and there around the grounds like a regular racegoer, finds spare time to give 16-year-old would-be commentator Kyle Merrick a few trade secrets and the warming solace of encouragement.

Next year, though, Channel 4 veteran Holt's voice will be heard less often in the racing world, the new brooms of ITV Racing having declared it superfluous to their requirements. He has taken their decision with good grace, although the execution of it evidently rankles.

"It was disappointing, the time they took in letting me know the situation when the decision had clearly been made," he says, choosing his words carefully, as befits the trade.

"I can appreciate that they considered me to be too linked with Channel 4, I'm okay with that, but it would have been only good manners not to keep me hanging on."

He shrugs, outlines his plans for next year and beyond, reckons he'll have 90 days a year on-course, more time to spend assembling ideas for his weekly columns for the Weekender and sportinglife.com, to step back and see where the next stage of life will take him.

In the short-term, it's back up the stairs for the rest of the card, all the way to the fading light of the bumper, which he deftly concludes by mentioning the deftness with which Noel Fehily – yes, he got up –pulls his whip through to keep the winner If The Cap Fits straight on the run-in. 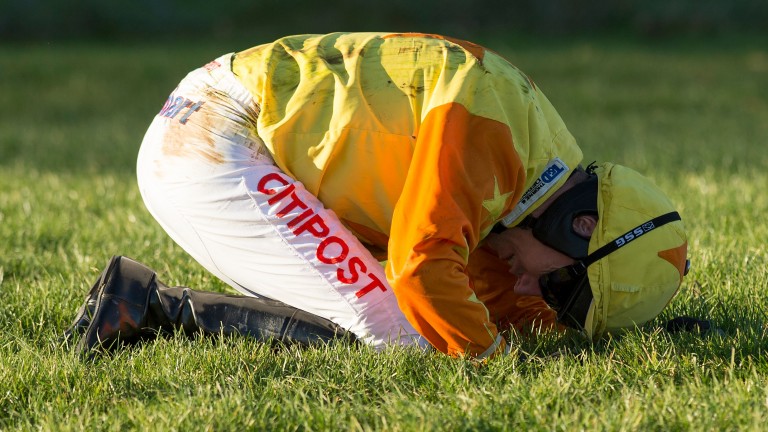 You can't keep a good man down: Noel Fehily takes a little time to recover from his fall on Very Extravagant before landing the bumper on If The Cap Fits
Edward Whitaker
"I've been lucky to find something to do in life that I can do well, and I appreciate that," he says, satisfied with the afternoon's work, priming himself for the habitual swift exit, for once the last horse in the last race has crossed the line Holt's day is done.

He grins, says he isn't the fastest out by any means, says he could name two commentators who are Group 1-class at leaving the racecourse before the jockeys have even pulled up.

And . . . he's off. His farewell hangs in the wintry air, the voice staying in the memory long after its owner disappears into the dusk. 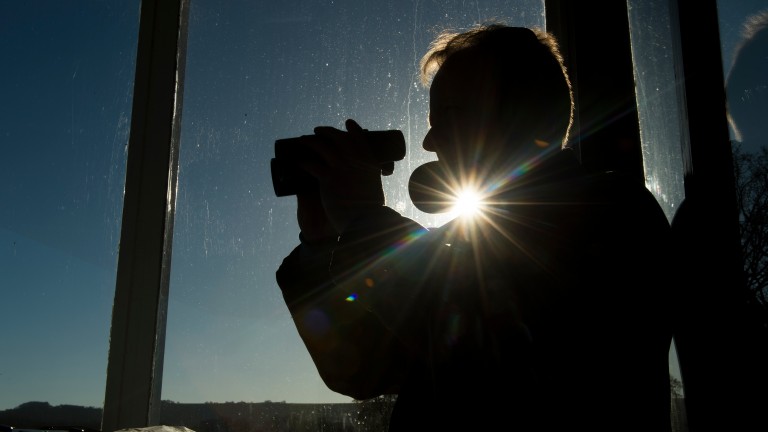