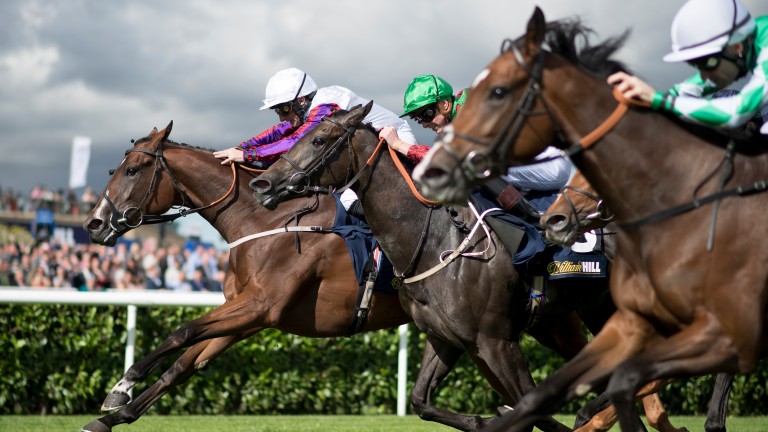 Dark Rose Angel, who finished second behind Qipco 1,000 Guineas contender Laurens in last year's May Hill Stakes, heads to France for her first start of the year.

The Simon Crisford-trained filly faces eight opponents in the Listed Prix Finland at Longchamp, including Herecomesthesun from the Archie Watson stable.

Dark Rose Angel was beaten a head by Laurens in the Doncaster Group 2 prize in September but disappointed next time out in the Oh So Sharp Stakes at Newmarket when not suited by the ground.

Crisford said: "She's doing really well and I'm very pleased with her. She's got great form from last year and this is a good race to start her off in."

Herecomesthesun already has French experience, having finished fourth in a Listed race at Fontainebleau in March.

Harry weighted for a repeat

According To Harry will have the chance to claim a second win in Ludlow's feature chase off the same handicap mark from which he struck 12 months ago.

In the Beer Goggles colours, According To Harry ran out a game winner of the HR Smith Handicap Chase (3.05) under Richard Johnson, for which he was raised 6lb, but he is back on 121 for his return visit.

Johnson will be in opposition on the Kerry Lee-trained Goodtoknow, so Sean Houlihan will have his first spin on the nine-year-old.

"He's been up the weights and come back down again," said trainer Nicky Martin on Monday.

"I hadn't even realised it was the race he won last year until this morning. It's just that he likes Ludlow, the distance is right for him and the ground, providing it doesn't get any faster, will be fine.

"I'd say he's in the same form as he was last year, definitely, and I've put Sean Houlihan on, who is claiming 5lb, which should help a little bit."

Seaside racing returns as Yarmouth and Brighton host their first fixtures of the year.

Yarmouth's card has been well supported by the major Newmarket yards and could produce some interesting horses to follow, if not in time for the Classics but for Royal Ascot and beyond.

They include Corrosive, a Qipco 2,000 Guineas entry and son of Uncle Mo who won a Kempton novice after finishing fifth in the Convivial Maiden Stakes at York.

A wet spring and a preference for fast ground have prevented the colt being readied for the Guineas, according to Palmer.

Of his runner, who contests division one of the mile novice race (2.25), Palmer said in his Racing Post stable tour: "He's definitely improved out of sight from two to three and is a stakes horse all day long.

"I expect the Heron Stakes at Sandown would follow and winners of that have run well in the St James's Palace before, and that might be the progression if everything went right."

Division two (2.55) could be informative as well as it features another 2,000 Guineas entry Without Parole, a son of Frankel who made a promising debut when getting off the mark at Newcastle in December by six lengths.

The colt, who is trained by John Gosden and will be ridden by Frankie Dettori, also holds a Betfred Dante Stakes entry. His owner-breeder John Gunther also bred Kentucky Derby favourite Justify.

FIRST PUBLISHED 6:38PM, APR 23 2018
He's definitely improved out of sight from two to three and is a stakes horse all day long