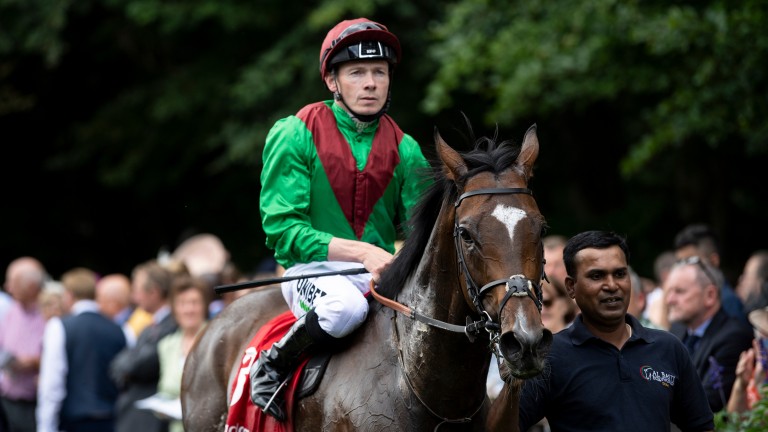 Spanish Mission and Jamie Spencer will be in action at Meydan
Edward Whitaker
1 of 1
By Jason Ford 6:45PM, FEB 26 2020

With the dress rehearsal for the Dubai World Cup meeting approaching next week and regional attention focused on the inaugural Saudi Cup fixture this weekend, Thursday's ninth meeting of the 2020 Dubai World Cup Carnival is highlighted by the Group 3 Nad Al Sheba Trophy.

Sine its inception in 2010, the 1m6f contest race has been dominated by Godolphin who have saddled eight of its winners.

Only South African Mike de Kock, who is not represented this year, and David Simcock have broken that stranglehold and the latter saddles a fascinating contender in the shape of Spanish Mission who he will be hoping can emulate former stablemate Sheikhzayedroad who won this in 2016.

Jamie Spencer takes the ride and will appear at Meydan for the first time since Dubai World Cup night in March 2017.

Spencer will be sporting the silks of Team Valor, whose CEO Barry Irwin said: "The horse has been in Dubai two weeks and has settled in well.

"Thursday's race will tell us which race to target on Dubai World Cup night, be it the Sheema Classic or the Dubai Gold Cup over two miles. We hope he is a Melbourne Cup horse long term."

With his father, John, suspended, David Egan takes his Meydan bow aboard the Mick Channon-trained Koeman but will face a strong Godolphin challenge.

Charlie Appleby has saddled the last two winners and this year relies on Secret Advisor and Dubhe, who finished first and third over course and distance in the Meydan Trophy last month.

They were separated on that occasion by Dubai Horizon, the choice of Christophe Soumillon, one of three in the race for four-time winner Saeed bin Suroor.

The dirt feature on the card is the Curlin Stakes, a Listed handicap over the Dubai World Cup course. Both the race's namesake and California Chrome won the race the en route to victory in Dubai;s flagship contest.

Egan again steps in for his father aboard the Jane Chapple-Hyam-trained Ambassadorial, who has yet to prove his stamina over this trip and has to concede weight to his 11 rivals.

Parsimony looks a real threat for trainer Doug O’Neill, as does Denmark's Red Cactus, but both will have to contend with a strong group of locally trained horses who have a strong record in dirt handicaps at Meydan.

Doug Watson saddles three, all previous course-and-distance winners, with Pat Dobbs opting to partner Grand Argentier, certain to be vociferously supported by the EERC syndicate who own him.

Satish Seemar currently tops the local trainers' championship and will rely on George Villiers, the fourth runner in the race to have scored over course and distance.

The Listed Meydan Classic has attracted a field of 14 and looks wide open. Jockey bookings suggest Well Of Wisdom and Lost In Time are the main hopes of Charlie Appleby and Saeed bin Suroor respectively.

FIRST PUBLISHED 6:45PM, FEB 26 2020
Thursday's race will tell us which race to target on Dubai World Cup night, be it the Sheema Classic or the Dubai Gold Cup over two miles

'It's been a great week' - Charlie Appleby's amazing run of success continues Size is everything after all as Snowfall and Adayar shoulder their rivals aside 'I like fast things - as well as Adayar I like to partner planes out of Duxford' Charlie Appleby reveals next step for Derby hero Adayar with Arc on the horizon 'I'd work another 15 years as hard as I could to have one more day like that' All-weather to all-conquering: Kirby rises to occasion to become a Derby hero