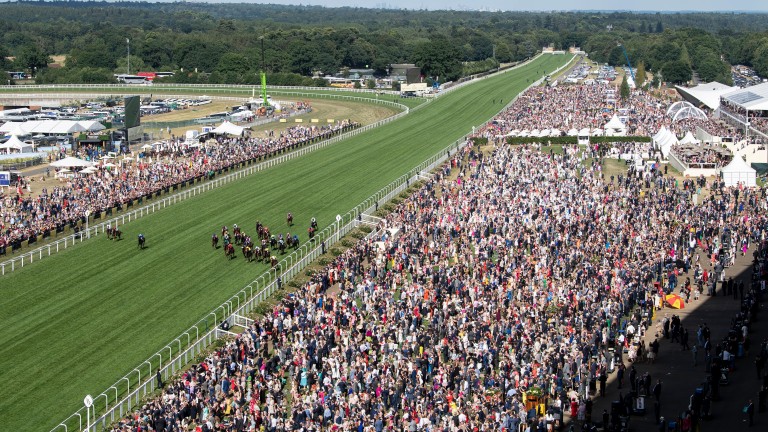 Simon Crisford can look back upon countless Royal Ascot highlights in his 20-odd years as racing manager to Godolphin, but he will never forget his first winner as a licence holder – with Ostilio in a race Godolphin have never won.

The Britannia Stakes might not be one of the royal meeting's marquee events, but any winner at the meeting is special for everyone involved.

This one was made all the more memorable by an extraordinarily ballsy ride from Silvestre de Sousa, who brought the Newmarket winner across to the stands' rail from stall 15 and set a pace that saw him race five lengths clear of his group and then defy all expectations by holding on well.

"I'm just so thrilled. It's an unbelievable feeling," said Crisford, who is in just his fourth season.

"I came here with Godolphin; we'd have four favourites on the first day, second day, third day – we'd win two, be beaten in the other two, 65-odd winners at the highest level, but I have to say we never won a Britannia!

"I've ticked that box now. Fantastic, and what a lovely horse. I thought the handicapper underrated him when he was second at Yarmouth to [St James's Palace winner] Without Parole. Without wanting to put a curse on the horse I really fancied him and thought he would go well."

Ostilio races for Sheikh Mohammed Obaid, who has supported Crisford from the start. Crisford explained: "Our association goes back to the Dubawi days [Sheikh Mohammed Obaid bred Dubawi and raced him under the Godolphin umbrella], hence when I started training he supported me. He's been a great supporter. He's always backed me."

It was to De Sousa's advantage that retained rider Andrea Atzeni chose the Sheikh's disappointing Sam Gold, but the Brazilian disobeyed orders, having been instructed to hold on to Ostilio and stalk, as the son of New Approach can be gassy.

De Sousa, described by Crisford as "the greatest – a proper, proper top international jockey" – said: "I changed my mind like I often do. He showed me a lot of speed  and I chose to go to the rail to give him a bit of support. I was praying for the line and it came in time. He's a nice horse but still a baby."