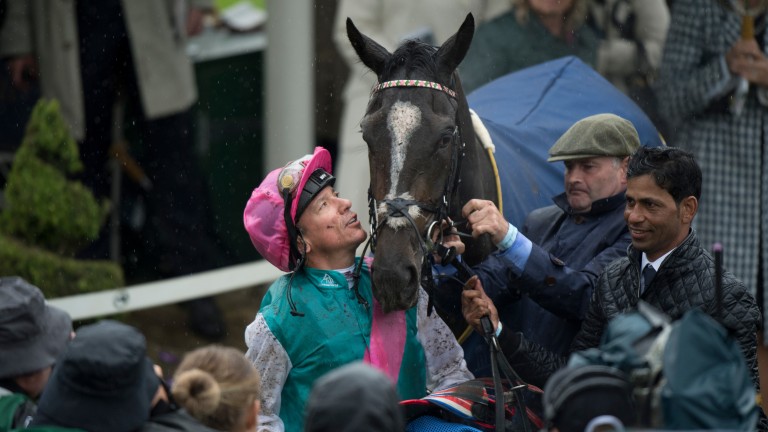 Racing is full of unusual trends and one of the oddest is set to continue after a damp running of the Tattersalls Musidora Stakes.

It was no surprise that John Gosden should maintain his domination of this Group 3 contest with Shutter Speed's victory – he invariably has a good bunch of middle-distance fillies and he knows what to do with them.

But what is strange, given the trainer's record of top-level success, is that none of his four winners in the past six years in a race that is generally the best Oaks trial went on to land the Investec Oaks itself. And that trend seems unlikely to be broken with Shutter Speed, who will be aimed at the French equivalent, the Prix de Diane at Chantilly, instead.

Her victory by a length and three-quarters added to Gosden's recent run of success in the Musidora, yet two of his previous winners, The Fugue (2012) and Star Of Seville (2015), were beaten at Epsom, while So Mi Dar might have prevailed last year had she not been forced to miss the race by injury and Joviality (2011) was never considered for the Oaks as the 1m4f trip was reckoned to be beyond her.

Stamina concerns are also the reason why Shutter Speed is likely to go for the Prix de Diane. Even this 1m2½f trip was a worry for Khalid Abdullah's unbeaten three-year-old, given the heavy and persistent rain that fell from lunchtime onwards, and she was given the go-ahead to run only after the second race.

The 4-7 favourite moved smoothly into the lead over two furlongs from home but she had to be pushed along in the latter stages by Frankie Dettori, who reckoned she was coming to the end of her tether.

"The ground was very testing today, which she hated," the jockey said. "When I hit the line I wasn't actually flying, I felt that was about it. A mile and a quarter to me would be ideal."

Abdullah's racing manager Teddy Grimthorpe is chairman at York, whose ground had been getting unseasonably firm during the dry spring.

"I always say you have to be careful what you wish for," he joked. "We had no rain for over a month and now we've had a month's rain within a day.

"So it was stamina-sapping, to say the least. On faster ground she's going to be much more effective.

Of course, aiming at France is an easier decision to make when you have a ready-made Oaks candidate in Enable, who looked much more a stayer when winning at Chester last week and whose Epsom odds were cut by several firms after the Musidora.

"I've always thought a mile and a quarter seems absolutely spot on for Shutter Speed," Grimthorpe said. "I think in John's mind's eye and in Prince Khalid's she would probably head for the French Oaks. And Enable is in good form, so I hope she would head to Epsom."

Musidora runner-up Vintage Folly, who delighted Hugo Palmer with her second place, could be Epsom-bound.

"For a filly having her first run of the year and only the second of her life, against more experienced fillies. that was very pleasing," the trainer said.

"She has plenty of options and will run where it rains. She loves this ground. If the word soft is in the going description at Epsom I'll be talking to the owner about the Oaks."

FIRST PUBLISHED 4:13PM, MAY 17 2017
That was very pleasing, she has done it with a bit of class. She travelled well