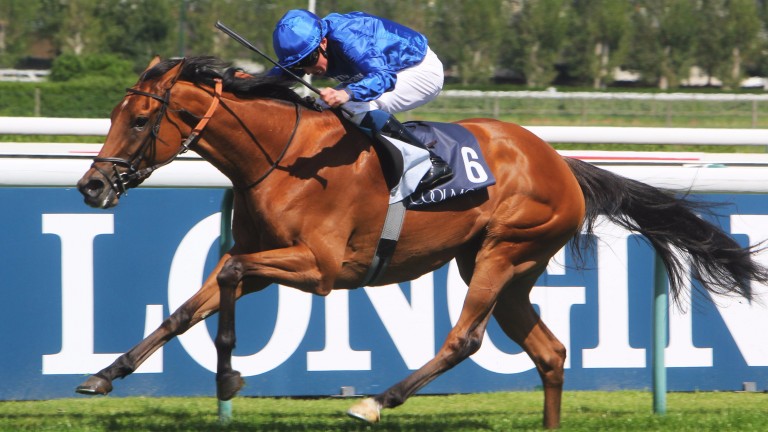 Sobetsu, generally a 10-1 shot for the Investec Oaks, will instead run in France's Prix de Diane.

Winner of the Group 1 Prix Saint-Alary on Sunday, the Godolphin-owned filly will remain in France for her next race.

Trainer Charlie Appleby said: "John [Ferguson, Godolphin chief executive] and I have discussed it with His Highness Sheikh Mohammed, and the final decision is that we target the Prix de Diane.

"The ground at Deauville, which in my opinion was 'Good to Soft,' was a key factor in her success, and she is more likely to get the ground she likes at Chantilly than at Epsom."

Investec Oaks third favourite Shutter Speed is set to face four rivals when she goes on trial for Epsom in the Tattersalls Musidora Stakes at York on Wedenesday.

The John Gosden-trained filly was declared alongside two other Oaks entries Serenada, from the Roger Varian stable, and Vintage Folly (Hugo Palmer) for the Group 3. Vociferous Marina, who won a Listed prize at Navan for Jim Bolger, and the Mark Johnston-trained Miss Infinity complete the field.

Shutter Speed beat a field that included stablemate and subsequent Cheshire Oaks winner Enable when opening her campaign with a comfortable win at Newbury last month and is a top priced 7-1 for the fillies' Classic.

She has been installed at 4-11 by bet365 to record a third Musidora win in a row for Gosden who has captured four of the last six runnings.

Lord Grimthorpe, racing manager to her owner Prince Khalid, said: “Shutter Speed has come on very well since her Newbury run. It’s probably going to turn out to be a pretty decent race – we were delighted that Enable came out and won the Cheshire Oaks last Wednesday, which franks the form a little bit.

“Shutter Speed herself has been in great shape and we're really looking forward to running her at York. The main thing for us is for her to have a good race and get into a good rhythm.

“York will be a good test for her and hopefully will provide us with a good indication of where she should go. She has the option of the Oaks at Epsom and the Prix de Diane as well.

“Enable will go to the Oaks, all being well. But if we thought it was the right thing for Shutter Speed to go, we would still go with her. Her pedigree suggests that a mile and a quarter could be her best trip but we’ll see.”

Star Of Seville, the 2015 winner, went on to land the Prix de Diane but an Oaks heroine has not prevailed since Sariska in 2009.

Abernant Stakes winner Brando is one of 13 declared for the Group 2 Duke of York Clipper Logistics Stakes, which also features last year's winner Magical Memory, on the opening day of the meeting on Wednesday.

The ground is good, good to firm in places following 5mm of rain on Monday.