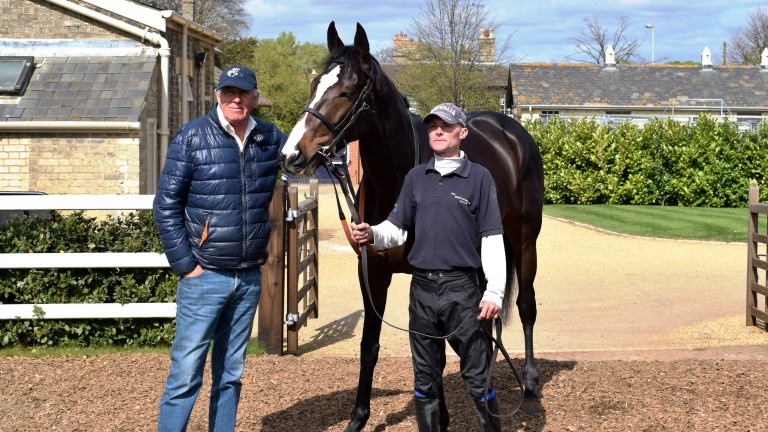 Gosden conveyed his recovering jockey Nicky Mackay to watch his second lot work on the Al Bahathri Polytrack and the rider was soon turning around on his crutches to watch the Yarmouth winner fly by. The daughter of Dansili is one of a few fringe horses in the 1,000 Guineas picture at Clarehaven and is set to test her Classic credentials at Newbury's Greenham meeting.

Jim Crowley plans to ride out twice a week in Newmarket this season and found time from his Hamdan Al Maktoum duties to partner the promising Frankel colt on the Limekilns Trial Ground. As he did when winning his maiden on the Rowley Mile, the three-year-old takes time to find his stride but was well on top at the close of a seven furlong exercise and will trial back at Newmarket next week.

Now situated close to the Bury Side gallops at Carlburg, Varian can have a lie in and still get to the Limekilns and Al Bahathri early and this recent Doncaster maiden winner shone at the latter venue at second lot. Andrea Atzeni was stepping on the revs on the son of Dubawi who may tackle a 1m2f conditions contest at Newbury on Friday week.

A recent arrival from Italy, the six-year-old looked a class act on the Al Bahathri Polytrack at second lot where he stepped clear of his lead horse under Stevie Donohoe. A four-time winner at Group level in Italy and Germany, the son of Footstepsinthesand already tops the bill at Abington Place and is set for his first outing on British soil in the Listed Paradise Stakes at Ascot on May 3.

Never Back Down
Hugo Palmer

Palmer is hoping to unleash this two-year-old son of Kodiac in the 5f conditions contest at the Craven meeting, a race he won with Gifted Master in 2015. The 100,000 guineas purchase was giving out all the right signals in his work on the Al Bahathri and is managed for a new middle eastern owner by agent Armando Duarte.

FIRST PUBLISHED 4:28PM, APR 12 2017
The rider was soon turning around on his crutches to watch the Yarmouth winner fly by