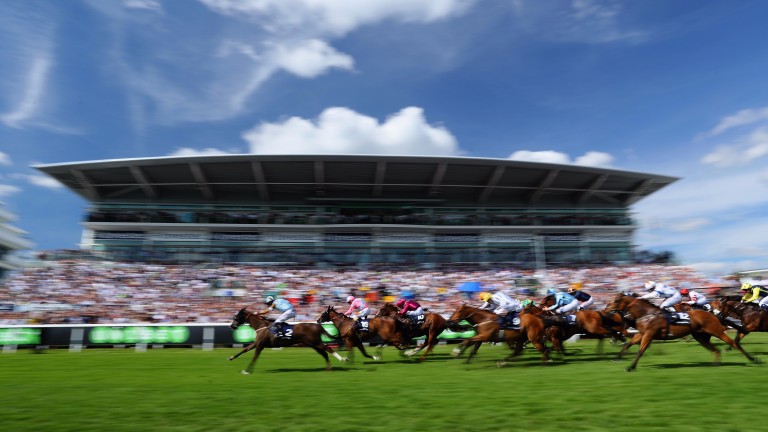 He may not have been the among the headline horses following the Derby meeting at Epsom but Andrew Balding's Dark Shot certainly put in one of the most eye-catching displays of the two days in the Dash.

Having struggled to go with the lightning speed early on, Dark Shot was produced from the back of the field to finish only a short head behind Caspian Prince and bids to go one better in the feature race on Salisbury's Sunday card.

Balding believes Jeff Smith's homebred four-year-old is firmly on an upward curve, although he admitted to concerns that the likely different tempo of this six-furlong contest, compared to that at Epsom earlier in the month, might not be to Dark Shot's liking.

"He was a little outpaced early on at Epsom but came good in the second half of the race," said Balding.

"This race will probably be run at a different tempo, so that could be a bit of a question mark, but he's very progressive and rather like his mother Dark Missile, who I also had, he seems to be improving.

"The owner has an extensive breeding operation and black type is very important, even though he's a gelding and there's every chance he could be placed on the merit of that Epsom performance. He's very versatile ground-wise and the extra furlong should play to his advantage."

Balding is also hoping for a win in the race immediately following the Cathedral Stakes, with Luna Eclipse bidding to build on his debut third in a novice stakes race named in honour of the trainer's late uncle Toby.

"He had a run over five furlongs on soft ground so it will be very different conditions this time, but I'd hope he'll run well," Balding said.

Brendan Powell, trainer of Dark Emerald
His wind was very bad when he was in Dubai, he made a horrendous noise. We ran him at Doncaster first day of the season and he choked his head off again. He's had a wind operation and, touch wood, he seems to be a completely different horse since. He's probably more of a seven-furlong horse but he did win at Hamilton before he went to Dubai and, soundness-wise, it's the best I've had him. We need to start him somewhere and it looks an ideal race.

Richard Fahey, trainer of Mr Lupton
We're happy with him and he's the top-rated horse in the race, so he must have a decent chance.

David Simcock, trainer of Glass Office
He broke down in the Diamond Jubilee Stakes at Ascot two years ago, which was a shame, and it's been a long road to recovery. It's nice to have him back and he shows he retains all his enthusiasm, but he does look big and will be better for the run.

Dean Ivory, trainer of Tropics
He seems very well in himself, although I'd have liked a bit more cut in the ground for him ideally. They've promised to water.

Bryan Smart, trainer of Mythmaker
He's in good order and I'm very pleased with him, he's not stopped improving in the last couple of years. He won well last time in a hot conditions race and I think he's got every chance of running a big race again.

FIRST PUBLISHED 6:00PM, JUN 17 2017
He's very progressive and rather like his mother Dark Missile, who I also had, he seems to be improving