Shoemark confident he can still claim crown despite ten-day ban 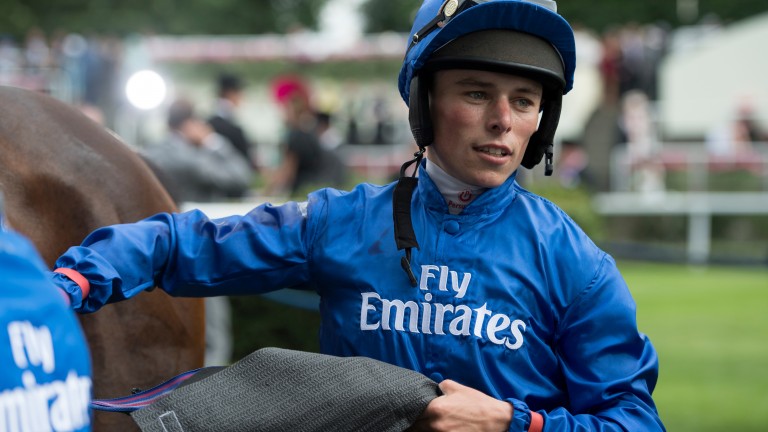 Kieran Shoemark: picked up a ten-day suspension for failing to ride out to the line at Kempton
Edward Whitaker
1 of 1
By Jack Haynes UPDATED 10:10PM, AUG 10 2017

Kieran Shoemark believes he can still win the apprentice championship despite being suspended for ten days for failing to ride out to the line at Kempton on Wednesday evening.

The jockey, who is one winner behind David Egan in the apprentice title standings, will not appeal against the suspension he incurred aboard the John Gosden-trained newcomer West Palm Beach in the two-year-old novice stakes for fillies.

West Palm Beach appeared to have secured second place as she chased home winner and stablemate Verandah in the 7f contest but was caught in the final strides by Fille De Reve, who pipped her by a short head.

A stewards' inquiry ruled Shoemark had stopped riding shortly before the winning post and he was suspended from August 23 to September 1 inclusive.

Shoemark, who enjoyed Royal Ascot success aboard Atty Persse in the King George V Stakes, said: “I accept the decision and at this stage in my career there’s no point in upsetting anyone.

“My jockey coach, John Reid, told me as soon as you have a little bit of doubt in your mind you won’t overturn the decision. I didn’t see Jim Crowley coming on the stands' side of the track – it was raining heavily and my goggles steamed up.

“I hadn’t stopped riding – I had eased down three or four yards before the line and I hold my hands up.”

Paddy Power shortened Egan to 8-11 favourite (from 15-8) to lift the Stobart-backed apprentice crown, although Shoemark, who is now 5-4 (from 5-6), believes time is still on his side.

He said on Thursday: “I’m still confident I can win the apprentice title. Ten days is an inconvenience more than anything but it’s so dependent on hitting form at the right time.

“I had a winner last night but before that I hadn't had a winner for ten days, but at the end of July I had six in seven days so there’s always runs of form. There will still be time and I’m getting great support from lots of trainers.”

The apprentice championship runs until the last race on Qipco British Champions Day on Saturday, October 21.

If you're interested in this, you should read these:

FIRST PUBLISHED 1:45PM, AUG 10 2017
I hadn’t stopped riding - I had eased down three or four yards before the line and I hold my hands up