Cheltenham in shock as Many Clouds dies after stirring success 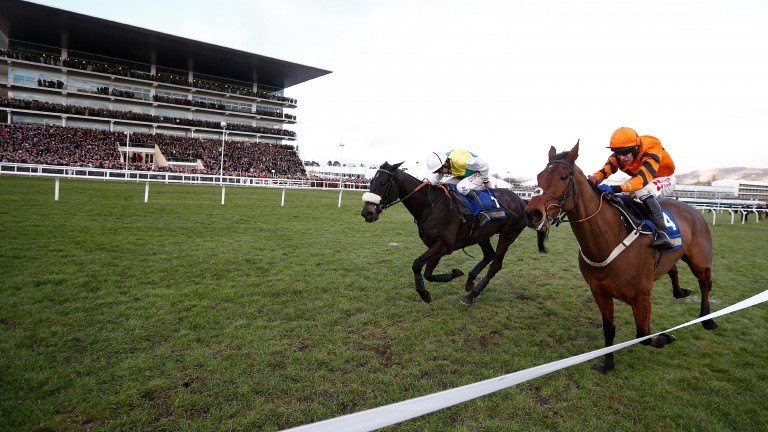 Many Clouds, the 2015 Grand National winner, collapsed and died on Saturday moments after inflicting a first defeat over fences on Gold Cup favourite Thistlecrack, leaving Cheltenham in a state of shock.

Seconds earlier the star of the Oliver Sherwood stable had produced one of his greatest performances as he battled back from the last fence to catch the King George VI Chase winner Thistlecrack to win a head verdict in a photo-finish.

Many Clouds went down shortly afterwards and was quickly attended to as the screens went up around him but he could not be saved.

A very emotional Oliver Sherwood: "What can I say? He gave his all and has left us doing what he loved doing. He jumped for fun and was so brave as he has just proved as he really fought like a lion but he has paid the penalty."

Michael Meagher, racing manager to Many Clouds's owner Trevor Hemmings, said: "The horse has been such a superstar down the seasons for Trevor and Oliver. It's very sad the way this has happened after such a brave win but he has gone out in a blaze of glory doing what he loved doing.

"He was a very public horse and everyone is very emotional which is so understandable as it was not the way it should have happened obviously. He has give everybody involved with him some wonderful days with the Grand National topping the lot.

"He won so many big races other than that like the Hennessy Gold Cup in 2014 and there is not a lot else to say at present as it's a blow for us all and all the people who have just cheered him on to such a brave win."

FIRST PUBLISHED 2:40PM, JAN 28 2017
It's very sad the way this has happened after such a brave win but he has gone out in a blaze of glory doing what he loved doing