Sheikhzayedroad and Trip To Paris gear up for gold run 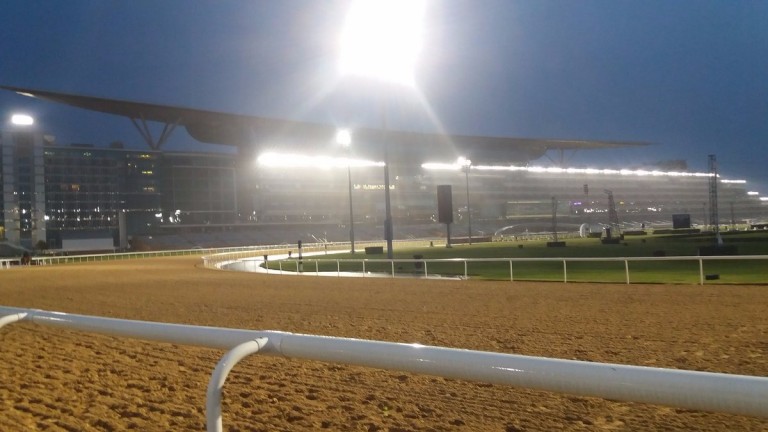 Rain and plenty of it meant the main turf course at Meydan was off limits on Tuesday morning so the Europeans stuck to the nearby training track as preparations for Saturday’s $30 million Dubai World Cup card gather pace.

The stayers were out in force preparing for what looks a quality renewal of the Group 2 Dubai Gold Cup, with light exercises for Trip To Paris and Sheikhzayedroad, while Ireland’s Melbourne Cup runner-up Heartbreak City did a sterner piece in the rain.

It will be Sheikhzayedroad’s fourth run on World Cup night and while he has yet to be successful at the carnival’s main event, connections are confident they are in the right race, having finished down the field in the Sheema Classic in the previous two years.

A Group 1 winner over a mile and a half in his youth, trainer David Simcock reinvented Sheikhzayedroad as a stayer last season with notable success, winning both the Doncaster Cup and Long Distance Cup on British Champions Day at Ascot and Simcock is hoping a pipe-opener at Meydan last month will have blown the cobwebs away before Saturday's Group 2 over two miles.

“He probably would have needed that first run more than usual as he’d had a nice, long break after Ascot,” said the trainer. “Time was short when he came here in February so you’d like to think he’d improve but I’ve no doubt Vazirabad looked like he’d improve as well.”

Last year’s winner Vazirabad, who finished one place ahead of Sheikhzayedroad last month, is a general 2-1 favourite for a repeat on Saturday, with Nad Al Sheba trophy winner Beautiful Romance second best at 6-1 with Betfred. The same firm go 10-1 about Sheikhzayedroad.

Trip To Paris, 25-1 for the race with Paddy Power, is another who is no stranger to foreign jaunts and there is confidence in his camp he is back to the form that led to him finishing fourth in the Melbourne Cup and runner-up in the Caulfield Cup in Australia in 2015.

Trainer Ed Dunlop’s right-hand man Robin Trevor-Jones said: “He arrived on Friday and is pretty straight. He just did a mile canter this morning and seems well to me. He’s four kilos above the racing weight he won off at Royal Ascot and we’ll probably work to get him to that again.”

Despite being drawn widest of all in stall 14, big-race rider Andrea Atzeni will have five furlongs to get his mount into a suitable position before the first bend and Trevor-Jones does not think the draw is insurmountable.

He added: “It’s a competitive race and on 2016 form he’s probably got no chance but there were a lot of excuses for that and hopefully we can put a line through it. If he can reproduce his 2015 form we’d quite fancy him.

“If you notice when he was running last year our horses were in terrible form so there were valid excuses. Looking at him and how he’s going we’ve got a chance.

"As long as Andrea doesn't get trapped wide I’ll be happy. He’s a stayer with a turn of foot and they’re lethal.”

FIRST PUBLISHED 10:01AM, MAR 21 2017
It’s difficult to tell if he’s in the same form as Ascot having not seen that much of him but you’d hope so and the track really suits him