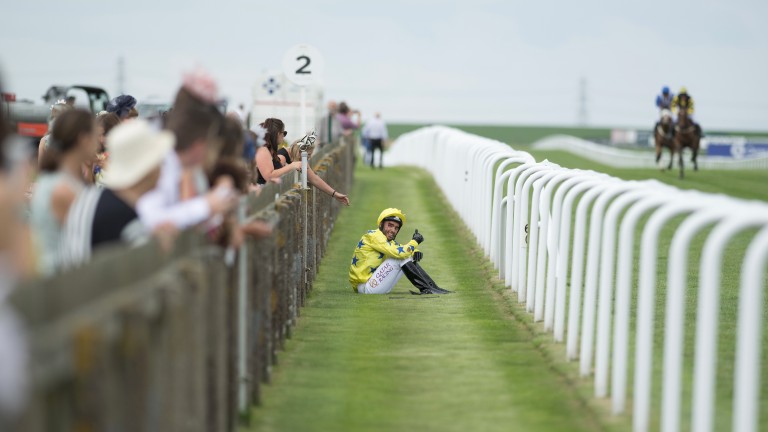 Sheikh Fahad on the floor after coming off Almagest in the Town Plate at Newmarket
Edward Whitaker
1 of 1
By Jon Lees 11:15AM, JUL 14 2017

Sheikh Fahad Al Thani suffered cuts to his head and face after he was unseated in an eventful running of the historic Newmarket Town Plate on Thursday.

The leading owner-breeder, who heads Qatar Racing, was bidding to win the prize for the second year running when he came off his mount Alamagest at the two-furlong pole.

Sheikh Fahad was contesting third place and appeared to be coming with a late challenge when he lost balance and fell off on top of the stands rails, crashing through them, near the family enclosure of the July course.

An ambulance was on the scene swiftly to attend Sheikh Fahad who was taken to the racecourse medical room for examination. Clerk of the course Michael Prosser said: "He's absolutely fine and is being checked over."

He was later said to be in good spirits as he left the course for additional treatment.

Riders who took part in the race said a piece of equipment may have come loose or broken, and Sheikh Fahad later confirmed the saddle had slipped. He tweeted: "What a shame. Saddle slipped. Thankfully I'm fine, just off to get a stitch or two to minor head wound. Thank you medical team at Newmarket."

Trainer Michael Mullineaux, who rode the third-placed Drivehomeregardless, said: "He was on my outside and his reins were like washing lines so I decided to take a tug. In the next 50 yards his horse went to the rail and something flipped off.

"I thought he had won the race and then he went. He looked a bit unsteady so I wasn't surprised to see him come off. I wonder whether a girth snapped or something. As long as he is all right, that's what's important."

The 348th running of the the 3m6f contest for amateur riders was won by the Tim Gredley-ridden Bivouac. In a dramatic race Keith Oakes was unshipped after the line from Bell Weir but was unscathed.

He also participated in the Mongol Derby, and got past halfway in what is regarded as the longest and toughest horserace in the world.