Queens of the Turf LADY REBECCA 50 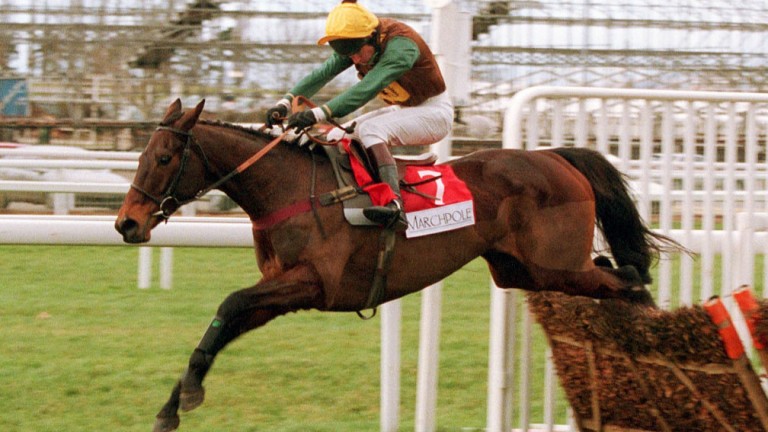 Lady Rebecca and Norman Williamson in action
Mark Cranham (racingpost.com/photos)
1 of 1
By Lewis Porteous 11:17AM, JAN 3 2017

She might have been diminutive to look at, but Lady Rebecca was all heart and her insatiable desire to win made her one of the most enduring racemares in memory.

Her story stems from humble beginnings but from little things big things did grow. As a yearling she was sold at Doncaster, only to be returned as a box-walker. With a blemish on her record, she sold for a second time 24 hours later to David Redvers for 400gns.

She was the first horse Redvers, now a well-respected racing agent and breeding advisor to Qatar Racing, had bought at public auction and never will he make a more inspired purchase.

"She kick-started my career and Venetia Williams',” Redvers says. "She was such a phenomenal Cinderella story, having cost so little, and proved it's not the size of the cheque but the size of the heart that matters."

She was given time to mature at Tweenhills Farm before syndicated to the Kinnersley Optimists and joining Williams, in just her second season, after her first trainer Simon Christian retired. She hit the ground running.

“I used to ride her quite a bit and she moved like a greyhound - she was quite small but massively athletic,” her trainer recalls.

Lady Rebecca rattled off three straight bumper wins for Williams, followed by two over hurdles, with her unbeaten run only ending at the 1998 Cheltenham Festival behind French Holly in the Royal & SunAlliance Novices’ Hurdle.

That defeat proved merely a blip and her next three starts all ended with emphatic wins. By this time her record at Cheltenham was two wins from three runs and, with a proven penchant for Prestbury Park, her career never swayed far from her favourite track.

Between December 1998 and February 1999 Lady Rebecca rattled off a hat-trick of wins at Cheltenham by a combined winning margin of 45 lengths, including a 20-length romp in the Cleeve Hurdle.

That win made her a leading contender for the 1999 Stayers’ Hurdle, where she cruised to the front after two out and remained in pole position until after the last.

However, with the emphasis on stamina, she succumbed first to Le Coudray and then the fast-finishing winner Anzum with the post just 100 yards away.

“The Cleeve was over two miles five, and at Cheltenham that was her distance,” Williams says. “She led over the last in the Stayers’ but didn’t quite get home.”

Normal service was resumed when she completed back-to-back Cleeve Hurdle wins following a ten-month absence, fighting tenaciously to hold off Bacchanal, who would take his revenge at the festival in March where Lady Rebecca was below her best.

She was also beaten at Punchestown on her next start, after which retirement and life as a broodmare beckoned, only for her to fail to get in foal and instead she returned to Williams for one last hurrah. Her crowning moment soon followed.

Expertly conditioned, Lady Rebecca made her return in the 2001 Cleeve, with a third straight win in the Grade 1 on the line.

Under regular rider Norman Williamson she made her move going down the hill, picked up the revs climbing up the other side and motored clear from the last for a decisive win that left Cheltenham tingling.

“The third Cleeve was special because she'd picked up an injury the previous season and had been retired,” Williams says. “She was the most remarkable mare I've had anything to do with."

It proved a fitting finale as recurring foot problems meant she never raced again, ending her career as the winner of 13 of her 19 starts and with seven wins from ten runs at her beloved Cheltenham.

After retiring to Redvers' Tweenhills Farm and Stud for her second career as a broodmare, Lady Rebecca died in 2013 at the age of 21 after suffering from colic.

“For all the thousands of horses I've had through my hands, I don't think there will be another who holds quite such a place," Redvers says.

FIRST PUBLISHED 6:00PM, JAN 1 2017
She moved like a greyhound - she was quite small but massively athletic