She prefers Polytrack but she has a realistic chance – Halford 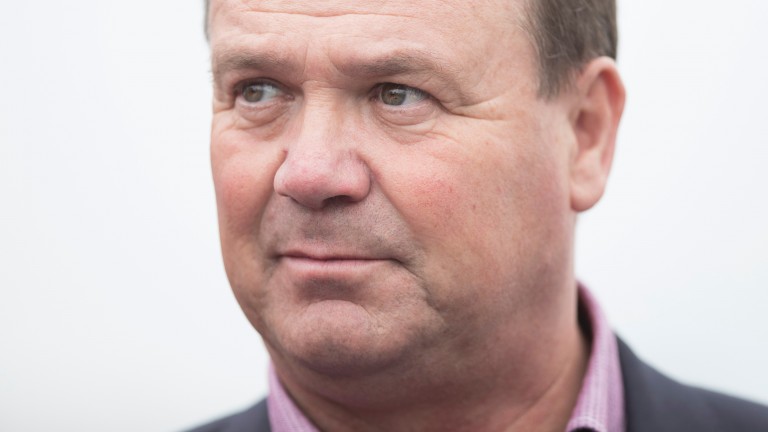 Michael Halford: trainer of Duchessofflorence, who is seeking a first win on turf
Patrick McCann
1 of 1
By Tony O'Hehir 6:00PM, MAY 24 2017

Like many of her stablemates, Duchessofflorence has enjoyed plenty of success at Dundalk, with all of her three wins coming on Polytrack, but on Thursday she will be seeking a maiden win on turf when she takes on five rivals here.

The Michael Halford-trained five-year-old finished runner-up at Dundalk on her last two starts but has been placed on turf, and her trainer said on Wednesday: "She's had a little break and is in good form. The Polytrack seems to be her preferred surface but she has been placed many times on turf and is going there with a realistic chance."

The Willie McCreery-trained Zamira, who got off the mark when landing a maiden over a similar distance at Roscommon 17 days ago, was raised 9lb for that two-and-a-half-length victory.

Nanabad, who is dropping back to handicap company following two runs at Listed level, represents Jarlath Fahey and is fitted with cheekpieces for the first time.

The Eamonn O'Connell-trained Papal Parade, twice successful over 1m2f last season, is having her first run of the year.

Completing the line-up is Lily The Lioness, Garrett Power's versatile performer who last ran in October. A three-time winner over hurdles and also over fences, both of the ten-year-old's Flat wins have been achieved over this course and distance.

FIRST PUBLISHED 6:00PM, MAY 24 2017
She’s finished second on her two starts this season and we’re hoping she can go one better this time