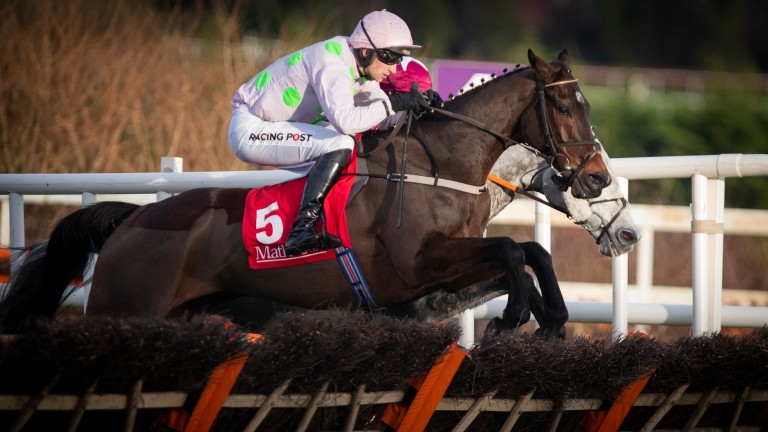 Sharjah: goes ahead of Petit Mouchoir after jumping the last in the Matheson Hurdle at Punchestown
Patrick McCann (racingpost.com/photos)
1 of 1
By David Jennings UPDATED 8:40PM, DEC 29 2019

The Unibet Champion Hurdle picture might remain murky, but two things are crystal clear after the Matheson Hurdle: Sharjah is a seriously smart sort on his day and Patrick Mullins is one of the best amateurs we have seen.

Rewind 12 months and Sharjah was spoiling the Samcro party. This time it was Klassical Dream who was sent off a warm order, but he stumbled badly at the fourth hurdle and trailed in a distant last of the five runners as his lesser fancied stablemate stole the show once again.

It was a 14th Grade 1 victory for the winning jockey, some going for an amateur who towers above six feet tall, and Sharjah has now supplied him with two of those as well as a Galway Hurdle.

It is blatantly obvious the pair get on terrifically well together and they are likely to be reunited in the Champion Hurdle for which Paddy Power make him a 10-1 shot (from 25-1). He is as short as 7-1 with bet365.

Epatante started the day as the 7-2 joint-favourite but was trimmed a point into 5-2 after Klassical Dream’s tame display. The Supreme winner is now out to 10-1 (from 7-2) and has serious questions to answer.

Sharjah has been answering almost all the questions thrown at him in the last year and, apart from a lethargic effort on unsuitably soft ground in the Morgiana, his CV is starting to look impressive.

Who knows what might have happened had he not been brought down by Buveur D’Air at the third in the Champion Hurdle and Patrick Mullins was full of faith going into the Matheson. 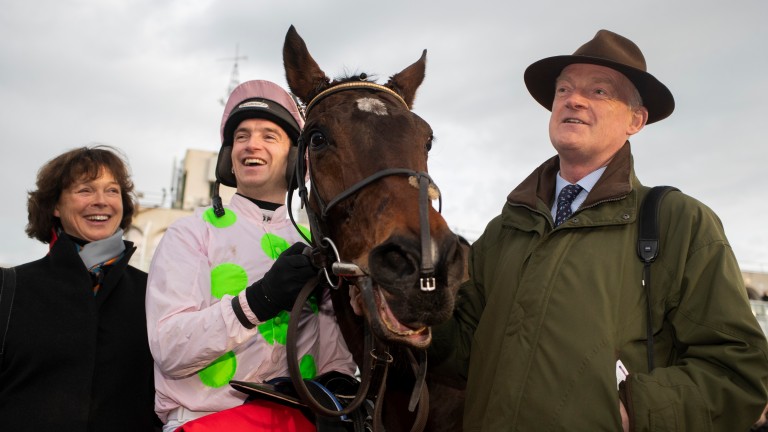 "I fancied him coming here today as the ground had come right for him. He likes that ground,” said the winning rider.

"They went very hard early on, but then when Klassical Dream made the mistake it slowed up. I was able to come and take Petit Mouchoir when I wanted just before the last.

"I am always wary of Rachael’s horses as they always find plenty. I knew I needed a good jump at the last and I got it. I'd love another crack at the Champion Hurdle on him.

"Back in last season's Champion Hurdle I thought we had a lovely position and he was handling the ground before Buveur D'Air fell and brought us down. With hindsight, if I had got him beaten in the Galway Hurdle with stones in hand it would have been some disaster!"

There were eight and a half lengths further back to Coeur Sublime, with Davy Russell reporting to Gordon Elliott that the Triumph Hurdle runner-up made a noise during the race.

"I could see that Patrick was really content on Sharjah the whole way," said trainer Willie Mullins. "I knew by the way he was sitting.

"But then, when Klassical Dream came up his outside I said he's going to bring him into the race too quickly. But what could he do?

"Patrick had to go with him. I'm sure he didn't want to challenge until much later and use his speed, but he ended up having to go with Petit Mouchoir down to the last.

"Ruby [Walsh] was reminding me there that if he hadn't been brought down last year, he might have been second or third in the Champion Hurdle. He's a good horse on nice ground.”

The champion trainer expects Klassical Dream to be sore after his mid-race mishap.

Mullins said: "When he took off at that hurdle down the back, I just took down my binoculars because I thought he wouldn't even make the hurdle. I don't know how he got over it.

"He seems fine but I'd imagine he's going to be very stiff in the morning with his hips or pelvis, or whatever. He dragged his hind legs through.

"Paul [Townend] got him back into the race but that effort had taken too much out of him."

So, what of the trainer’s son?

"It’s extraordinary stuff really, what Patrick has done over the last few days. To have won down in Limerick on Faugheen and now this.

"Rich [Ricci] likes him riding his horses when he can and when the opportunity arises. He even got to ride Douvan and it works out well for him most of the time," Willie said of Patrick.

This was another occasion when it worked out wonderfully. The amateur looked the ultimate professional once again.

FIRST PUBLISHED 2:44PM, DEC 29 2019
I fancied Sharjah coming here today as the ground had come right for him