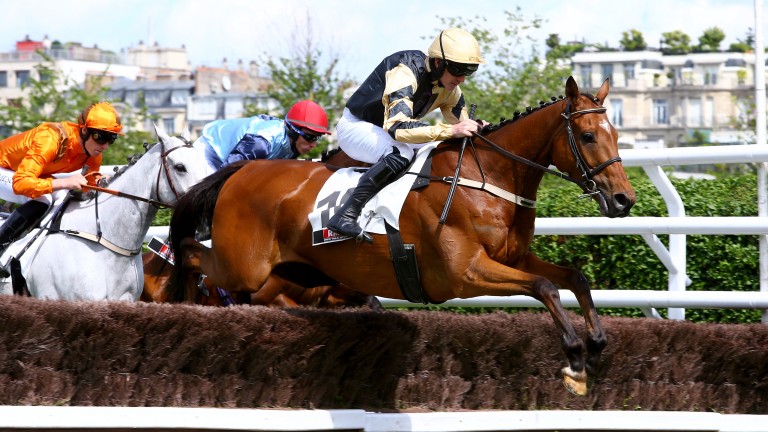 Shaneshill clears an obstacle en route to winning the Prix la Barka at Auteuil on Saturday
1 of 1
By Scott Burton 5:52PM, MAY 20 2017

Ruby Walsh galvanised Shaneshill on the run-in to overhaul L'Ami Serge as the visitors reeled off a sixth consecutive win in this race, four of which now belong to Willie Mullins.

Walsh had dictated a moderate pace aboard Shaneshill, who had suffered a dip in form in his previous two starts since landing the Grade 2 Galmoy Hurdle in January.

"He made a mistake four out but Ruby just gave him a breather turning for home and I hoped he might have enough to get in the first three," said Mullins. "Once they got over the last he just had that bit more left in the tank."

Mullins added: "Shaneshill is a good horse who has training difficulties and maybe now he's coming back to himself. He'll definitely return here in three weeks [for the French Champion Hurdle]."

While Mullins accepted the trophy for the fourth time, Walsh appeared delighted with his more unusual prize, a hoverboard! 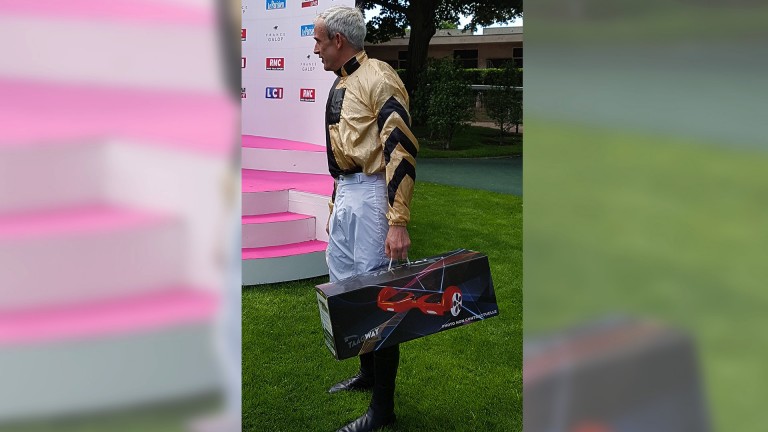 Perfect prize: Ruby Walsh won a hoverboard for Shaneshill's win at Auteuil
At Cheltenham in the County Hurdle it was Arctic Fire who swooped late to deny L'Ami Serge, and owner Simon Munir - who enjoyed an otherwise near perfect afternoon at Auteuil with three winners on the card - once again saw victory snatched from his grasp late in the day.

"He's so enthusiastic and those obstacles are made for him, being halfway between a hurdle and little fence," said trainer Nicky Henderson.

"He looked as if he'd come and won his race, and then Ruby's has just stayed a bit better. Three miles has never been on the agenda but I wouldn't want to rule it out."

Guillaume Macaire saddled the 1-2 in the Prix Questarabad with Munir's Prince Ali and rider Kevin Nabet getting the better of long-time leader Candide, a Group 3 winner at two on the Flat for Andre Fabre. Neither is likely to line up in the Grade 1 Prix Alain du Breuil next month.

The Mullins-trained Merie Devie appeared not to enjoy her rehearsal when finishing tailed off here, although her trainer still expects to be represented in the Alain du Breuil by Punchestown festival winner Bapaume.

FIRST PUBLISHED 4:31PM, MAY 20 2017
He is a good horse who has training difficulties and maybe now he's coming back to himself. He'll definitely come back here in three weeks