News Legends Of The Turf 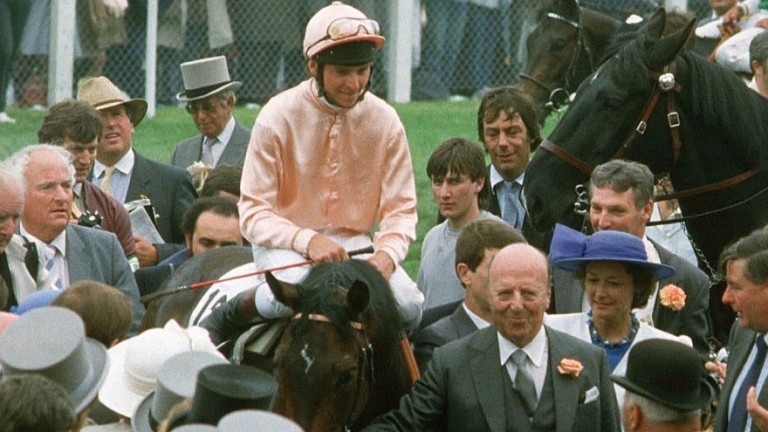 Steve Cauthen, forever associated with the early glory days at Warren Place, is among the latest names to be added to the Hollywood-style 'Legends of the Turf' walk along Newmarket High Street.

The three-time champion jockey, who shared many famous victories with Sir Henry Cecil, including the 1985 Derby on Slip Anchor, features on one of the stone slabs laid last weekend. Another stone was dedicated to King Charles II to mark 350 years of racing in the town.

The project began in 2014 and already features the likes of Cecil and Frankel.

Cauthen could not be there in person to unveil his slab, so the duty was undertaken by Slip Anchor's former lad Dave Goodwin together with pupils from Newmarket Academy.

Trainer Sir Mark Prescott was on hand to perform similar duties for two slabs connected to his Heath House yard, one for former incumbent Mathew Dawson and the other for the latter's former trainee St Simon, regarded by many to be the greatest racehorse of the 19th century.

Typically, Prescott still has a daily reminder of St Simon on the premises at Heath House, he said: "St Simon was a great horse and won the Ascot Gold Cup by 20 lengths. We still have the skin of the horse in a glass frame on our tack room wall alongside some of the other greats to have been trained at Heath House in the past."

In all, seven slabs were added on the north side of the High Street, the others being champion jockey Doug Smith, Triple Crown winner Bahram and popular local figure Allfie Westwood.

Trainer and organiser John Berry said: "Sadly, Alfie died last year but he was a stalwart of the racing museum here and his love of the sport has been passed onto many generations of children. It's great that we remember him in this way."

FIRST PUBLISHED 1:34PM, DEC 21 2016
We still have the skin of the horse in a glass frame on our tack room wall alongside some of the other greats to have been trained at Heath House in the past.

Here's to you Doc, a great and dynamic broadcaster Dettori reunites with Logician as Royal Ascot candidates are put to work 'Since lockdown has ended drivers seem to be in more of a rush than ever'