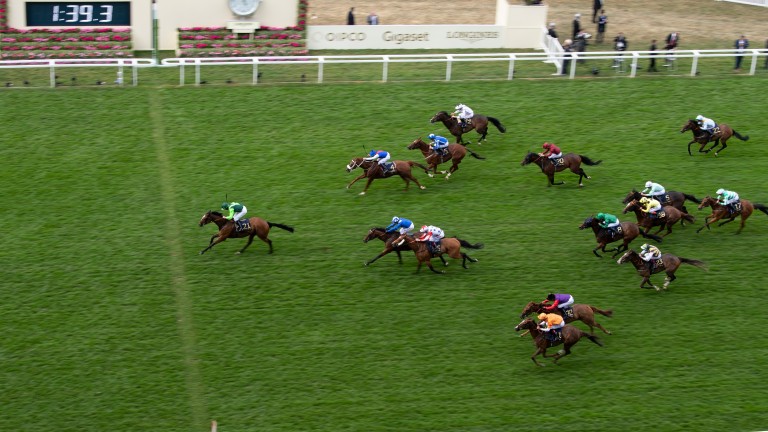 Settle For Bay and Billy Lee win the Royal Hunt Cup in fine fashion
Edward Whitaker
1 of 1
By Lewis Porteous UPDATED 11:07AM, DEC 19 2018

David Marnane described the cut-throat nature of training in Ireland as “a battle” but it was all worthwhile as Settle For Bay spreadeagled a bumper field of 30 to land the Royal Hunt Cup with relative ease.

As his lip quivered and he fought back the tears, Marnane’s second Royal Ascot winner clearly meant every bit as much as the first, and perhaps a little bit more, after a plan hatched last year came to fruition in style.

“It’s a tough, competitive game and we’re only a small yard with 20 horses, but we’ve won the Wokingham and the Hunt Cup now and we’ll keep trying,” said the County Tipperary trainer, whose previous winner at the meeting was Dandy Man in 2012.

He added: “We knew three-quarters of the way through last year he was this sort of class, and he progressed all along, but it’s one thing to have that and another to get him here.

Settle For Bay denied a favourite carrying the colours of the Queen, Seniority, and well-supported runner-up Afaak to spark wild celebration in the paddock as owners Maurice Casey, Dennis McGettigan and their families danced with joy.

While it was plain sailing for Settle For Bay in the race, Marnane described how the four-year-old had overcome a serious injury sustained when leaving the stalls at Dundalk in May last year.

“He’s always been a very good horse but has had his injuries,” said the trainer. “He broke his pelvis last year and has done remarkably well to do what he’s done.

"I’d like to come back here on King George day, but it depends what the handicapper does.”

Like Marnane, winning rider Billy Lee was also celebrating his second Royal Ascot winner after Roca Tumu’s success in the 2013 Britannia, and he could not believe the ease with which this one was achieved.

“He got into a rhythm very quickly and was going well within himself,” said the winning rider.

“Just at the three pole I gave him a squeeze to go forward and he came on the bridle well, and I knew he had a serious chance. I could have done with a lead for a little longer but he’s won as he’s liked.”

Heaping praise on Marnane, Lee added: “David goes about his job quietly but gets plenty of winners every year and always has a good horse.

"He knows how to prep one and this horse was in great shape today – full credit to him.”

FIRST PUBLISHED 11:03AM, DEC 19 2018
It’s a tough, competitive game and we’re only a small yard with 20 horses but we’ve won the Wokingham and the Hunt Cup and we’ll keep trying

Love brightens the week for Aidan O'Brien but draw-bias punters are wrong-footed What heights can Love conquer now? We assess her comeback victory at Royal Ascot Bargain buy Logo Hunter on track for Group 2 after snaring another stakes prize 'He's in brilliant form' - rising sprint star Logo hunts for another Listed win