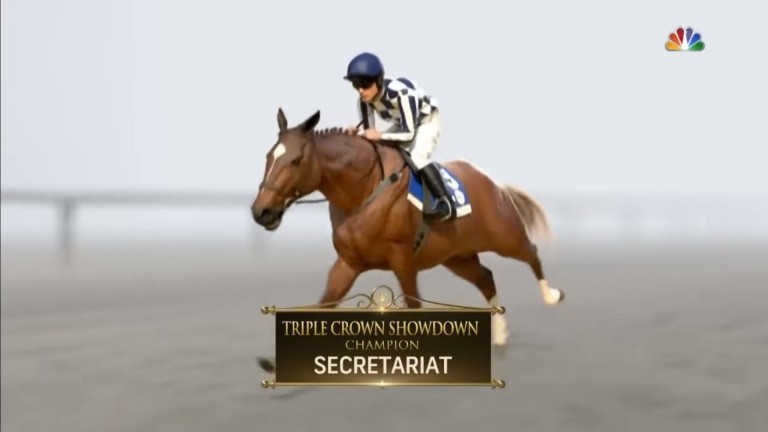 Secretariat's status as one of the greatest Kentucky Derby winners of all time was cemented 47 years on from his memorable Churchill Downs victory, as he landed the virtual Kentucky Derby Triple Crown Showdown on Saturday night.

Following on from the enormous success of the Virtual Grand National, which generated £2.6 million in bookmaker donations for NHS charities, organisers at Inspired Entertainment created a virtual clash of the 13 horses who have successfully completed the US Triple Crown.

Officials at Churchill Downs are raising funds for Covid-19 relief through the animated contest, matching every dollar donated up to $1 million.

This year's Kentucky Derby has been rescheduled for September 5, so instead the virtual race was broadcast on NBC Sports on Saturday, the date when the actual $3m Grade 1 was originally due to take place.

Drawn in stall three, Secretariat hugged the rail just off the pace in midfield early on before making progress down the back straight and taking aim at the pace-setting Seattle Slew turning in.

Affirmed, who was the 1978 Triple Crown champion, ran on well for fourth after lacking the winner's turn of foot at the top of the straight, just behind third-placed Seattle Slew.

Earlier this week it was announced that racing at Churchill Downs is set to resume behind closed doors on May 16.

Donations to support Covid-19 relief through the Kentucky Derby Triple Crown Showdown initiative can still be made here.

FIRST PUBLISHED 11:24AM, MAY 3 2020
Officials at Churchill Downs are raising funds for Covid-19 relief through the animated contest, matching every dollar donated up to $1 million