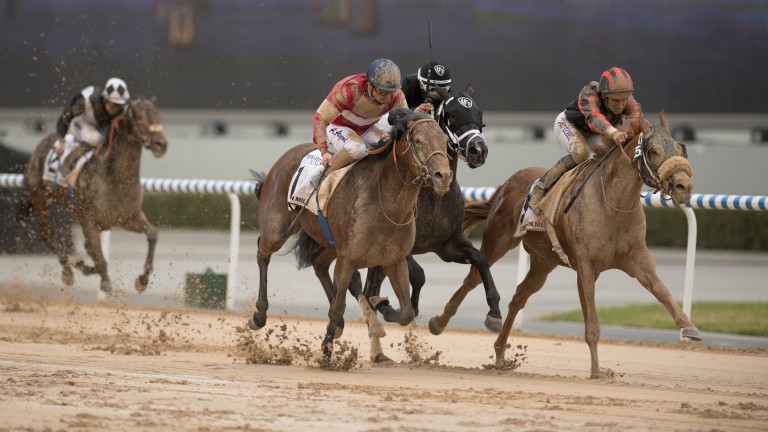 The Group 2 Godolphin Mile, run as the first race this year and on a dirt surface described as muddy after two days of heavy rain, was won for the second year running by local champion trainer Doug Watson.

Having saddled the 1-2-3 last year, led home by Sam Hitchcott and One Man Band, Watson had to settle for just the winner this year with stable jockey Pat Dobbs steering Second Summer to a neck victory over Ross.

That was his planned prep for the World Cup itself, but with no invitation forthcoming for the feature, he was diverted to this lesser, shorter, contest.

Slowly away, Dobbs found himself in last early on and it was only approaching the home straight they made any real progress.

Market principals North America and Sharp Azteca looked to be in pole position at this point, but it was Second Summer and Ross who came through with a strong run in the final two furlongs, with the former just holding on.

Watson said: “He was just a bit sore after Super Saturday; it was nothing major and we knew he was in good shape.

“It was a shame to miss the World Cup because we thought he was a genuine contender but it is great to win this race again.”

The race was marred by a fatal leg injury to Stormardal, who unseated Adrie de Vries over a furlong out when in midfield.

Christophe Soumillon left it late on Godolphin’s Thunder Snow, who led on the line to land the Group 2 UAE Derby.

In a battle of the Christophes, Epicharis, seeking to emulate Japanese compatriot Lani who won the dirt Classic 12 months ago, tried gamely to make all under Christophe Lemaire.

It looked as though he would, seeing off the chasing Cosmo Charlie, winner of the course and distance Al Bastakiya on Super Saturday, on the home turn.

The Marco Botti-trained Qatar Man was next to retreat and it was left to Soumillon and this year’s UAE 2000 Guineas winner Thunder Snow, a Group One victor in France last year, to throw down the final challenge.

He asked his mount to chase over a furlong out but Lemaire was getting every assistance from Epicharis and Soumillon’s efforts appeared fruitless.

However it was one last crack of the whip that proved decisive as Thunder Snow responded gamely to snatch the spoils, providing Saeed bin Suroor his eighth victory in the race.

Bin Suroor said: “He's a very good horse who we thought would stay. He's a Group One winner and handled the dirt well in the Guineas.

“We'll take him back to Europe and see how he comes out of this before making firm plans but he's an exciting prospect.”

What better way to celebrate your first winner as a trainer than with a horse you part own in a Group One contest on foreign dirt?

Well that is now the claim to fame for Chad Summers, who having saddled just a handful of runners since being granted a licence in America last month, witnessed Mind Your Biscuits run out a convincing winner of the 6f Golden Shaheen.

Summers said: “Everyone told us the widest draw of all in 14 was a big negative but we were never concerned; we knew this horse is a closer and would be challenging from the rear anyway.

“What a great way to get a winner on the board as a trainer!”

The dirt dash looked competitive on paper with a case to be made for most of the 14 runners but very few actually managed to land a blow.

Early leader My Catch was passed by Stallwalkin’ Dude with less than two furlongs to go, stalked by Morawij, winner of the course and distance Mahab Al Shimaal on Super Saturday.

Godolphin’s Comicas mustered a challenge, briefly looking the likely winner, but down the middle of the track, Joel Rosario was making relentless progress aboard Mind Your Biscuits.

The son of Posse swept to the front less than a furlong out with Stallwalkin’ Dude weakening out of contention, while Comicas finishing three lengths back in second and Morawij a short-head behind in third.

Rosario said: “That was impressive and he did it in style. We were pretty confident before the race but could not have expected him to win like that.”

FIRST PUBLISHED 12:03PM, MAR 25 2017
It was a shame to miss the World Cup because we thought he was a genuine contender but it is great to win this race again