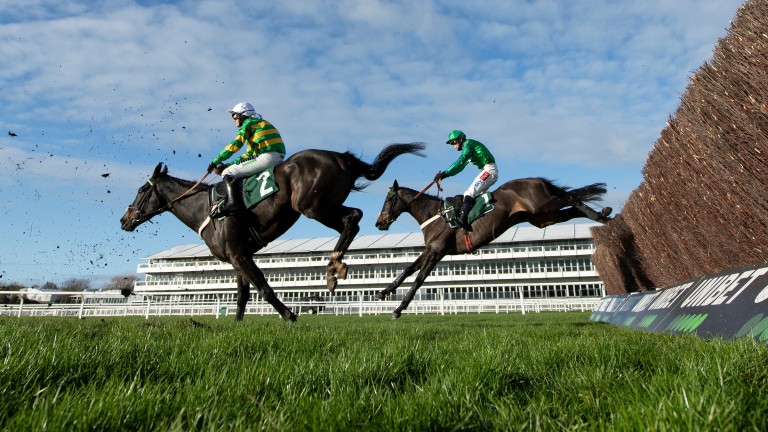 Nicky Henderson saddled half of the field of four in the in the 2m4½f novice chase, but his number one hope and Supreme Novices' Hurdle third Chantry House floundered in the testing conditions behind stablemate Fusil Raffles, who bounced back to his best to land the spoils.

Chantry House was sent off the 8-11 favourite to back up his winning debut over fences at Ascot last month, but never looked comfortable under Nico de Boinville and was beaten ten lengths in third.

His disappointing performance left Fusil Raffles to pick up the pieces for the Seven Barrows trainer and gain a third win over fences from four starts.

Saturday reaction: 'My instinct is he's not a Grade 1 performer - yet'

The Grade 1 winner was a disappointing third in a Grade 2 novice chase at the November meeting, but banished that below-par performance and was introduced at 16-1 for the Marsh Novices' Chase at the Cheltenham Festival by Betfair Sportsbook and Paddy Power.

"Nico said Chantry House got stuck in the mud but it was a good performance by Fusil to give weight away," Henderson said. "I have been dying to step him up to two-and-a-half miles but the races kept falling nicely over two miles. I think he won here because he stays and he did it really, despite the ground.

"Daryl said he had a hard race, so we'll put him away now and then I would imagine he'll have one run before coming back here for the Marsh."

Lieutentant Rocco split the Henderson-trained duo in second place, while Quel Destin put up another disappointing effort over fences and was pulled up by Harry Cobden before the second-last.

The three-year-old finished second behind Duffle Coat in a Grade 2 at the track last month and was sent off 4-9 favourite to get back to winning ways.

He duly obliged by four and three-quarter lengths to earn quotes of 20-1 for the juvenile championship contest at the Cheltenham Festival with Betfair Sportsbook and Paddy Power. 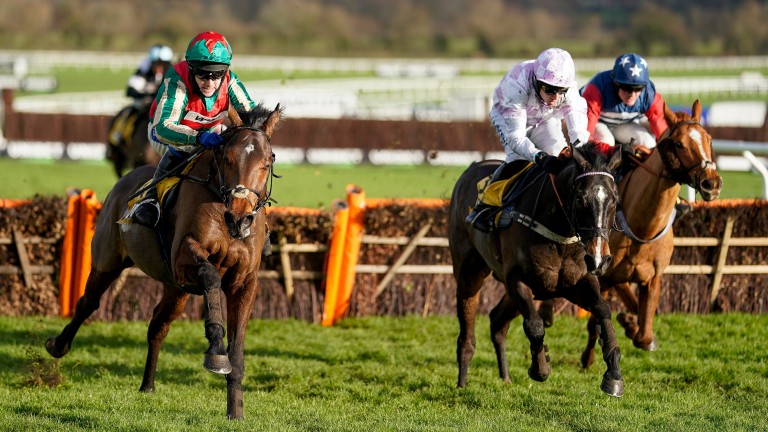 "I expect we'll all want to go to the Triumph but he could get an entry in the Fred Winter. We'll see what happens in the meantime. It's handy that he goes on this ground and better ground too, so is versatile, and has a nice bit of ability."

Adagio's victory was the first leg of a double for Scudamore after the Jonjo O'Neill-trained Sky Pirate's impressive victory in the 2m½f handicap chase.

Sir Alex Ferguson's decision to hop aboard a helicopter to watch Monmiral in the Summit Juvenile Hurdle at Doncaster was vindicated in terrific fashion as he rocketed into the reckoning for the Triumph Hurdle following an easy success in the Grade 2 contest.

Ferguson part-owns the three-year-old with Ged Mason and the Hales family, and despite making a significant blunder two flights from home he cruised into the lead and was never asked a serious question by Sean Bowen to win by 11 lengths.

"He's a lovely type and I like him a lot," Bowen said. "He probably got there a bit too soon because he was travelling and winging hurdles and he'll be better with a lead for longer. He was just looking around in front [at the second-last] and then I got after him and he winged the last."

The winner was cut to 12-1 (from 25) for the Triumph Hurdle after he maintained his perfect record and posted a second victory since switching to the care of Paul Nicholls from France.

Paddy Brennan and Fergal O'Brien's fine season shows no signs of stopping after Hurricane Harvey gamely battled to victory in an gruelling running of the December Novice Chase, which took the trainer past last season's tally of winners.

Tom Bellamy set out to make all on Milanford and looked to have his rivals under pressure in the home straight, however they were swallowed up by Brennan on the six-year-old at the second-last fence and while Milanford closed once again towards the line, he held on to win by a length and a quarter. 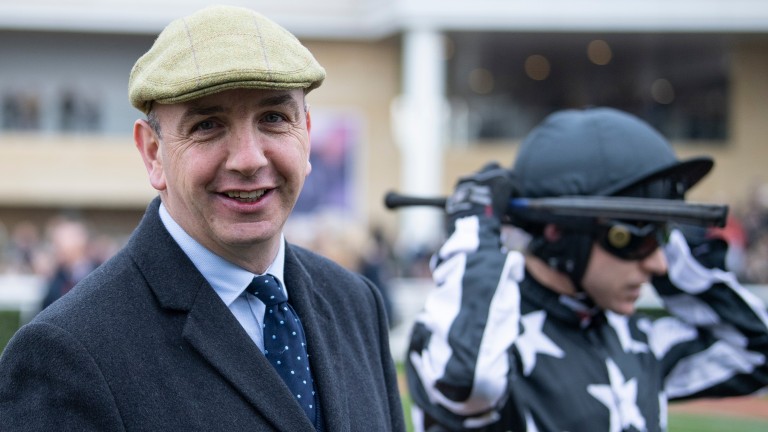 O'Brien said: "He's not a natural and takes a bit of work and we do plenty of jumping with him at home. He's honest, goes on any ground and gets the job done. We were thinking about the Kauto Star at Kempton, but that might come a bit soon and we'll just enjoy today."

It was a first victory at Grade 2 level for the duo since November 2018 and a 64th winner of the season for O'Brien, surpassing last season's tally of 63 already with over four months of the jumps season left to run.

Following his success, Hurricane Harvey was introduced at 33-1 by Betfair Sportsbook and Paddy Power for the 3m Grade 1 novice chase at the Cheltenham Festival.

The five-year-old got off the mark over hurdles by 13 lengths at Gowran Park last month and the 12-1 shot put up another impressive performance under Richard Johnson to give the County Meath trainer his first victory at Grade 2 level.

Make Good was trimmed to 25-1 (from 100) for the race that carries the same title at Cheltenham Festival in March.

Tom Lacey has a promising team of novice hurdlers among his ranks for this season and L'Incorrigible looks destined for loftier targets following his easy victory in the opening 2m½f novice hurdle at Doncaster, the first leg of a double for the trainer and jockey Robbie Power.

The five-year-old was an impressive winner of a bumper in November 2018, but the long absence proved to be no issue as he maintained his unbeaten record in impressive style by four-and-three-quarter lengths.

Power said: "He's been off the track for two years and is a horse with a lot of ability. He did everything wrong – he was fresh and keen – and I thought he might have done too much. It's good to get that one out the way and he's a nice horse going forward."

The combination doubled up on the card when Vado Forte took the 2m½f handicap chase to give Power and Lacey their third victory from nine rides when they have teamed up together.

The trainer added: "L'Incorrigible is a good horse and we're fortunate to have him. He had a stress fracture and then a tiny fracture of his pelvis, but we've given him the time he needs. The immediate reaction is to have a go at a big target, but we'll bring him along slowly.

"Robbie Dunne said the ground at Chepstow last time was quite holding for Vado Forte and we thought this type of ground at Doncaster would be up his street. He's been so consistent and deserved to win a race."

FIRST PUBLISHED 12:51PM, DEC 12 2020
Daryl said he had a hard race, so we'll put him away now and then I would imagine he'll have one run before coming back here for the Marsh