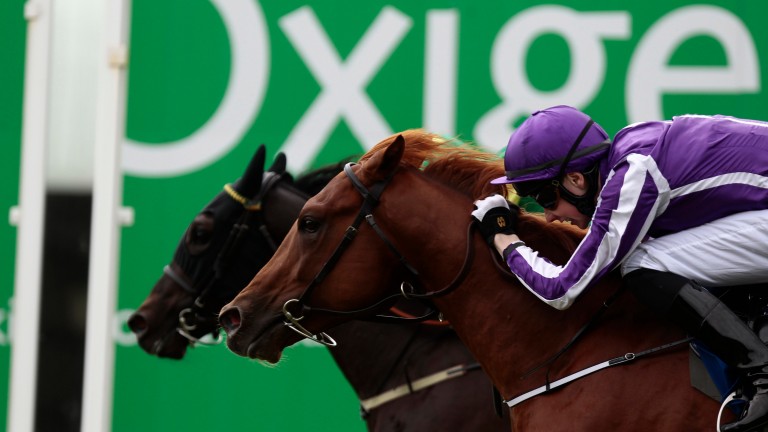 Australia (near side) went close on his debut at the Curragh in 2013 and won the Derby and Irish Derby the following season
Patrick McCann
1 of 1
By Matt Butler UPDATED 8:36PM, JUL 1 2019

Anthony Van Dyck became the 30th different Classic winner for Aidan O'Brien in Britain and Ireland since the start of 2010 when pouncing at Epsom and could double up in the Dubai Duty Free Irish Derby at the Curragh on Saturday.

But the Irish Derby festival as a whole may prove crucial with a view to next year's Classics. After all, the Derby hero made his debut at the same meeting a year ago – and so did many other future Ballydoyle superstars.

Stars of the future

Anthony Van Dyck finished seventh in the 7f maiden (6.15 Thursday) with talented stablemates Norway and Mount Everest in front of him.

It was also the starting point for 2014 Derby winner Australia, who performed better to finish second in the same race, while Roderic O'Connor, who struck in the 2011 Irish Guineas, and Gleneagles, who did the Guineas double, won the contest on their second starts.

Furthermore, Irish 1,000 Guineas victor Misty For Me, shock Oaks winner Qualify and dual Guineas heroine Hermosa kicked off their two-year-old campaigns with defeat in the 7f fillies' maiden at the same meeting (5.45 Thursday).

Even away from the Classic winners, it is a tremendous scouting opportunity for future high-class performers as Group 1 scorers Happily and Alice Springs won it, while Rhododendron also took it in. 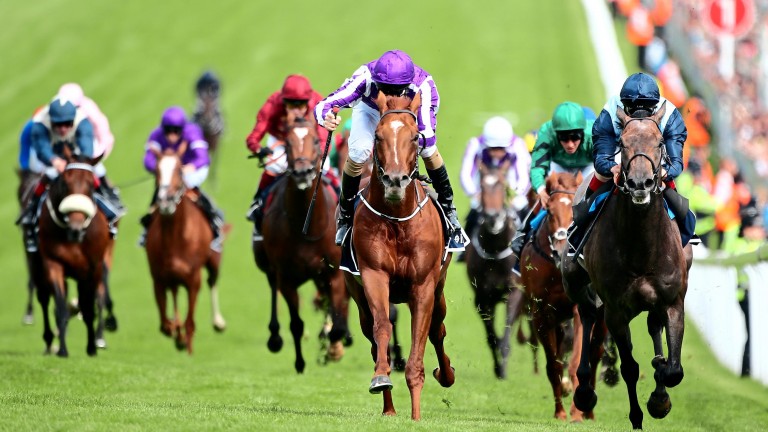 The Irish Derby meeting also brings together O'Brien's favourite course for introducing a Classic horse and his preferred time of year.

The master of Ballydoyle has won 40 British and Irish Classics since the start of 2010 and, unsurprisingly, the home of Irish racing has been the starting point for the largest number of his Classic aces. Of the 30 individual winners in that period, 12 had their first race at the track, although one of them, 2013 Epsom king Ruler Of The World, was an anomaly in debuting at the age of three.

Leopardstown is next best as a location for spotting O'Brien's future Classic stars, with eight beginning their careers on the outskirts of Dublin, while five started at Naas.

The starting point for an O'Brien-trained Classic champ has ranged from late April to early October of their juvenile season – Homecoming Queen, the 2012 1,000 Guineas winner, began her racing career on April 30, while Marvellous, triumphant in the Irish equivalent in 2014, had her first and only start as a juvenile on October 9 – but June is the best month for spotting the debut of the next potential champion out of the Ballydoyle pipeline.

Ten of the 29 individual Classic winners who ran as two-year-olds (Ruler Of The World the outlier) had their first outing in that month. 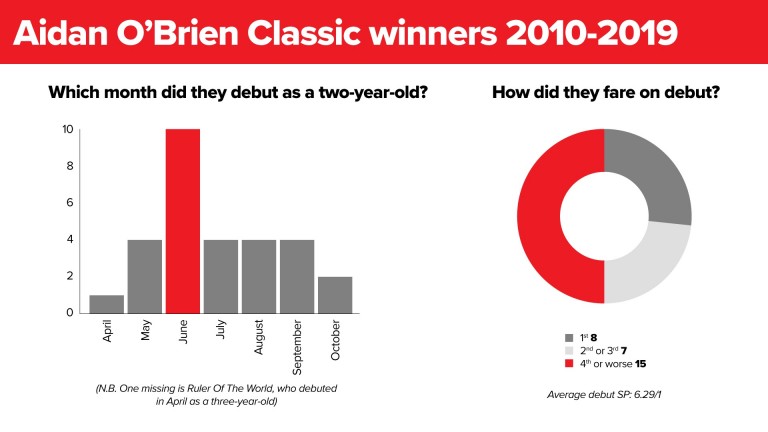 Should we expect them to win first time up?

Do not dismiss an O'Brien horse if they are beaten first time out. While eight of O'Brien's Classic winners made a perfect start, half of the 30 finished fourth or worse. They include St Leger star Leading Light, beaten 15 lengths at Galway, and Misty For Me, who finished tenth and 19 lengths behind on her debut at the Curragh, but landed the Irish 1,000 Guineas in 2011.

The market is also not the best indicator of future stardom as the average starting price of the 30 on debut was 6.29-1, with six starting at double-figure odds up to 20-1. Six were favourite on debut, with two winning, but only Camelot, who captured a 2,000 Guineas and Derby double, started odds-on, obliging at 1-3.

FIRST PUBLISHED 9:00AM, JUN 27 2019
Do not dismiss an O'Brien horse if they are beaten first time out