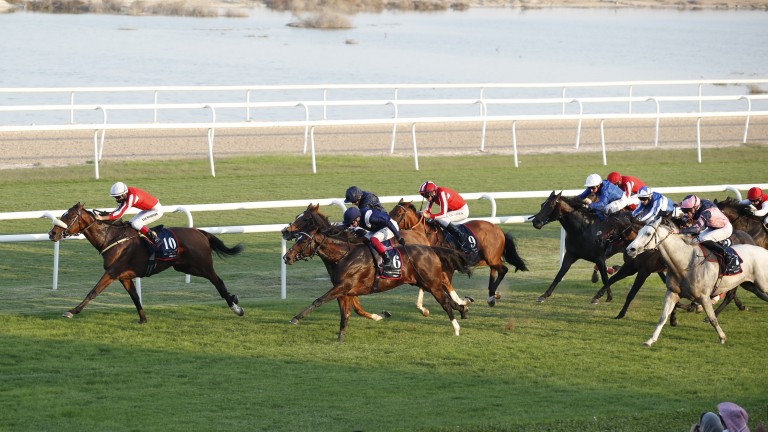 Simsir: held off Global Giant to win the Bahrain International
Rashid Equestrian and Horseracing Club
1 of 1
By James Stevens in Bahrain 3:59PM, NOV 20 2020

Scottish jockey Lee Newman was close to tears when getting within touching distance of Bahrain International glory last year and employed identical confident tactics this time around on Simsir, who stunned his ten international challengers in the £500,000 showpiece.

Last year, Newman and 22-1 shot Rustang were gunned down late by European raiders Royal Julius and Turgenev but the 2000 British champion apprentice, now based in Australia, maintained the faith in his ambitious riding style to race prominently and kick for home at the two-furlong pole.

Just like 12 months ago, Newman and his outside chance entered the final furlong with a sizeable but diminishing lead, with Frankie Dettori and Global Giant and the Ryan Moore-ridden Sovereign closing in at an alarming rate. This time, however, the line came just in time to complete the shock.

Newman said: "It was a good race run at a fair pace. I knew I needed to be close to Coolagh Forest as he'd be near the front. My horse is good but he doesn't really have that turn of foot, he's not electric with it.

"When he hit the front he wandered and I had to work at him but he kept giving. I knew he was decent and I think he's better than that too. 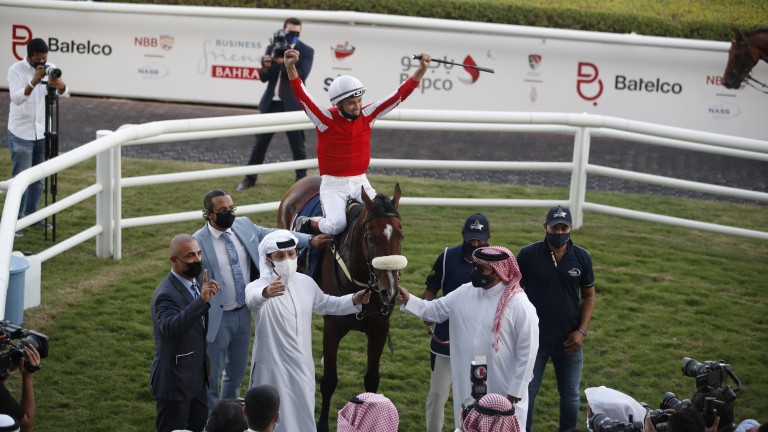 "He was a dark horse, I thought before the race I'd be in with a squeak. If you did your homework he had a strong chance of a place – he needed everything to go right and it did."

The former Mick Halford-trained Simsir was scoring on his first start for Fawzi Nass, who works his horses on the Sakhir track every day and was also responsible for fourth-place finisher Port Lions.

There was no fairytale farewell for retiring Deirdre, who was eighth, while Certain Lad, Loxley, Bangkok, Dream Castle, Desert Encounter and Lady Wannabe were out of luck in a bunched finish.

Sheikh Isa bin Salman Al Khalifa, owner of the runner-up and a key figure in the evolution of the Bahrain International, believes the result will boost chances of Group-status when assessed in the next few months.

"I'm delighted with his run [of Global Giant]," he said. "He represented himself well and it's get to have a locally-trained winner. The right horses were by the front so we hope the race will achieve pattern status next year. We'll be back next season, absolutely."

FIRST PUBLISHED 3:59PM, NOV 20 2020
If you did your homework he had a strong chance of a place - he needed everything to go right and it did