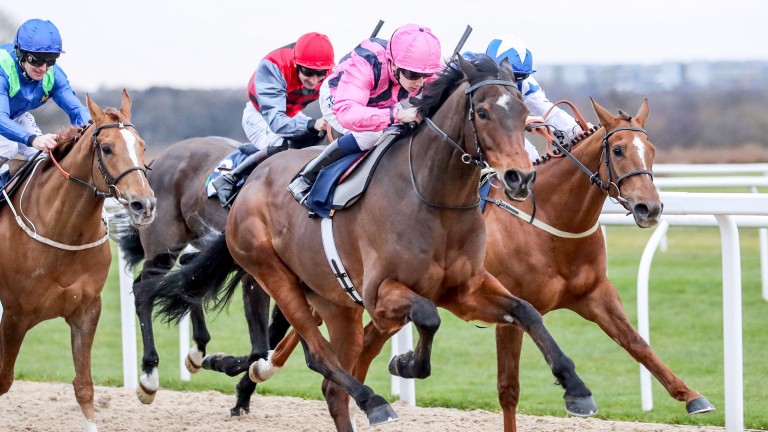 Lordship Stud owner Trevor Harris is in for an interesting spring with his 2,000 Guineas hope Swiss Storm, whom he part owns with Godolphin, but he is out to put one over the Dubai operation with Hamelin, who bids to reprise his recent first win at Newcastle in the staying event which is one of two £23,500 contests on the card.

Formerly with the late Sir Henry and then Lady Cecil, the seven-year-old was registering his first win for the latter's former assistant George Scott when coming late to to overpower Petite Jack over 1m4½f that day. He is up against Saeed Bin Suroor's Good Run, a winner over course and distance last November.

George Scott, trainer of Hamelin
He won well there last time and although he's up in trip I'm confident that given his style of racing and the way we'll ride him that he'll get it. We've no intention of going to Lingfield finals day after this as the track doesn't suit him and the plan is to go back to Newcastle for an £85,000 handicap on Good Friday.

William Knight, trainer of Gavlar
He ran well at Wolverhampton last time despite the race turning into a bit of a sprint and I'm sure this track will suit him better. He has to reverse form with a few, but he's in good form at home and I can see him running well.

Ian Williams, trainer of Byron Flyer
I suspect the galloping track will suit him better than Wolverhampton, where he finished second last time although he is up 2lb off that back of it. We're on worse terms with Calvinist, who looks to be one of a few live ones in there.

Archie Watson, trainer of Calvinist
He ran a very nice first race for us when fifth at Wolverhampton and we're still learning about him in terms of if this extended two miles is his trip.

Andrew Balding, trainer of Swashbuckle
It's his first run of the year, but he's done plenty of work and hopefully he can run a nice race. He's still down the bottom of the weights and we'll make a plan for the spring after this.

Jedd O'Keefe, trainer of Injam and Silva Eclipse
Injam stays really well but I've no idea about the surface for him. He likes slow ground so may well handle it. Silva Eclipse has run well on it before for us and was progressive last year. Both are ready to start off before we switch them to turf later on.

FIRST PUBLISHED 6:00PM, MAR 21 2017
We've no intention of going to Lingfield finals day after this as the track doesn't suit him and the plan is to go back to Newcastle for an £85,000 ha