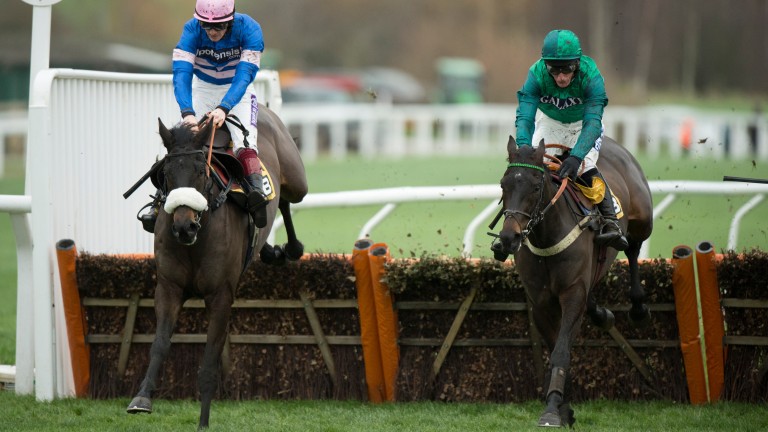 Sceau Royal (right): can fulfill his trainer's ambitions with a victory today
Edward Whitaker
1 of 1
By Scott Burton 6:00PM, NOV 4 2016

Sceau Royal put a disappointing spring campaign in Grade 1 juvenile hurdles behind him with an authoritative defeat of some smart members of that age group at Cheltenham last month.

A well-backed 8-1 chance in the Triumph Hurdle in March, he was among a number of trainer Alan King's festival hopefuls to under-perform that week, but he looked a hurdler of real promise when beating Leoncavallo and Adrien Du Pont a fortnight ago.

Zubayr was another not to show up well in the Triumph, but he had previously landed the Grade 2 Adonis Hurdle on his first start for Paul Nicholls after being bought out of the Alain de Royer-Dupre stable.

Rayvin Black and Melodic Rendezvous have winning form at this level at Wincanton, though both would appreciate more give in the ground.

North Hill Harvey was another to feature in Grade 1 action at the spring festivals, finishing ninth to Altior in the Supreme before getting significantly closer to another Nicky Henderson horse, Buveur D'Air, when fourth at Aintree.

Aristo Du Plessis reverts to hurdling for James Ewart after failing to have a cut at his fences on his chasing debut.

It is easy to have some sympathy with his trainer's complaint that a horse that has never run in graded company appears to be somewhat harshly treated as joint top-weight.

Four-year-olds dominate the head of the market here but their age group are a collective zero from 15 runners in the last ten years, including five beaten favourites.

Across the Elite and Kingwell Hurdles at Wincanton, Melodic Rendezvous has a career record of 1122.

James Ewart, trainer of Aristo Du Plessis
If this were a 0-150 race in the north, I'd tell you he had a real chance, but I've no idea if the handicapper's view of the races he's been running in is accurate. Given what, in my opinion, is the margin of difference between northern handicap marks and southern handicap marks, and the ratio of success for northern horses coming south against southern horses going north, I think that tells you all you need to know about the subject.

Alan King, trainer of Sceau Royal
Like a few of mine he was disappointing last spring, but I'm delighted with him now. He came back with another win at Cheltenham last month, which he did from good horses in excellent fashion. He has a lot of potential but I wanted to go one step up the ladder rather than throw him in at the deep end.

Oliver Sherwood, trainer of Rayvin Black
He's A1 and I just wish it were a bit softer. You don't have a lot of choice with a rating of 146. It's a nice race and he should be competitive. If it were soft ground I'd really fancy him, but he's in good form and there's no point in him sitting in his box.

Paul Nicholls, trainer of Zubayr
He ran well at Auteuil in June and this is a nice place to start a four-year-old.

FIRST PUBLISHED 6:00PM, NOV 4 2016
He has a lot of potential but I wanted to go one step up the ladder rather than throw him in at the deep end