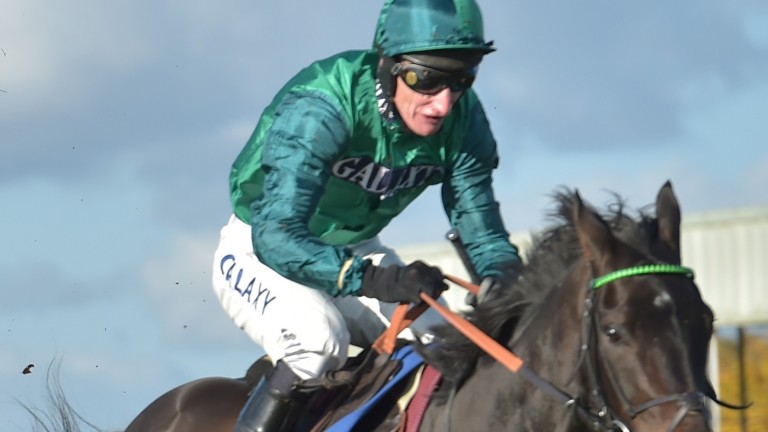 Sceau Royal: bids to join some illustrious winners of the Fighting Fifth Hurdle
Hugh Routledge
1 of 1
By Richard Birch 10:26AM, NOV 26 2016

Racing at Newcastle will go ahead following a pair of inspections of the frost-covered course on Saturday morning.

Clerk of the course James Armstrong initially called an inspection for 8am before taking a second look at 9.45am to allow temperatures to rise prior to the Fighting Fifth card.

"Last night, temperatures dipped to below freezing from 7pm onwards," said Armstrong, who kept the going at soft, good to soft in places.

"Thankfully, we've only raced on the track once prior to this meeting and we've got a great cover of grass, which has really got us out of jail."

Armstrong also thanked trainer Iain Jardine and jockey Daryl Jacob for their help in coming to the decision to race.

With racing having been given the all clear, Sceau Royal could be sent off the favourite in the feature stanjames.com Fighting Fifth, despite finishing 51 lengths behind chief market rival Apple's Jade in Grade 1 company at Aintree in April.

The likeable four-year-old, already successful at Cheltenham and Wincanton, will be attempting to join an illustrious cast to have landed this famous race, including three-time scorers Comedy Of Errors and Birds Nest, and Night Nurse, Sea Pigeon, Gaye Brief, Browne's Gazette, Kribensis, Harchibald and My Tent Or Yours.

Trainer Alan King has understandably been very happy with Sceau Royal's progress since resuming from a summer break.

"Sceau Royal was a good juvenile hurdler but has definitely improved this season, winning by 11 lengths at Cheltenham and by nine lengths at Wincanton," he said.

"Though he was impressive last time he'll definitely be more at ease in the ground than he was at Wincanton, where it was plenty quick enough for him.

"He breezed well last weekend and seems in really good order, but this is another step up the ladder and should help us find out how close we are to getting to the big players."

Apple's Jade, now with Gordon Elliott after leaving the Willie Mullins stable, was a beaten odds-on favourite on her return to action at Down Royal this month, but still finished a length and three-quarters in front of one of her Fighting Fifth opponents, Petit Mouchoir.

Elliott said: "She's travelled over well and we're looking forward to running her. You'd be hoping she's improved for her run at Down Royal, and I think she has. The ground should suit her as well."

"He had some very good runs as a novice and ran well at Down Royal on his debut for us. We think he's improved for that run."

Irving back to reclaim crown

The winner of this race two years ago, Irving is back for another crack after underperforming 12 months ago behind Identity Thief.

His trainer Paul Nicholls said: "Irving is notoriously hard to get right as he's had a few little issues, but he's in good shape right now and he does go very well fresh, which is why we've saved him for this race and not run him beforehand."

Hidden Cyclone, an 11-year-old who has won six times over fences and seven times over hurdles during a long and highly successful career, comes into this contest in decent shape, having landed a Punchestown hurdle by two and a quarter lengths from Rashaan last month.

His trainer Shark Hanlon said: "On ratings he has a lot to do. I think he's a better horse over hurdles and we know he'll handle the ground.

"He's a big price but I think he'll run well and he's entitled to be there."

Ireland have three runners, as do Britain, for completing the line-up is the Keith Dalgleish-trained Mirsaale. He has plenty to find on official ratings and looks likely to start a big-priced outsider.

FIRST PUBLISHED 6:00PM, NOV 25 2016
Though he was impressive last time he'll definitely be more at ease in the ground than he was at Wincanton where it was plenty quick enough for him