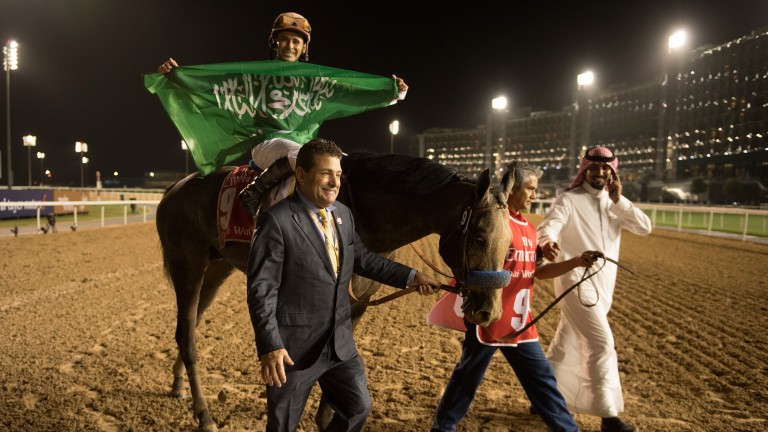 The Saudi Arabian flag is waved by Mike Smith after his win in the 2017 Dubai World Cup aboard Arrogate
Edward Whitaker
1 of 1
By Bruce Jackson UPDATED 8:21PM, JUL 26 2019

The Jockey Club of Saudi Arabia is set to announce details of a race to be held on the dirt in Riyadh next February which it claims will rival the richest in the racing world.

All will become clear on August 7, where a launch is planned in Saratoga of a new 'Saudi Cup' by the Jockey Club of Saudi Arabia, but its representative Harry Herbert, acting on behalf of Prince Bandar bin Khalid Al Faisal, who is the Jockey Club's chairman, describes it as "the world's most valuable".

The new race is scheduled to be run at King Abdulaziz racecourse on February 29 next year and Herbert said: "Since it will be a dirt race, his royal highness thought it most appropriate to announce the details in Saratoga.

"The aim is to outline the plans for the race and to talk a little about the history and potential of racing in Saudi Arabia."

There has previously been talk of such a race to eclipse the $12m Dubai World Cup in March and the Pegasus races at Gulfstream Park where there is the $9m dirt race and a $7m race on turf in America in January, which the new contest will sit between.

FIRST PUBLISHED 6:55PM, JUL 26 2019
The aim is to outline the plans for the race and to talk a little about the history and potential of racing in Saudi Arabia